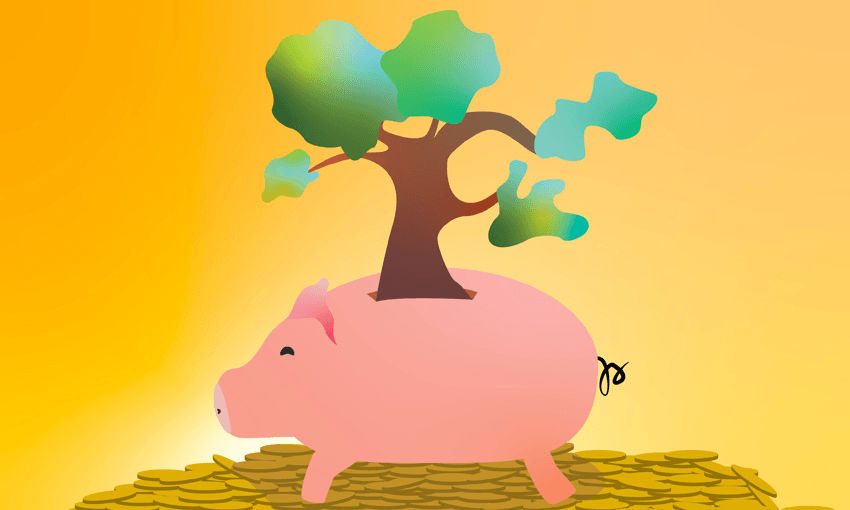 Most KiwiSaver funds are managed by one of the big Australian banks, which create returns through investments in fossil fuels, human rights violations, tobacco and weaponry. With attitudes shifting towards sustainability, what can ordinary investors do?

This month 16-year-old climate activist Greta Thunberg completed a journey across the Atlantic in a zero-emissions yacht to attend a UN conference on climate change, attracting worldwide media attention in the process. Meanwhile, between 2011 and 2016 the number of people turning vegetarian or vegan in New Zealand rose by 27%; the number of electric vehicles registered in New Zealand each month is now almost triple what it was in 2017.

But despite this increasing interest in sustainability and accountability, thousands of New Zealanders still inadvertently invest in sectors that are doing harm to the planet. Sectors like fossil fuels, tobacco, military weapons and palm oil.

Over half of all KiwiSaver accounts are with one of the big Australian banks: ANZ, ASB, Westpac and BNZ. ANZ manages the most funds of all the providers, with 25% of New Zealanders’ KiwiSaver money invested by the Australian bank. The companies ANZ invests in include fossil fuel extractors, weapons manufacturers and gambling business. It includes companies with human rights and environmental violations and those who still test their products on animals.

But there are also a handful of KiwiSaver providers dedicated to more sustainable investing, and despite popular belief, these funds are outperforming their corrosive counterparts.

MAS, an insurance and financial services firm focused on New Zealand professionals, is in charge of seven sustainable funds. Its CEO Martin Stokes says the decision to go sustainable was easy – they just listened to their customers.

“We’re part of society, we’re not just adjacent to it. We’ve come to the realisation that we need to advocate for companies that we believe will have a meaningful long-term positive impact,” he says. “In particular in a context where both the planet and humans on it are increasingly vulnerable to perils that are man made.”

A recent Colmar Brunton survey revealed 72% of New Zealanders expect their KiwiSaver investments to be made responsibly and ethically. Animal rights violations, human rights violations and tobacco were at the top of the list of sectors people wanted to avoid. But only 8% of people had actively made the move to an ethical provider.

It’s a perpetual problem for the finance sector: most people tend to switch off when it comes to money. Many of us perceive changing funds as too complicated, but in reality the whole process can take as little as five minutes.

Molly Harris Olson, CEO of Fairtrade Australia and New Zealand, says the finance world can be hard to understand. Statistics show that people do want to do what’s right ethically, but the jargon surrounding finance and investment is discouraging. She says ethical investment providers need to work on ways to make the language more accessible.

“We keep changing the language of it and it’s really hard for people to get their heads around so they end up walking away. The way we have designed the system is that it’s a ‘don’t ask, don’t tell’ economy. How do we get people engaged? It requires trust.”

This trust, Stokes says, is built through transparency and access to information. “Consumers have to ask their providers or their investment advisors for as much information as they possibly can about the definition that’s used to determine whether investments are in or out, or how they’re screened.”

Despite wanting to take an ethical approach, people are also concerned sustainable investment won’t give the same returns, says Stokes. But according to the data, the opposite is true.

“We were very mindful to look backwards and review what returns would have been over the prior 10 year period if the exclusions had been in place, and interestingly, the portfolios would have performed slightly better.”

Stokes wasn’t surprised by the data. It made sense that companies with far-reaching views on their environmental and social footprints would end up better off financially too.

“By investing in those companies that are not involved in activities that we think will do long-term harm, we are investing in a better long-term outcome. We think the evidence is that those sustainable portfolios will out-perform over time.”

At a recent sustainable investment conference, finance minister Grant Robertson said he recognises that a lot needs to change to bring the sector up to speed.

“There is still a long way to go,” he said. “Over $4 billion of Kiwis’ investments are in areas of concern. I would like to see not only more of the money invested locally, but into more sustainable and ethical portfolios.”

The problem is there’s no clear definition of the term ‘sustainable’ when it comes to investing. Former Green MP Barry Coates runs a website called Mindful Money that provides information about investing and where the money goes. He says there is a role for government in defining some of the key terms like ‘sustainable’, and ‘ethical’.

“Even within the variations of what people want, you can still define the words around investment. Some basic rules around transparency, around excluding sectors that most people don’t want to be in, but still allowing some variation for personal needs… There may be a role for government to do some regulation around this in the future.”

Stokes agrees that customers should know exactly what they’re getting with an ‘ethical’ or ‘sustainable’ fund.

“It is too easy to greenwash something without it being verified at an analytical level. At some point there probably needs to be some standards or some reference that consumers can look at.”

Transparency is important to MAS, and Stokes wants consumers to be given easier access to find out where their funds are put.

“If their funds are invested in things they’re not comfortable with, there’s an opportunity to look around and find something that might better be matched to what’s important to them and what their values are.”

He’s anticipating an emerging market for sustainable investment as more research is done about its benefits for companies and their investors. With growing consumer demand for ethical, sustainable and environmentally friendly marketplaces, it’s only so long until the big players in the financial sector have to start paying attention, he says.

“There is a strong sense that communities and individuals are demanding much more responsibility and accountability of the organisations they deal with.”

This content was created in paid partnership with MAS. Learn more about our partnerships here.