Young, healthy and pregnant, Talia Cooper’s world was flipped on its head when she discovered a lump on her breast. She spoke to Fiona Rae about becoming a mum and going through cancer treatment at the same time.

If there’s one message that Talia Cooper has for young women it’s this: know what’s normal for your body and if something feels off, go and get it checked out.

Cooper should know. In June last year, at age 30, she was diagnosed with an aggressive breast cancer, just 10 weeks after she gave birth to her first child. What followed was a whirlwind of appointments, treatment, surgery and illness before her return, a year later, to a relative sort of wellness.

“One minute I was young, healthy, about to become a mum, and then so much was suddenly taken away from me,” she says.

“So much happened in such a small amount of time, my brain literally can’t comprehend it.”

It all began with a lump in her breast when she was 29 years old and six months’ pregnant. Despite having grown up with her mum getting mammograms, Cooper didn’t think it could be cancer: “I was pregnant, so my body was changing.”

The Spinoff is holding a Pink Ribbon Breakfast in Auckland to support Breast Cancer Foundation NZ’s vital work. Join host Stacey Morrison on July 28: tickets – in the form of a donation – are available here.

Breast cancer is the most common cancer in New Zealand women, with roughly 3,300 diagnosed every year. More than 650 die annually, with Māori and Pasifika women at greater risk. Despite that, and even though Breast Cancer Foundation NZ advises women to start checking their breasts from age 20, the message that young women are at risk of breast cancer is one that sometimes goes neglected.

Cooper wishes now that she had been more aware, but she also strongly believes that better information is needed for younger women.

“I remember going into offices and waiting rooms and there were all these brochures of older women. I was already struggling and that made me feel even more alone, like I didn’t belong there.”

About 75% of breast cancers are diagnosed in women over 50. Of all breast cancers in New Zealand, 5% are under 40. While that number may seem relatively small, it still means that around 150 women like Cooper, still looking forward to motherhood, are diagnosed each year.

Breast cancer in younger women tends to be more aggressive, so it’s important to catch it early. Once Cooper’s cancer was diagnosed as invasive ductal carcinoma breast cancer, her doctors swooped in with a treatment plan that included chemotherapy, mastectomy and, as Cooper and her husband Jesse were still planning for more children, IVF.

“Everything moved so quickly – I barely had time to process it all. I was drowned in so many appointments, scans and blood tests. On the Tuesday, I was under general anaesthetic to get the portacath inserted. On the Wednesday, I was sedated in order to harvest my eggs. Then on Thursday, the chemo started, which took all day. This all happened within one month of my diagnosis.”

The process was so shocking that Cooper can’t recall telling her closest friends or family, but this is the part of the story where the power of community comes into focus. When Cooper and her husband were faced with an $11,000 bill for IVF and another $23,500 for an unfunded chemotherapy drug, they had to find the money “in the space of a week”. Friends mounted a fundraiser and raised the money to cover their costs.

“I’ve been inundated and overwhelmed with so much love and support, like with meals, people donating to the fund – Anika Moa did a performance for us,” says Cooper.

“My community has been amazing. I am quite resilient, but I’ve learned that part of resilience is asking for help. I would say that the reason I’m doing so well is because of my community, my friends, my family.”

Although people often want to help when they have a friend in need, knowing how best to pitch in can feel difficult. Cooper says that her experience has taught her a lot about how and when to offer assistance.

“I’ve learned that when people are going through grief or hardship, to be more direct – instead of asking ‘let me know when you want me to drop off dinner’, just tell them: ‘I’m going to drop off dinner on Wednesday or Thursday’.”

To help her unpack everything she’s been through, Cooper has been working with an ADHB psychologist. “I have a lot of light-bulb moments and it makes me understand the situation and myself more.”

After experiencing a post-mastectomy side effect in her arm called cording, she was funded for lymphoedema therapy by Breast Cancer Foundation NZ and attends a physiotherapy rehab class, also funded by the foundation. The physical effects of her journey have been severe.

“I’ve gone from this young, fit woman to someone who’s had a pregnancy, given birth, had a caesarean, breastfed, done six rounds of chemo, had a mastectomy, a reconstruction and lost my hair. I’m 10kg heavier,” she says.

“My body’s gone through trauma, so the physio is helping me ease my way back into exercise. I just feel weak, that’s my biggest thing – I don’t feel strong.”

The foundation’s fundraising Pink Ribbon Breakfasts have had to be delayed due to Covid-19, but once again, Cooper’s community is rallying. Two groups of her friends are hosting breakfasts where she will be the VIP. In the future, Cooper thinks it will become a tradition – an acknowledgement of the assistance she’s received throughout her treatment and recovery.

“I’m so lucky to have these support services wrapped around me,” she says.

Cooper is not entirely out of the woods. She will be taking a hormone therapy drug for the next 10 years and is currently receiving intravenous Herceptin. Her body is still recovering, and she is still processing this experience. She’s also grateful for how far she’s come and how lucky she was.

“I always knew that if you walked down the road you had no idea what was happening in people’s lives, but this has made it more apparent. I’ve had so many losses and a lot of things to be rightfully upset about or grieve, but I’m so grateful and so lucky.”

This content was created in paid partnership with Breast Cancer Foundation NZ.

Don’t let breast cancer take away time with your mokopuna. Get your mammogram so they can have more time with their kuia. Women aged between 45 and 69 are eligible for free mammograms through BreastScreen Aotearoa every two years, call 0800 270 200 to book one today.

Together, we can work towards a future with zero deaths from breast cancer. Support breast cancer awareness in October – get involved. 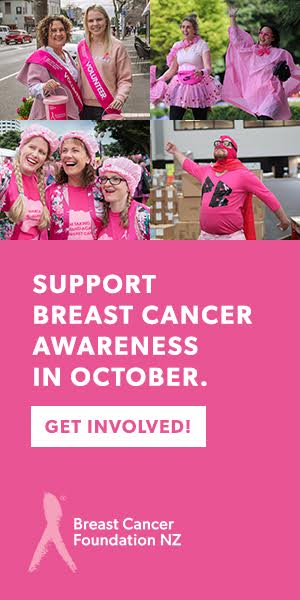