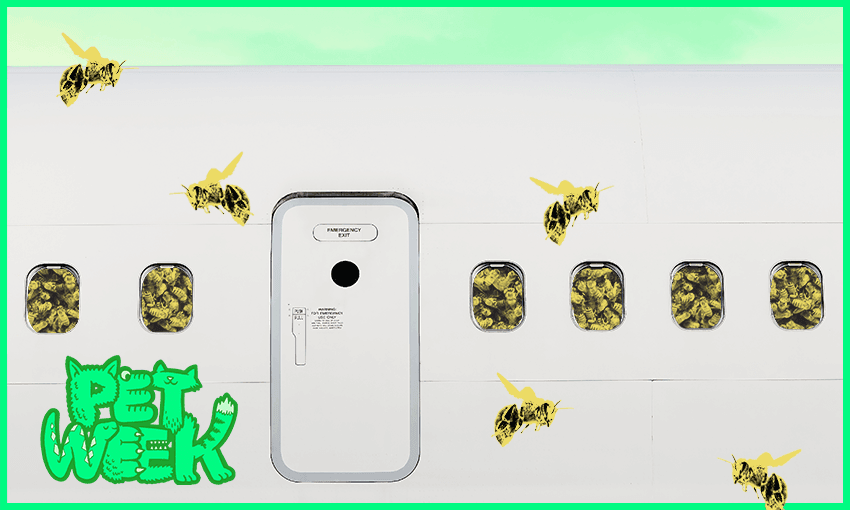 Every year millions of New Zealand bees are boarding cargo planes and jetting off on their big OE. Mirjam Guesgen finds out why.

All week we are examining and celebrating our relationship with critters big and small in Aotearoa. Click here for more Pet Week content.

The skies have been taken over by bees. Not in swarms threatening the final few weeks of barbecue season. Not milling around pools waiting to sting your bare behind. These bees are on planes (insert Samuel L. Jackson reference).

I am sure you have many questions, so let’s start with “wait, what?”

Every year, bee breeders here in Aotearoa export literally millions of live bees. We’re talking bees, queen bees, bumblebees and bee larvae. Most of them buzz off to Canada, but bees can be sent to the UK, China or the US too.

Carolyn Guy, manager of animal health and exports for the Ministry for Primary Industries (MPI), oversee the process and explains the insects’ in-flight experience. They’re packaged up into neat little wooden boxes with mesh sides, with each box containing an inflight meal of a (honey free) sugar supplement.

Just how many flyers are we talking about here? Time for a quick back-of-the-napkin calculation. According to MPI’s website, one box, weighing around one kilogram, can hold around 10,000 bees. In 2021, New Zealand exported 12,661 kilos of bees which works out at 126.6 million little-stingers, plus another 4,000 bumblebees and queen bees on top of that.

That’s not even the most bees we’ve sent flying in recent years. In 2019, Aotearoa exported more than 20,000 kilograms or some 200 million bees.

But so far this year, only 28 kilograms of bees have made the journey. MPI said they can’t comment on how many they’re expecting to make the flights. “It depends on exporters’ commercial arrangements with Canadian importers,” says Guy.

When it comes to the bees’ travel arrangements, they don’t all fly at the same time. Last year the shipments were split into 24 lots. Most of the bees fly in “bee season” – roughly between February and May. The timing is both to coincide with the beginning of Spring in Canada and to make sure we can keep our bee supplies topped up, explains Guy.

“At other times of the year, the bees go into hibernation. Bee populations increase when there is extra food during spring through to the end of autumn,” she says. So bee numbers are at a high just before we send a bunch of them off – “we don’t want to decrease our bee population,” she says – and the bees arrive ready to spread some sweet sweet pollen around Canada’s crops. That is, once they get over their jet lag (yup bees get something similar to jet lag).

And that partly explains this slightly un-bee-lievable phenomenon. Canada’s able to get much higher bee numbers earlier in their Spring by buying them from the other side of the world than they could get through “natural” bee breeding at the end of their winter. Essentially it’s taking advantage of the fact that we have opposite seasons to one another.

Getting more bees and getting them earlier means Canada’s plants get pollinated sooner and they end up with more crops overall.

But there is a downside to the bees’ international travel. Having live bees on a flight means there’s a stand-down period for all pets travelling to Canada for three months.

Sarah Thomas, director of Pet Transport, a company that coordinates sending pets around New Zealand and overseas, says she has about 20 clients with at least one pet each trying to get home to Canada right now.

“It’s a tricky position to be in – we support biodiversity here, and the importance of bees for our environment is paramount. But unfortunately, the impacts on families and their pets are very trying. We just want owners and their pets to be able to travel safely, comfortably and based around their own timeline,” she says.

Thomas adds that the pet transportation industry was hit really hard by Covid-19. When the borders first shut, more than 200 pets who were booked to fly in a single week were left grounded. Since then, they’ve been able to move a lot of those pets, but it’s still tricky because of flight shortages.

And just as international flights resumed and the country started to return to normalcy at the beginning of this year, bee season started.

“We found ourselves saying ‘oh the bloody bees!’ and then quickly adding in afterwards, ‘but thank you bees for keeping our planet alive,’” says Thomas.