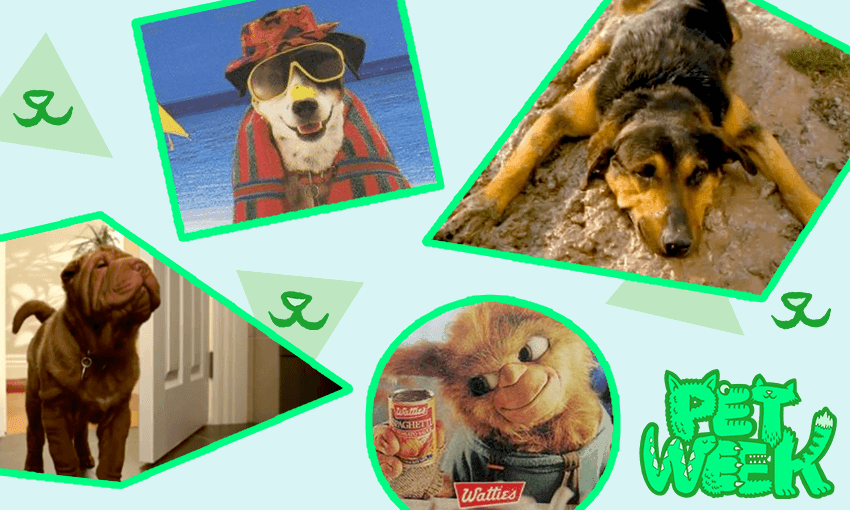 Which of our many famous TV pets will come out on top? Tara Ward looks back at Aotearoa’s rich history of animal advertising.

We are celebrating our shaggy, slithering, slobbering pets all week on The Spinoff. Click here for more Pet Week content.

Whether they’re dazzling us with a dancing dog or charming us with some other cute critter, advertisers know the way to a consumer’s heart is through an animal. It doesn’t matter if they have nothing to do with the product they’re selling – show me a cute pig on a rural road and I will buy that new phone. A heartwarming story about a homeless dog? Why yes, I will change my power provider, and thank you for encouraging me to bawl my eyes out while I do so.

New Zealand TV ads are filled with clever creatures doing astonishing things, so we’ve found ten of the best and ranked them according to a complex scientific theory that only cats and goldfish understand.

A total downer to kick things off, but what can I say? The Dulux sheepdog is a multinational fraud, Mary Lambie’s cat from Good Morning never featured on an ad and Rico the Air New Zealand mascot is a misogynistic hairball of shame. My paws were tied, let’s move on.

This popular 1991 TV One campaign featured a glittering array of celebrities and a lost dog named Toby. The six-episode series ran for five months, as the lovable mutt traveled the length of Aotearoa in search of Jude Dobson and/or his true home. The final ad saw Toby reunite with his owner on Christmas Day, and screened straight after the Queen’s message. What a wonderful world, indeed.

Farmers will tell you their working dogs are not pets, but more like colleagues. No judgement here lads and ladettes, we’re too busy clapping in time to this classic banger of a soundtrack.

This 2015 Vodafone ad warms the heart like the smell of a hot bacon butty. Man discovers cute animal, is won over by its piggish charms, and they live happily ever after in provincial New Zealand. The same thing happened to me when I met my husband. Delicious, on every level.

A surprisingly low ranking for such a high impact ad, but our tear ducts have already been taunted enough this decade and my love for slobber only goes so far. Trustpower has long relied on the emotional power of a cute dog, but this sentimental masterpiece takes it to another level, and that’s even before you find out the dog died earlier this year. All we’ll say is that if you don’t openly sob watching this love story about two soulmates finding each other, then you, good sir, are the animal.

Some readers will argue that a puppet isn’t a pet, but let’s leave them to cry their misguided tears into life’s lonely little rulebook. Ghetti was the shining star of the tinned food world in the early 90s, leading a Wattie’s campaign to get us eating more spaghetti with added processed meats. He should be the stuff of nightmares, but many of us climbed aboard the Ghetti train by collecting the labels and scamming our parents to buy the Ghetti soft toy. Great news: it’s not too late to adopt your own pet gremlin.

In 2020 we stockpiled toilet paper, but in the 90s we had such a carefree attitude to the stuff that we let a dog run amok with it through a hedge maze. Purex was onto a winner with a cute canine and a jingle that just won’t quit, and the beloved shar-pei became both an anarchistic beast of the bathroom and a superhero wrapped in two-ply. Rolly made toilet paper fun again, especially when it was soft and strong, and once we started embossing it? Absolute scenes.

This 2011 Lotto ad starred lucky dog Wilson, who took his power back from humans and played us like the fickle fools we are. From the moment Wilson leapt into the ocean to rescue a winning ticket, he led us on a desperate journey into the unknown and showed inspirational loyalty and persistence. He also proved gambling only pays if you have paws. In short, Wilson lived his best life. A dog never forgets, and $24 million lasts a long, long time.

Controversy, thy name is bugger. This Toyota Hilux ad from 1999 made headlines for repeatedly uttering the word “bugger” (humans: six times, dogs: once), attracting over 120 complaints to the Advertising Standards Authority. The ad was taken off air until the authority ruled it wasn’t likely to cause widespread offence, clearing the path to giddy television fame for sweary pets everywhere. The biggest bugger of all? Hercules the dog died in 2004.

The one and true legend of TV animals, Spot ruled our small screens from 1991 to 1998. He starred in over 40 Telecom ads, showcasing the company’s latest fax or call diversion feature and teaching us about a wild new invention called the internet.

But the wonders of technology were nothing compared to Spot himself, who fearlessly conducted orchestras and changed car tyres, swam oceans and scaled tall buildings. The perky jack russell terrier may have been Australian, but when he died in 2000 we grieved him like he was our own. In a fitting twist, the powers of the internet mean Spot will never leave us, and thank goodness for that. Thirty years later, and we’ve never needed a tiny dog with a big bag of tricks more.

Pet Week is proudly presented by our friends at Animates. For more Pet Week content keep an eye on The Spinoff and watch The Project, 7pm weeknights on Three.