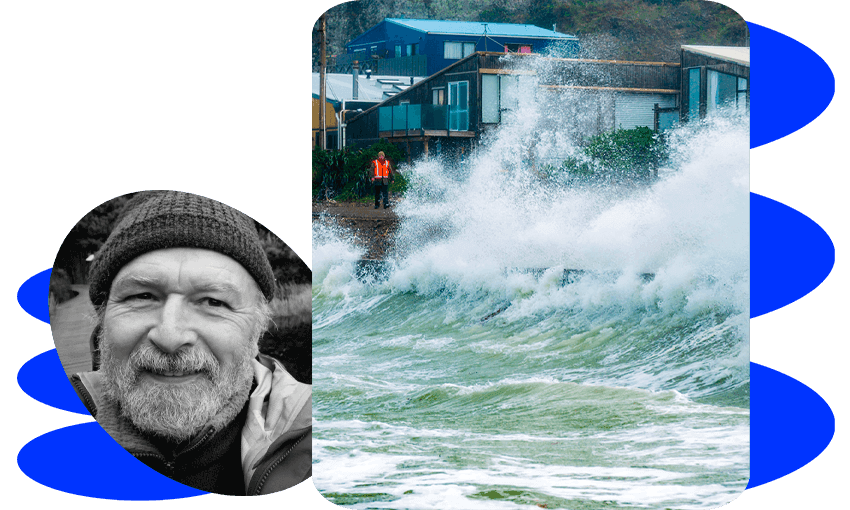 ‘Don’t run away like headless chickens’: A view from the sharp end of NZ sea level rise

Ōwhiro Bay in Wellington has become a poster child for new research showing sea levels rising twice as fast as previously thought. An environmental activist in the south coast community says warning systems are crucial, and where retreat is required, authorities need to crack on.

Down at the end of Happy Valley Road sits Ōwhiro Bay. “I tell you what. There’s nowhere in the world I’d rather be,” says Eugene Doyle. A resident and community organiser, he’s lived in the south coast suburb for “about a dozen years”, which makes him a “new boy” in the community of about 2,000 people. “It’s got that incredible combination of being a stunningly beautiful, dramatic place, 365 days of the year, and, you know, I’ve never lived anywhere that has such a tight, cohesive, supportive, fun community. We’re on this little strip of land between the sea and the high hills behind us, and every day is a great day.”

Ōwhiro Bay, which stares down the southerlies and surf that rip in from Cook Strait, has become something of a poster child for new research laying bare the scale of sea-level rise expected in the coming decades around Aotearoa. The findings from the NZ SeaRise project, published yesterday with accompanying maps, show that the estimations are understated. When you chuck vertical land movement data into the mix alongside climate-driven changes, it is suddenly, shockingly clear how much closer the tide really is. In parts of the country, the water is climbing twice as fast as previously thought.

On the south coast, a 30cm rise in sea level is now expected within two decades. “What that means is the 100-year coastal big storm surge, big coastal floods – they will be happening every year,” professor Tim Naish, a co-author of the new projections, told Newshub over news footage of waves crashing into the bay. “This place will be in serious trouble.”

The wider predicament is one locals have been grappling with for years, says Doyle. “We’ve been dealing with climate change issues – how to respond and who to apply pressure to – for some time. So in one sense this is just another chapter. But one of the great things about our community is we tend to be very fact-oriented, very science-oriented and very action-oriented. You put all of that together and I think part of that is why we’ve achieved a bit over time.”

If Ōwhiro Bay is a poster child for the sea-rise on the doorstep, it’s as an example of how to brace and prepare for those ever more frequent weather events, says Doyle. In that story, a crucial moment arrived in April 2020, when a southerly-powered storm deposited a six-metre swell across Ōwhiro Bay Parade. “We were slammed out of the blue by these massive waves,” he says. “Striking the coastline, crossing the roads, slamming into houses. There were cars moved around. Houses had their fronts stoved in, doors were pushed in. Houses were flooded. All of which would have been avoidable if the warning system that we have in place now had been in place then.”

As residents sifted through the rubble and shook themselves dry, it became clear there was no satisfactory reason for those systems not to be up and running – the science and data was all there; the information just wasn’t being shared with those in the line of the storm. The alarm was not sounded. Following community pressure, the council expedited a review. “We overhauled the region’s response to these wave events,” says Doyle. “It was just appalling what was in place before. Now there’s fundamentally a very good warning system in place – MetService have done a terrific job integrating closer with the City Council and the Emergency Management office and ourselves. Now, when big things happen, we’re getting emails, phone calls. We’re impressed by the turnaround. And I think that’s the sort of thing that needs to radiate out right across the country. So in a sense, we’re the poster child, yes, but the work we’ve done has been of benefit to communities around New Zealand.”

The importance of such a warning system cannot be overstated for places like Ōwhiro Bay, says Doyle. “As coastal people, our instinct isn’t to throw our hands in the air and run screaming for the hills. We know that those events, even though they’re coming at us at a faster tempo – instead of being once in a hundred years it might be every year or two, if the climate science is right which I’m sure it is – then out of a whole year we might have one really bad day. As long as we’ve got good warnings in place to deal with that, there’s a lot we can put in place to keep our communities safe.”

Doyle isn’t pretending that everything can otherwise continue as normal – that, in the euphemism of the moment, “managed retreat” is avoidable for all. But he’s keen to disabuse the impression in “some parts of the popular mind” that it means anything like “emptying out the south coastline”. “That ain’t going to happen any time soon and it doesn’t need to happen any time soon,” he says.

For the most part, it was a question of “assessing where your weak points are. And we know where ours are. Out of our whole bay we’ve just got a small area that’s really vulnerable. And you’ve got to harden that up. If you do the work on the private property, and on the road assets and sea walls and things like that, then you can keep communities in the bays along the south coast and you can have Wellingtonians from across the city enjoying the south coast and red rocks and all of this, for a very long time to come.”

There will, he accepts, be some places that are beyond hardening and some dwellings may be done for. For those affected, the enemy is bureaucratic procrastination, he says. “Yes, there will be some places where there will have to be retreat. But the danger is [a situation] where Wellington City Council and Greater Wellington and these outfits spend an enormous amount of time, years, thinking about thinking, planning about planning, but not quite getting on to it, right? We don’t want them to come to us in a few years and go: Oh my God we’ve had a big think about it and now people have to move or whatever. We want people taking sensible, measured action now to establish what are the pragmatic, practical things that can be done at reasonable cost to maintain our coastal culture, which is such a huge part of Wellington and New Zealand’s life. As a country we’ve invested billions upon billions in coastal infrastructure, and you don’t want to run away like headless chickens because we’ve got a bit of a challenge in front of us.”

At a moment when people are paying attention to climate change and adaptation – demand led to the SeaRise maps crashing much of yesterday – what might Doyle holler to local and central government, and the country as a whole, from the south coast of the North Island?

“What we’ve seen in our Three Waters failures here in Wellington and across the country is that when you ignore the environment, when you ignore the voices of the community, what you end up with is a disaster,” he says. “So when it comes to adaptation, mitigation, or what’s coming our way in terms of sea level change, do not go away into the bunkers of the local public service and think up plans. You’ve got to engage with the community now, and have processes that ensure communities that are affected are actually part of the decision making process.”

One more thing: “It’s all connected. It’s high time that as a culture we take climate change really seriously. That we reduce our emissions really seriously. I think it’s a disgrace that the government’s thinking about pulling out the chequebook and buying [carbon] credits overseas. As a society we should be leaders in reducing emissions. In Ōwhiro we like to be fact-based, science-based and action-based, and we want our leaders to operate in a similar way.”