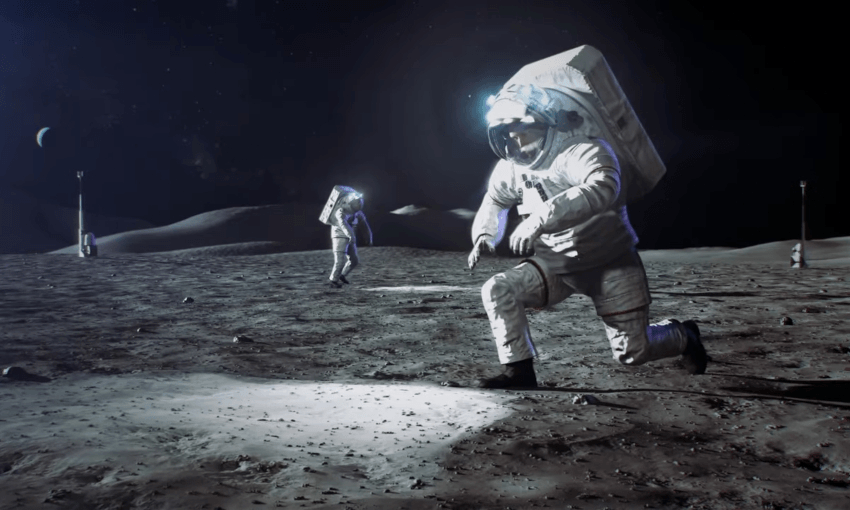 The American-led Artemis Accords, signed this week by New Zealand, make a lot of the right noises. But they could lead to a more privatised, US-dominated future of space exploitation – and lunar mining. That’s a problem, writes Ollie Neas.

After nearly 50 years, humans are returning to the moon.

The US aims to put astronauts back on lunar soil by 2024-ish, while China and Russia are planning their own lunar research station. Even New Zealand based Rocket Lab has a piece of the action, with a contract to send a small satellite into lunar orbit this year for Nasa (albeit from its US launch site).

But what will we do once we’re there? Some see the moon’s resources as a handy source of provisions for missions deeper into the solar system. Others – such as Rocket Lab customer Moon Express – are eyeing up a new frontier for private profit. Moon mining is now on the agenda.

Through the Artemis Accords, which our space agency signed on Monday, New Zealand has joined the conversation about how the moon and other space resources are to be used and for whose benefit.

Many of the accords’ principles reflect agreed international standards on topics such as the release of scientific data and the registration of space objects. But other parts are controversial, and could pave the way for a privatised, US-dominated future of space exploitation.

The legal status of space resources is contested. The world’s main space agreement, the 1967 Outer Space Treaty, prohibits the “national appropriation” of the moon and other celestial bodies by any means. Some academics argue this rules out moon mining for private profit. Others say it only precludes claims to land, not its resources.

This uncertainty aside, in 2015 the US Congress passed a law allowing American companies to own and sell natural resources mined from space. In April last year, the Trump Administration declared that the US doesn’t view space as a “global commons”, denouncing the 1979 Moon Agreement, which sought to protect the moon’s resources as “the common heritage” of mankind (although few states have signed up to it).

Announced shortly after Trump’s declaration, the Artemis Accords – which are advanced directly with “like-minded” nations, rather than through the UN – seek to shape international law in line with this worldview, asserting that the extraction of space resources is not “inherently” national appropriation under the Outer Space Treaty.

The accords also allow countries to declare “safety zones” around moon bases to prevent interference from other countries or companies operating nearby. Although pitched as a necessary safety measure, there are concerns these zones could be used to assert exclusive rights over areas of the moon.

The head of Russia’s space agency has likened the accords to the invasion of Iraq, warning that the creation of a “coalition of the willing” for lunar exploration “will only result in a new Afghanistan or Iraq”.

The briefings show New Zealand was one of eight countries with whom the US originally shared a draft of the accords in July last year. But unlike the other countries, New Zealand declined to sign the accords in October. One reason was the inclusion in the accords of “principles on more contentious issues where there is a lack of international consensus” – in particular on the use of space resources and safety zones.

Despite those concerns, the government has now signed up, noting the potential benefits of space resource extraction while acknowledging the need for further work on the issue.

Of the accords, she said: “While existing international law provides high level rules around the utilisation of resources, we see a need for additional rules or standards to ensure the conservation and long-term sustainability of these resources. The Artemis Accords are an important first step in that regard.”

The wording of the accords is vague – and it may be that a winner-takes-all approach to space development can be avoided. But the corporate lobbying and great power competition that lie behind the text show just how challenging that task will be.

New Zealand is in the rare position to participate meaningfully in this debate, as one of only a few states with space launch capability. We should project that voice through inclusive, multilateral forums, such as the UN’s Committee on the Peaceful Uses of Outer Space, rather than through bilateral efforts that advance US interests over others. As then US Vice President Mike Pence declared in 2019, “the rules and values of space are written by those who have the courage to get there first.”

At home, there is a need for a broader debate about New Zealand’s role in space. The government has been quietly developing a national space strategy since at least 2017, but there has been little public input beyond consultation with the obvious industry stakeholders.

As Mahuta’s comments on the Artemis Accords show, the government is making the right noises on space issues – peace, cooperation, kaitiakitanga. But as we have seen with the controversy over Rocket Lab’s launches for the US military, the challenge is how to live up to those values.

It is one thing to talk about conservation. It’s quite another to insist that everyone on this planet – including those nations who will never have a space programme – is as much an inheritor of the moon and cosmos as the likes of Elon Musk and Jeffrey Bezos.

Prominent astro-physicists have recently called on nations to speak up against US attempts to fashion itself as the “de facto gatekeeper” to the universe. Will we do so?