Rocket Lab launches of satellites honing US military targeting capabilities have been criticised by the Peace Foundation, which is calling on the PM to step in.

Peace groups are calling on the prime minister, Jacinda Ardern, to stop the launch of a controversial US military satellite that is scheduled for lift-off from Mahia this month, saying it may contravene nuclear-free legislation.

Rocket Lab’s next mission is due to carry a satellite for the US Army’s Space and Missile Defence Command, called the Gunsmoke-J. The satellite is designed to improve US military targeting capabilities by improving how data is provided to “warfighters”.

The satellite has previously been condemned by the Green Party, while a security expert has suggested it puts New Zealand into “the kill chain” and makes New Zealand a military target.

Non-profit group The Peace Foundation has now added to those concerns: the launch may breach New Zealand’s nuclear-free laws.

In an open letter to the prime minister, the Peace Foundation’s International Affairs and Disarmament Committee says Rocket Lab’s launches for US military agencies risk drawing New Zealand “into supporting the weaponisation of space and the related nuclear arms race”.

Satellites contributing to nuclear weapons programmes cannot be approved under New Zealand law. But the Peace Foundation says New Zealand may lack the technical expertise and information necessary to properly assess whether a satellite is making such a contribution.

As a result, the Peace Foundation says approvals of US military satellites should be suspended, and approval of the Gunsmoke-J satellite revoked, until greater oversight of space launches is implemented.

The letter has been endorsed by 17 civic, peace and religious groups, as well as members of the public. 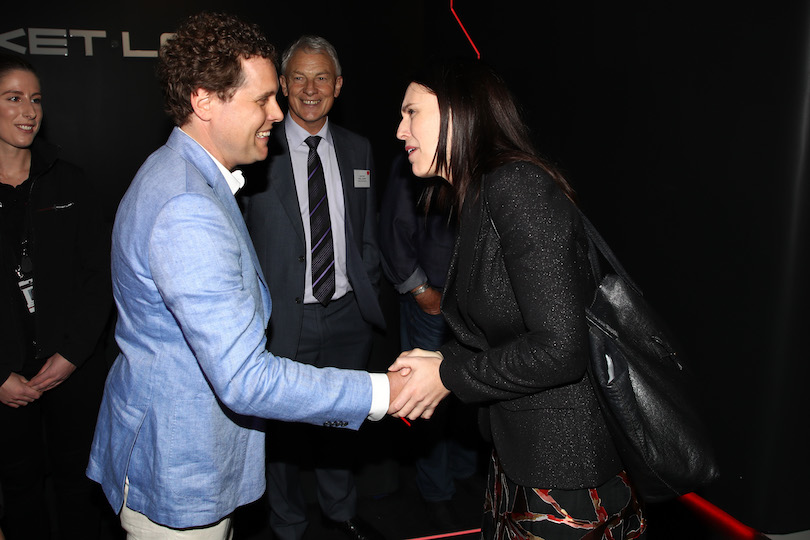 There is no suggestion that the Gunsmoke-J or any other satellite launched from New Zealand is itself a nuclear device.

But under the Nuclear Free Zone, Disarmament and Arms Control Act 1987, it is unlawful to “aid” or “abet” any person to “have control over any nuclear explosive device”.

Space-sensing capability is part of “our nuclear deterrent”, according to a 2016 speech from a US Strategic Command commander.

As The Spinoff reported last month, the Gunsmoke-J is designed to improve US military targeting capabilities by testing how “tactically actionable targeting data” is provided to “warfighters”, according to US Department of Defense documents.

The US Army says the technology being demonstrated could, among other purposes, assist in “long-range precision fires” – a type of missile used to provide “precision surface-to-surface deep-strike capability”.

The minister responsible for approving the satellite, Stuart Nash, told parliament last month that he was “unaware” of its “specific military capabilities”.

Otago University conflict resolution and disarmament expert Kevin Clements said it is “astonishing” that Nash was unaware of the Gunsmoke-J’s specific military capabilities.

“It is even worse that he is willing to rely on the US Army alone to provide the information required by him and New Zealand’s space agency in relation to the approval process,” Clements said in a statement.

“Rocket Lab’s launch programme is increasingly opaque. The precise content of each payload seems intentionally ambiguous and approvals do not seem to take New Zealand’s anti-nuclear legislation into account.” 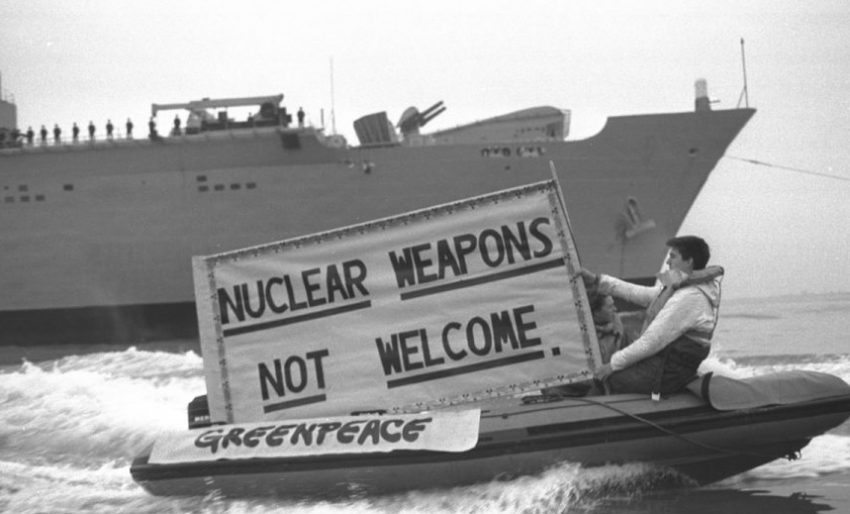 The US policy of neither confirming nor denying whether its ships were nuclear armed led to a ban on US warships visiting New Zealand ports (Photo: Greenpeace)

The Peace Foundation says there is a “strong parallel” between the launch of US military satellites from New Zealand and the “neither confirm nor deny” issue of the 1980s.

The US policy of neither confirming nor denying whether its ships were nuclear armed led to a ban on US warships visiting New Zealand ports – the seminal moment in the anti-nuclear campaign.

As with that issue, the Peace Foundation says New Zealand cannot be confident that US military satellites launched from New Zealand are not contributing to nuclear weapons systems.

The Peace Foundation says assessing whether the Gunsmoke-J complies with the nuclear free law would require detailed technical knowledge of how the technology might be used in the future.

“To assess whether military payloads comply with the 1987 Act thus requires technical expertise in dual-capable systems and detailed knowledge of their current and potential end uses.”

Such information is “highly classified”, so it may be illegal under US law for the US government to share it with New Zealand, it added.

Space Agency head Peter Crabtree says satellites “cannot be approved which would contribute to a nuclear weapons programme – this is consistent with our domestic and international legal obligations, as well as our proud and firm history of being nuclear-free”.

All satellites launched from New Zealand must be approved by the economic development minister, who is currently Stuart Nash. Principles for the space regime agreed by Cabinet in 2019 rule out satellites that “contribute to nuclear weapons programmes or capabilities”.

Crabtree says New Zealand is provided with “full information to make a determination on any US payload’s consistency with New Zealand Law, national security and national interest”.

Information provided “encompasses full details of the payload’s technical capability which allows us to consider potential end-use. Where necessary we are also able to request and receive classified information related to applications.”

The Space Agency says it has “technical expertise in house”, and also draws on the expertise of the Ministry of Defence, New Zealand Defence Force and New Zealand’s intelligence agencies when needed.

In light of its concerns, the Peace Foundation says greater oversight is needed over New Zealand’s space regime.

It proposes assigning oversight of space launches to the prime minister, strengthening space regulations, and mandating oversight of space-launch activity to the Public Advisory Committee on Disarmament and Arms Control (PACDAC) – a body set up by the Nuclear Free Zone Act to advise the government on disarmament matters.

Minutes of PACDAC meetings obtained by The Spinoff under the Official Information Act show the committee has had ongoing concerns about the consistency of space activity with New Zealand’s nuclear free law. Space Agency officials have met with the committee to assure members of the legality of launches.

The Peace Foundation also calls for changes to the Technology Safeguards Agreement that New Zealand signed with the US to allow for the transfer of sensitive rocket technology. The treaty requires the US to provide “sufficient information” about its spacecraft to allow New Zealand to assess them, but also allows the US government to veto any space launch from New Zealand.

“There are some very big moral questions at stake here,” says Clements. “Is this current Labour government willing for New Zealand soil to be used by Rocket Lab in order to assist US government targeting in conventional and nuclear warfare?”

The Peace Foundation’s letter comes a week after Rocket Lab announced that it would list publicly on the Nasdaq stock exchange, with a valuation of $5.7 billion.

Although its main launch site and production facility is in New Zealand, Rocket Lab is US owned. Its investors include major US venture capital firms as well as aerospace and defence company Lockheed Martin, which produces nuclear weapons.

Rocket Lab also unveiled plans to launch a larger rocket called the Neutron, which will allow it to launch astronauts.

Since 2018, Rocket Lab has launched military or intelligence payloads on seven different missions for agencies ranging from US Special Operations Command to the National Reconnaissance Office, a major US spy agency.

Rocket Lab says around 30% of its business is for defence agencies.