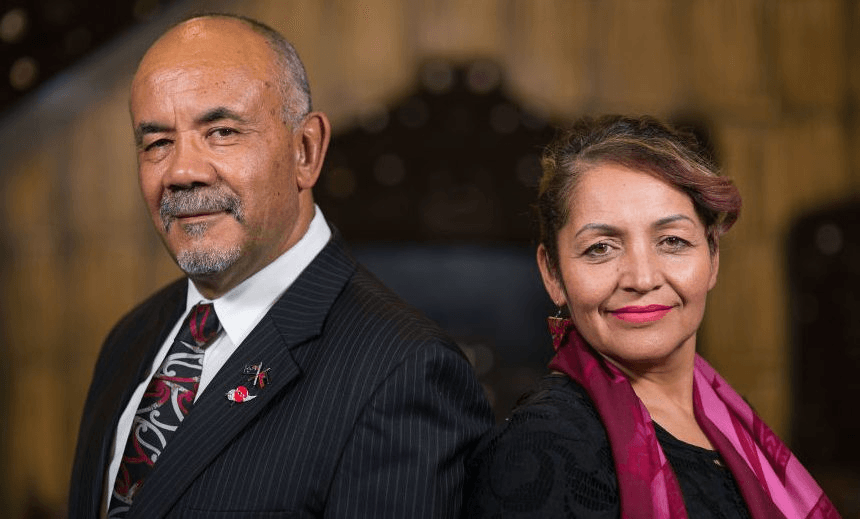 Please don’t tell Don Brash, but the Māori Party could decide the next government

The party led by Te Ururoa Flavell and Marama Fox is at once clinging by a thread and on the brink of the balance of power. Morgan Godfery examines the crucial battlegrounds in the Māori seats

Don Brash is waking each morning at 3am, cold sweat crawling across his face, and reaching for his iPhone. “Search: Colmar Brunton poll, Thursday August 31.” I’m sure it was all a nightmare, he whispers, wiping a piece of hair from his screen. His hands are clammy. “Labour, 43%.” That’s the Jacinda effect, he thinks to himself. “National, 41%.” Socialists, he mutters. He scrolls past the Greens on 5% and New Zealand First on 8%, pausing on “the Māori Party, 1%.” He refreshes the page. “The Māori Party, 1%.” He tugs at the covers, bringing them just beneath his eyes. “The Māori Party, 1%.”

On these numbers, the Māori Party could determine the next government, a nightmare for folk like Don Brash who condemn “race-based parties” like the Māori Party and oppose “race-based privileges” like the Māori seats in parliament. If Māori Party co-leader Te Ururoa Flavell retains his seat in Waiariki the party could form a government with Labour and the Greens or with National and New Zealand First. It’s a tantalising poll for Māori Party supporters who always understood their party’s role as moving both left and right, and it’s a provocative poll for the liberal left who would prefer to keep New Zealand First out of the next centre-left government.

But it all depends on Flavell, the former school principal who seems in danger of losing Waiariki, the bat-shaped electorate running from Waihi Beach to Cape Runaway, to former What Now host Tamati Coffey. Labour’s internal polling puts Flavell on 31% with Coffey closing in at 30%, an unimaginable result only 12 months ago. Commentators were guilty of assuming a newcomer like Coffey would struggle against a four-term incumbent (who also happens to be the minister for Māori development), but Coffey is proving more wily than many of us were expecting, exposing that Flavell’s expensive Māori Housing Network has only seen 11 homes built.

It’s a devastating headline – $35 million over four years and fewer than a dozen homes built – especially in Rotorua, home to both Flavell and Coffey, where hundreds of people are homeless. Of course, one headline is never going to win an election, but Labour’s Māori team are beginning to sense an upset with Willie Jackson and Kelvin Davis joining Coffey on the campaign trail in Murupara and other ruined towns in Waiariki. “Te Ururoa Flavell and Marama Fox need to stop wasting time trying to get ASB to boycott Mike Hosking and spend more time on trying to get those banks to invest in our local communities,” wrote Jackson, drawing a neat contrast between politicians’ elite concerns and voters’ everyday realities.

But still: incumbency counts for something in the Māori electorates. Āpirana Ngata held Eastern Māori, the predecessor electorate to Waiariki, over 11 terms. The Māori electorates tend to change hands after far-reaching reforms (think MMP) or traumatic events (think the Foreshore and Seabed Act) rather than election-by-election. And so what, if anything, will trigger a change in 2017? Mere dissatisfaction? It seems absurd to compare the “Jacinda Effect” to MMP or the Foreshore and Seabed Act, but who would bet against a Labour Party that recovered 20 points in the polls in a month?

That said, even if Flavell loses Waiariki, the Māori Party could return to determine the next government. The Māori Television Reid Research poll put the party’s Te Tai Hauāuru candidate and former Kiwis league captain Howie Tamati on 52%. The incumbent, Labour’s Adrian Rurawhe, is sitting on 39%. This seems overwhelming, but it’s worth remembering the same poll in 2014 put Rurawhe on 29%. He went on to win with 41%. From here it’s tempting to condemn “landlines” for rogue polling, but the poll is almost certainly statistically sound – instead the issue is it’s only one poll from a particular point in time.

Te Tai Hauāuru is enormous, stretching from the King Country in the north to Porirua in the south, and so “get out the vote” efforts matter. This is always going to favour Labour, even with Tamati’s name recognition, with teams in places like Porirua, Palmerston North and New Plymouth knocking on doors, knocking together campaign signs and driving voters to the polls. These are the kind of mundane things that win elections. Of course, Tamati will be doing his own modest get out the vote work, especially because the stakes are so high: Tamati is the Māori Party’s insurance candidate. The party must return through Waiariki or Te Tai Hauāuru.

Of course, optimists like Māori Party president Tuku Morgan might cite Hauraki-Waikato as a strong chance, but Labour’s Nanaia Mahuta enjoys an overwhelming majority as well as the moral high ground after Morgan accused her of “kupapa behaviour”, a grievous insult that will win Mahuta a number of votes. Tāmaki Makaurau also seems safe for Labour despite a strong challenge from former broadcaster – and candidate for Labour’s nomination in Ikaroa-Rāwhiti! – Shane Taurima. Labour’s Meka Whaitiri will retain her enormous majority against the Māori Party co-leader Marama Fox in Ikaroa-Rāwhiti while Labour’s Rino Tirikatene will hold Te Tai Tonga, even with former Green co-leader Metiria Turei campaigning for the party vote and electorate votes.

Yet perhaps the best demonstration of Labour’s resurgence in the Māori electorates comes, paradoxically, from their opponents, with Morgan and Mana Movement leader Hone Harawira uniting against Labour and calling on voters to be “uncompromisingly Māori” despite their own differences on just what uncompromisingly Māori has meant in the past. In a meeting in Whangarei, the centre of Te Tai Tokerau, Morgan told the crowd Labour “stole our mana” with its foreshore and seabed legislation and “sent fear and terror” into Tūhoe in the 2007 police raids in Ruatoki. There’s no disputing that, though will voters hold Labour’s Te Tai Tokerau MP Kelvin Davis accountable for it?

It seems unlikely, and it may unite the weirdest opponents of all: Māori voters who will, by and large, remain Labour, and Don Brash, the bloke who would hate to see the Māori Party deciding the next government.