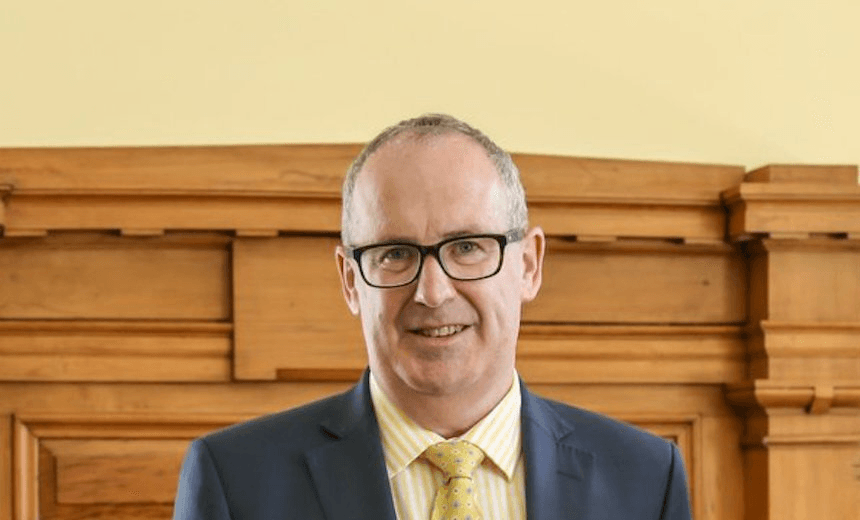 After Martin Matthews: Who audits the auditors?

Martin Matthews has resigned as auditor general on the back of a report into his actions – and inaction – during the three years that Joanne Harrison was committing fraud at the MOT. But if the report was so damning, why can’t the public read it, asks Peter Newport, in an opinion piece following his reporting on the saga.

Note: This story has been substantially edited following a complaint by the office of the Auditor General. The Spinoff accepts that the complaint had merit, and that our editorial processes failed during the publication of this piece. Below is a substantially edited version of the original story which we feel more accurately characterises the office and the questions arising from the Martin Matthews case. The Spinoff apologises for the errors and has made changes to its editorial processes as a result.

It often happens this way. A cover-up, or even a lack of transparency, makes the problem that someone wants to go away attract even more attention. That’s what parliament did yesterday by deciding not to publish Sir Maarten Wevers’ report into the suitability of Martin Matthews as auditor general.

The saga has thrown a spotlight on Audit New Zealand, which is part of the Office of the Auditor General, and failed to pick up the Ministry of Transport fraud. Audit NZ carries out an annual audit of all Government departments.

Standard audit practice is for senior staff to sign a declaration that they are not aware of any fraud taking place. But it was, and senior MOT staff – Matthews and the whistle blowers who tried to warn him – were aware of it.

In a written response issued to the Spinoff today, an OAG spokesperson said that it’s the role of the police and the serious fraud office to prosecute public service fraud cases. Here’s how they define the their audit function:

“The focus of the audit is to give an independent report on an entity’s financial and service performance reports and control systems. The auditor may uncover fraud during the audit but it won’t be a primary focus of the audit. The auditor will perform some work to establish that fraud has been considered by governors and management as an area of focus. An entity’s control systems are the best safeguard against fraud.”

Source: Office of the Auditor General

The Auditor General’s office even provided clear instructions on how to stop this type of fraud.

Martin Matthews, as CEO of the Ministry of Transport, seems to have ignored this explicit advice.

The OAG, at a different stage, surveyed government departments to see how many were carrying out anti-fraud checks:

Source: Office of the Auditor General

One successful prosecution we do know about was the former Auditor General Jeff Chapman himself, who was jailed in 1997 for defrauding both the OAG and ACC. Chapman was Martin Matthews’ boss and, as the Spinoff reported recently, Matthews is said to have used the Chapman story at the MOT, which was inferred as a discouragement to raise alarm over wrongdoing. Our source, the same person who produced an extensive timeline (PDF) that navigates the MOT documents on the case, also said Matthews had advised MOT staff not to volunteer any information to the Audit NZ staff during their audit 2015.

All of this might seem like old news until we start to look at exactly how Martin Matthews was elevated from CEO at the Ministry of Transport to a seven-year term as our auditor general.

To be clear, the auditor general is one of New Zealand’s most senior public jobs. It is appointed by the governor general on the recommendation of parliament. This is the task of the Officers of Parliament Committee, which is chaired by the Speaker David Carter.

Martin Matthews was sworn in as the new Controller & Auditor-General this morning by The Speaker. Martin’s term begins in February 2017. pic.twitter.com/ZU2WxYAHLz

Carter gave an extraordinary interview yesterday to Newstalk ZB, one which raises more questions than it answers. In fact this interview seems quite alarming given what we now know about Matthews’ time at the MOT.

Carter told ZB’s Chris Lynch that Martin Matthews was “unfortunate enough to employ a highly manipulative criminal”. Documents released by the MOT show that Australian police had raised questions with the MOT about fraudster Joanne Harrison back in 2014. The documents clearly show that Matthews was told multiple times, by his own senior staff, about Harrison stealing money from the Ministry but he consistently decided not to do anything. The MOT documents also show Harrison was a crude and unsophisticated criminal.

Carter went on: “It has cost this man his job and I think that is enough.” He was then asked about the decision not to release the Wevers report into the appointment of Matthews to Auditor General. Carter responded that suppressing the Wevers reports was okay because the “matter was resolved” by Matthews resignation. When asked about the need for transparency Carter answered “It’s been transparent enough for me.”

This morning Carter came under additional pressure on RNZ’s Morning Report, appearing uncertain as to whether a deal had been done with Martin Matthews to suppress the Wevers report in return for Matthews’ resignation.

The speaker is the highest officer elected by Parliament and the third most important constitutionally after the governor general and the prime minister. The State Services Commission and the Ministry of Transport, admittedly after media pressure, both committed to a policy of transparency over Matthews and the Harrison fraud. So why does this transparency not extend to parliament?

Carter’s explanation to RNZ this morning that his committee is a confidential “employment” body does not make sense given the $27,000 Wevers report into a matter that is clearly of public concern.

The MOT documents show a clear paper trail with Matthews turning a blind eye to Harrison’s blatant fraud for three years and allowing Harrison herself to influence the early departure of the whistle blowers who warned Matthews of the fraud happening under his nose.

The State Services Commission inquiry released last month resulted in an apology to the whistle blowers and the payment of compensation. They were in the right but still suffered at the hands of Harrison.

Just before all of the this media-inspired transparency happened earlier this year, David Carter had declared that he had complete confidence in Martin Matthews and claimed this was all “trial by media”. What basis did Carter have for this complete confidence when Labour’s Sue Moroney had forced the whistle blowers’ information out into the public arena some seven months earlier?

One of the most intriguing things about the past two weeks is that Martin Matthews apparently still did not see that he had done much wrong.

He’s reported to have prepared a robust rebuttal, with his own lawyers, of the Sir Maarten Wevers report. We know that Matthews was supplied by parliament with a substantial number of documents used in the preparation of the Wevers report. Those documents, at the very least, would have included all the disclosed MOT documents and probably a lot more that we don’t know about.

So why would an experienced senior civil servant, moving up to the top financial governance role in New Zealand, fight parliament and so much public evidence? And why did parliament confirm Matthews in the first place, so many months after Sue Moroney went public with the whistle-blowers evidence?

This is why we have to see the Wevers report. At its centre will be the key question of whether we are properly protected from fraud and financial mismanagement in the public service.

Perhaps more embarrassingly, it will provide some clues as to how parliament came to consistently overlook overwhelming evidence that Martin Matthews, with all his extensive anti-fraud training, had ignored – and prevented the investigation of – a long running case of blatant fraud involving his own general manager.

The report may tell us why parliament advised the governor general to give this man a seven year job as auditor general when the whistle blowers had already had their say in the media. In effect, parliament backed Matthews, in spite of the public evidence against him.

What was it that forced Matthews to change his mind and resign?

These questions will burn ever brighter until the Wevers report is released.

Note: This story has been substantially edited following a complaint by the office of the Auditor General. The Spinoff accepts that the complaint had merit, and that our editorial processes failed during the publication of this piece. Below is a substantially edited version of the original story which we feel more accurately characterises the office and the questions arising from the Martin Matthews case. The Spinoff apologises for the errors and has made changes to its editorial processes as a result.