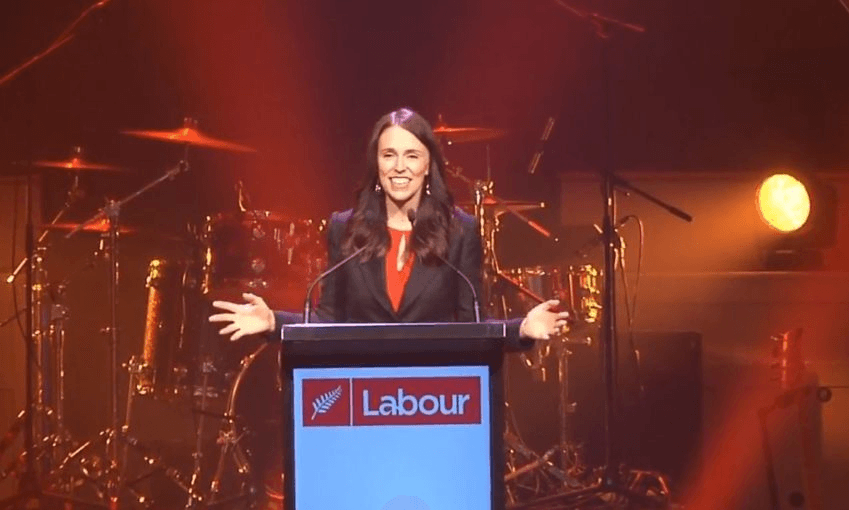 Never has the description “leader’s address” been truer. Before the party faithful at the Dunedin Town Hall this afternoon, Jacinda Ardern offered what might be called an epistolary speech, reading from a bunch of letters as a way to frame the whole thing. Letters which, she said, had a “profound impact” on her.

The first letter cited by the prime minister allowed a gentle dig at her National counterpart – but without even having to say his name.

“I still remember, as a brand new member of parliament, being given the opportunity to feature alongside a National Party MP in a weekly breakfast TV slot known as ‘The Young Guns’,” she said, prompting a we-know-who-you-mean murmur from a Sunday afternoon crowd that had earlier queued all the way down to the Octagon.

“One day I received an email from a member of the public politely advising me that she thought my hair clashed with the National MP, and perhaps I should consider dying it. I replied that perhaps she could make the same suggestion to the other MP. After all, his hair was shorter.”

The letter theme also offered a way into the obligatory conference-address Norman Kirk name-check. In his 1973 interview with David Frost, the former PM had been asked to describe his most memorable incident since taking office, said Ardern. He’d chosen “the thousands of letters that came in December after we’d made a nominal payment to social security beneficiaries”, and the stories they’d told about basic needs they’d not previously been able to afford.

From a stage awash in red, Ardern went on to talk about the hundreds of letters she receives from children, quoting a handful, including one from someone making a very good point about grey toasters being boring, and launching from there into an exhortation of the Families Package – the impact of which was illustrated with, yup, excerpts from a couple of letters.

Ardern praised the government’s ambitious housing programme, KiwiBuild. There was no letter to illustrate its success, however; presumably because the last time successful ballot winners were put on public show, it didn’t end terribly well for anyone. Rest assured, however, the other obligatory name-check, Michael Joseph Savage, was forthcoming.

And there was a letter from the aunty of a boy with special learning needs, by way of preface to the “little bit of an announcement” Ardern had teased before the speech. Ardern revealed her government partners had signed off a new scheme that would provide 600 “learning support coordinators” from the beginning of 2020, at a cost of $217 million over four years.

This was, Ardern said, a “game changer” for teachers, children and their families. Ask affected parents and this is one area in which, rightly executed, the “game changer” description is no hyperbole. The NZEI were quick to welcome it as “a positive start to the week of facilitation with the ministry over primary teacher and principal collective agreements”.

The announcement won a series of ovations from the crowd – that’s no surprise, conferences always deliver ovations. You could announce to conference your commitment to allowing New Zealanders to sing in the shower and you’d get an ovation. But still there was a palpable sense – even watching via the livestream – that this was different to the ovations for conference announcements across the last decade. I mean, of course it’s different: people actually expect it will happen.

Well, that and, as rising Labour star Kiri Allan put it, post-Jacinda “Labour got cool”.

The rebirth of Labour cool was there from the leadup, as Clarke Gayford noted the “positively infectious” mood of the conference, something new to plenty of delegates. They’d even discovered for the first time that party president Nigel Haworth was capable of smiling, he said. As if there were any doubt that the stardust still fills the air in a room like this, Gayford introduced his partner to the stage with just the one word: Jacinda.

So letter-heavy was Ardern’s speech, you’d think she’d finish not so much with a conclusion but with a post-script. And you’d be right.

“In finishing I will tell you what I would say if I was writing a letter to New Zealand,” she said. “I’d start by saying thank you. Thank you for supporting us. For giving us this incredible privilege of being in government. For allowing us to create a fairer, kinder New Zealand.

“And I would finish with a big giant PS, Let’s keep doing this.”

It’s quickly becoming a hackneyed bit of phrasing. At her last, rather less persuasive, rally style speech, in mid-September, Ardern ended with the words “we are going to keep doing this”. But you can hardly blame her for busting out the hits for the devoted on a hot Sunday afternoon in Dunedin. After so many conferences spent summoning up the energy to cheer for a party in the doldrums, this must have been a good time. And the mailbag won’t be that bountiful forever.