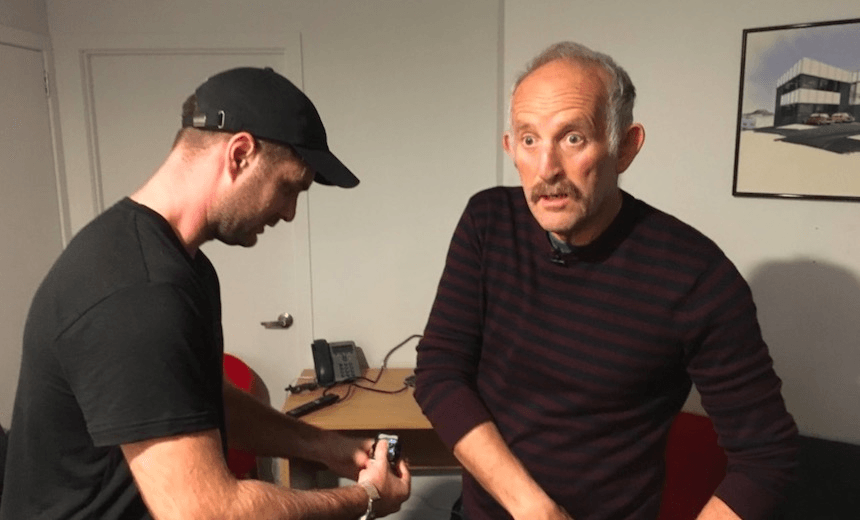 While TOP only managed 2.5% of the vote in the recent election, Gareth Morgan’s political ambitions are far from over. He’s just dropped $430,000 more into TOP while putting his think tank on long-term hiatus, writes Duncan Greive.

The Morgan Foundation, the charitable trust set up by economist Gareth Morgan and his partner Jo, is set to enter hiatus this November, after running for 10 years, a spokesperson confirmed to The Spinoff. The decision, of which staff were informed in October, will mean all current staff are made redundant – though some are currently on a leave of absence while seconded to Morgan’s The Opportunities Party (TOP).

The closure comes just weeks after Morgan poured another $430,000 into TOP, which has replaced the Foundation as the primary vehicle for Morgan’s aspirations to change society. The Spinoff spoke to a number of current and former Morgan Foundation staff, some of whom requested anonymity. They said that as soon as TOP was founded they realised the think tank was likely to be a casualty. “It didn’t come as any surprise,” said one. “We knew well ahead of the election,” said another.

The foundation was formally founded in July of 2007, in the aftermath of the windfall the Morgans received from the sale of their stake in TradeMe to Fairfax – a $75,000 investment that eventually realised $47m. When asked what he would do with the money, Morgan said, “let’s give it away”. The Morgan Foundation became the primary vehicle for that, and has received over $13m in funding through that time, all of it from the Morgans. It does not accept donations.

The Foundation’s work has been somewhat scattershot, befitting the energy and interests of its funder. The donations it has made have tended to be in the development space, often in the third world. The majority of its local energies are concerned with “fixing” New Zealand, via policy created through its researchers. The outputs ranged from books on climate change, or fishing, or the UBI (“gaps in the Foundation’s knowledge – which was basically his knowledge”) to campaigns, most famously “cats to go”.

Staff say they loved the work. “The traditional rules that most marketers are constrained by don’t apply when you’re working for someone like Gareth,” says Shannon Smith, digital marketing manager for the Foundation until he transitioned to TOP earlier this year. Another spoke of how much they enjoyed researching in a think tank: “a lot of academic institutions look like privilege”.

Geoff Simmons, deputy leader of TOP, was employee number one for the Foundation when it turned into a think tank in 2009. He says he spent the five years researching, before realising that “we’ve done plenty of research – we need to communicate it”.

That lead to a more public facing role: more blogging and op-ed writing, more contact with the media – work which would ultimately make it easier for him to slide across into the role of deputy leader of TOP.

The launch of the political party was something which Morgan’s fans had long pressed him to do. It was a near-death experience in the Lebanon last year which put it front of mind for Morgan. He called Simmons the next day and gave him a six week deadline to set up TOP, which was launched in early December of last year. Yet while it might seem a natural outflow of the research and open source policy of the think tank, present and former staff believe the formation of TOP made the Foundation’s work untenable. That getting cut-through for their work, already difficult, became much harder after the party’s launch.

“It had crossed the breach,” said one. “The work that we were doing was seen in a different light. We weren’t working together behind the scenes, but there were legitimate perception issues.” Another noted that “Gareth starting TOP made [the Foundation] less than it was before.”

Much of this came down to the fact that it was never able to create clear air between its own work and that of brand Gareth Morgan. Kiwibank recently quietly changed the name of Gareth Morgan Investments, the Kiwisaver provider they bought from Morgan, reflecting the inevitable conflation of the name with the man. Likewise the Morgan Foundation’s work was invariably most strongly associated with its founder, funder and frontman. “It was always clear that this was Gareth’s project,” said one. From 2009-2016 it absorbed a lot of his energy and time. Then there was a shiny new toy.

When TOP started it took both Morgan’s attention and key staff like Geoff Simmons and Nick Tansley. Simmons admits that TOP ended up destroying the think tank: “If we had got into parliament, Gareth would have continued the Foundation,” he says. Missing out meant the party required funds which could otherwise have gone to the think tank.

With hindsight The Morgan Foundation can look like an incubator for TOP – one which gathered the ideas and evidentiary backdrop for the policy, and provided training for Smith, Simmons and Morgan about communicating bold ideas to the public.

Now it’s history – on hiatus, with no research scheduled. The writing has been on the wall: over the past few years Morgan has steadily wound down contributions to the Foundation – after peaking at over $4.46m in 2012, they were just $417k for the past two years combined. By contrast TOP has received around $2.5m in donations from Morgan over the past year.

Despite staff characterising Morgan as being exhausted by the campaign (“it was dirtier and harder than he expected,” one said), he appears to have decided that his best shot at enacting the sweeping policy changes the Foundation advocated for is now in TOP. For some staff, who’ve been with Morgan at two, three or more entities (Infometrics, Gareth Morgan Investments, the Foundation and now TOP) it’s just the latest in his rollicking ride. For the rest, it’s redundancy and figuring out what’s next.

And Morgan? His phone goes unanswered. He’s in Cuba, according to his daughter Jessi, “figuring out how the real revolutionaries do it”.