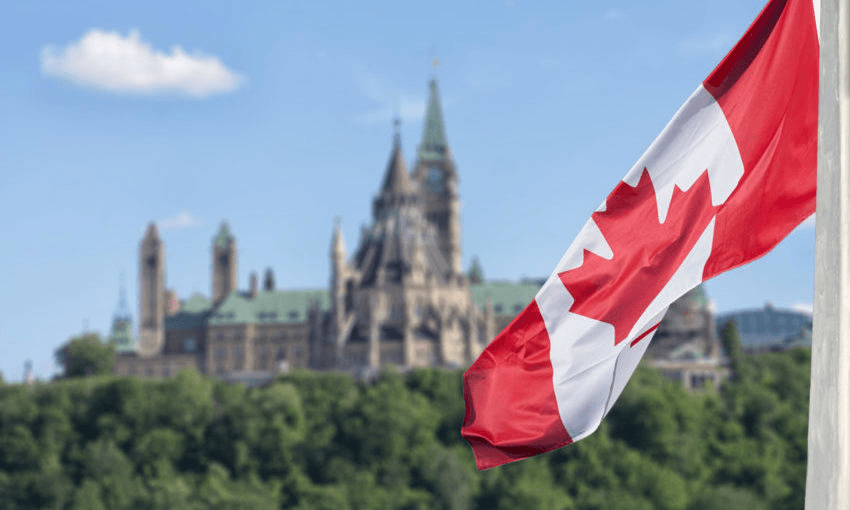 The two-step solution to fixing our donations mess

Max Rashbrooke makes the case for reforms based on the democratic principle that we should each have the same influence over politics. We could do worse than starting by looking at Canada, he argues.

The Money Talks series explores the rot in our donations system and ideas to fix it. It is made possible thanks to Spinoff Members. Join Members to support more of this work.

In the light of recent donations scandals involving the New Zealand First and National parties, just the latest in a long line of controversies, it is broadly agreed that we must curb the undue influence wealthy people are able to exert.

My own answer has two elements: a tough limit on the amount that can be donated privately, and a profoundly democratic new way to fund parties publicly.

All regimes for political donations try to balance two principles: free speech and democratic equality. Giving a party cash is a way to express your opinion.

But more important, in my view, is the idea that each of us should have – as much as possible – the same influence over politics. That is the ideal of democracy, and the last few centuries can be seen partly as a slow global climb towards that ideal. This climb encompasses the expansion of voting rights to all men and then all women, the extension of education to help citizens participate more fully in politics, and a panoply of official information acts and other mechanisms to help people hold politicians to account.

The next step in this steady ascent, it seems to me, is to address the imbalance inherent in the fact that wealthy people can donate far more to political parties, and thus gain more influence, than the rest of us can. Many countries already limit donations to an amount roughly within the reach of the average voter. In contrast to our system, which places literally no limits on donations, the Canadians allow their citizens to give just $1,625 a year (around $2,000 in our money) to any party. Only Canadian citizens – not companies, not trusts, and not foreigners – can give.

This, to me, strikes the right balance. Ordinary people’s ability to support the party of their choice is preserved, while curbs are placed on the excessive influence otherwise open to the wealthy. Of course the latter can still split a large donation into sub-$2,000 amounts and get friends and colleagues to anonymously donate each chunk separately. But with such a low limit in place, they would have to get ten people involved in their conspiracy just to give $20,000, in the process exposing themselves to a large risk of being ratted on. Scamming, in other words, is made more difficult.

In New Zealand, these curbs would create a large shortfall in parties’ funds – somewhere in the realm of $20 million over a three-year electoral cycle, according to my calculations. Parties might make good some of that shortfall by raising more small donations, but that is hardly a full solution.

The standard response, as in Canada, is to increase state (or public) funding. And despite the fuss that this suggestion often creates, we already have enormous state funding of political parties in New Zealand. Around $50 million every three years is paid to parties through their parliamentary appropriations. In theory, these funds are not used for “political” purposes, but in reality they are, because the boundary between political and non-political is almost impossible to police.

Political parties are, in any case, an essential part of democracy: they develop policies, put forward coherent platforms, and give voters predictability about outcomes. So it is appropriate that we all fund their activities.

One option would be to simply increase the parliamentary allocations. But this would be politically unpopular, and has definite downsides. It encourages party hierarchies not to turn outwards, towards voters and members, but inwards, to master the art of extracting money from a relatively opaque and technocratic process.

A better way to allocate that money would be through a democracy voucher, an idea gaining currency worldwide and now being trialled in America. In essence, the amount needed to fund political parties is divided up and turned into a voucher for each citizen to allocate to the party of their choice. This amount – potentially $20 per voter  – would be sent in the form of an electronic (or paper) voucher, perhaps in the midpoint between elections.

This approach has clear advantages. It would create major incentives for parties to propose policies with mass rather than elite appeal. It would help them reconnect with members and voters. It would allow smaller parties to compete on a more even footing with larger ones. And it would get around the political problem of people’s taxpayer dollars going to parties they despise. Various technical questions – such as the security of the vouchers, and the basis for allocating unspent ones – would have to be resolved. But they do not seem to me insurmountable.

This is, of course, a relatively new idea, and should perhaps be piloted before being fully rolled out. And if the whole idea seems too radical, there are alternatives, such as allocating funds based on party membership or a one-vote one-dollar system. Further ways to tilt funding towards new parties should also be explored.

My two-part proposal does not resolve every detail of the donations issue; there are other ideas I would happily support if my own achieved no traction, and it is probably true that we need a complete overhaul of the laws governing undue influence in politics, including lobbying and election spending. Whatever the approach, though, something simply has to be done to clear up this mess.