To this day, the phrase ‘NZ Power’ reminds Clint Smith of his involvement in an embarrassing political gaffe. But he still thinks the idea has merit – even more so after this week’s blackouts.

“Hey Clint”, Gareth Hughes asked me as the camera rolled, “are we pleased?”

The year was 2013 and we were standing in his office, as he was being interviewed by Tova O’Brien about whether the newly announced Labour-Green “NZ Power” policy was intended to damage National’s asset sales plans, and if we were pleased about that (in fairness to Gareth, he was thrown into the interview as the lead spokesperson, Russel Norman, was away).

Being asked a question while the cameras rolled was a new one in my political advisor experience. Pitching my voice low and quiet – but, it turned out, still clearly audible on the piece Newshub ran that night – I replied “That’s not why we did the policy.”

I’ve never lived it down. The moment went viral, inspired the #heyClint hashtag on Twitter, and went on to be named one of the top political gaffes of the year. 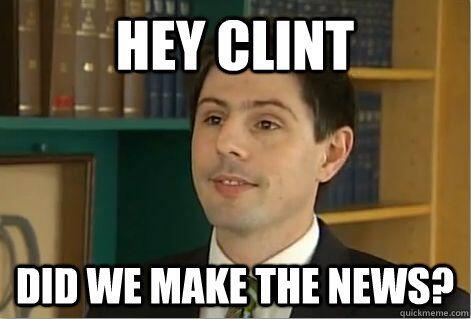 If you were on NZ twitter in 2013, you probably remember this meme

But I digress. Why, eight years ago, did Labour and the Greens announce a plan to radically reform the electricity market put in place by National in the so-called Bradford reforms of the late 1990s? And what’s it got to do with the blackouts we experienced on Monday?

Part of the answer is in the way that market failed during the cold snap this week. Part is in the way the electricity gentailers make their money by charging gas peaker plant prices for the essentially free water running through their hydrodams.

Briefly, most of our electricity comes from hydrodams and is very cheap to make. The cost of the dams themselves was borne by the taxpayer decades ago. Now, it’s just a matter of maintaining them and the equipment, and running the water through the turbines as needed. But the owners of the dams, the gentailers, get to sell that electricity for whatever the spot price is in the market at present. That’s usually set by the most expensive form of electricity in our system, which usually includes gas.

The market works with gentailers, bidding in how much electricity they will supply and at what cost. Transpower, the system operator, tells the gentailers to dispatch their power starting with the lowest cost bids up to the point where enough supply is bought to meet demand. Crucially, all suppliers are paid the spot price set by the most expensive electricity that is needed regardless of their bid price. If some gas is needed to reach that point, the generators using hydro (often the same companies) make a mint.

Rentier profits (gained simply for owning a resource) aren’t good for an economy and the fact these rentier profits hinge on the continued use of gas to hold the market up at a high floor price isn’t good for the environment.

Nor is it good for grid stability. The incentive for gentailers is to build the cheapest new generation possible (which is usually wind, sometimes hydro, geothermal or solar) so they can extract the greatest super profits. But they are also incentivised not to build so much new generation that gas won’t be needed – if that happens, the spot price falls and those super profits evaporate.

There’s little market incentive to build, although the prospect of surging demand from the electrification of transport and industrial heat is starting to see more generation built. In fact, the incentive is to err on the side of building less rather than more, and force the system to rely on those expensive gas power plants more often.

As demand increases (and the electrification of transport and industrial process heat will only increase it further) the system is being dragged closer and closer to the edge where there isn’t enough supply to meet demand, because that’s where the profit is to be had. When you’re close the edge, it only takes a small confluence of problems – a record cold night spiking demand, and a problem with dispatching enough generation due to a gentailer not bringing power plants online – for blackouts like we saw on Monday.

NZ Power was an attempt to address this by changing the spot price market dynamic. The idea was a “monopsony” – a sole buyer that would buy all electricity from the generators, split from the retailers. NZ Power would pay for electricity on a “cost plus” basis, where each generation option gets paid its actual costs of production plus a fair profit. We would still use the cheapest electricity first, but it wouldn’t be paid the same as the most expensive power.

No rentier profits for hydro, lower prices overall, and no incentive to keep the gas plants in the market.

NZ Power could prefer renewable sources over fossil fuels by giving them a higher profit margin than coal and gas, and setting an end date for when it would stop buying fossil fuel power. The profit margin would encourage new generation to be built, without the incentive to keep the market at the edge of shortage. NZ Power would be able to increase that profit margin for new generation if necessary to get new capacity built.

That was the theory, at least, but the public was not willing to trust the opposition with such a dramatic reform back in 2014.

Years after being unceremoniously dropped as a policy following the 2014 election, does it turn out that NZ Power was the solution all along?

But it’s clear that the Bradford reforms aren’t working.