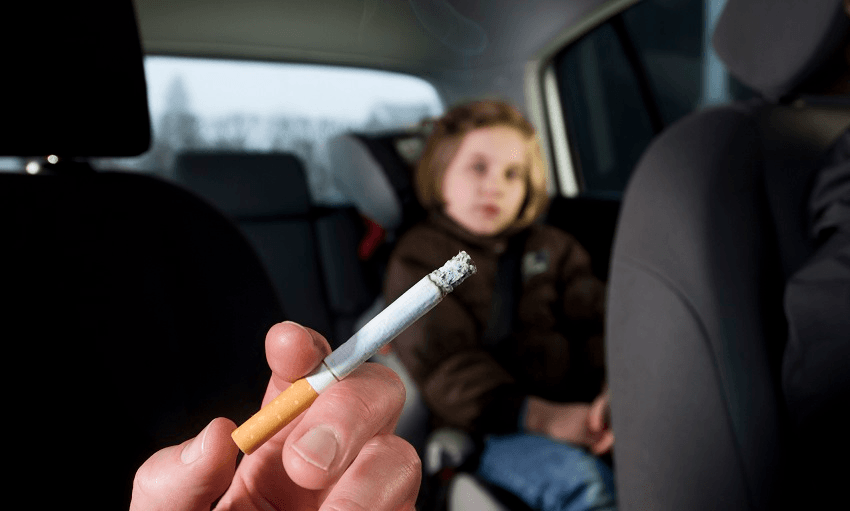 Why fining parents for smoking in cars isn’t the answer

By Kyro Selket
Guest writer
Made possible by

The government recently announced that it would ban smoking in cars when children under 18 are present, making the act a fineable offence. But social scientist Dr Kyro Selket argues the decision isn’t all it’s cracked up to be.

On Sunday, I stopped at my local Franklin takeaway for one of their exceptional butter chicken pies. As I sat satisfying my growing addiction, a number of cars pulled up and within seconds, passengers – mostly women – jumped out and lit up. They’d have a few quick puffs, pinch off the hot tip of their rollie, saving the rest until later, and head into the store.

That morning I’d heard the associate minister of health Jenny Salesa say she was going to ban smoking in cars when anyone under the age of 18 was present. This was apparently at the behest of The AM Show’s Duncan Garner and a small group of Pākehā academics who claimed the whole country was behind them.

I decided to wait to see how many people were committing what was going to be made a fineable offence. Over a period of an hour not a single woman smoked in her car with children present. I began to wonder if this was just another cooked up middle-class attack on the poor who have disproportionately high smoking rates.

The evidence being used to support changing the law is apparently a 2014 Action on Smoking and Health survey in which one-fifth of teenagers aged 14 to 15 said someone had smoked in their presence when they were travelling in a car or van in the previous seven days. In that same survey, 17% of Māori girls said they were already regular smokers. High school students are hardly representative of the “newborn baby” Garner claims is being abused by “stubborn” parents who just won’t give up.

Whipping up hysteria about smoking in cars might be good for Garner’s profile but it’s classic Fake News. He’s harking back to a time when everyone smoked in their cars because none of us knew any better. Those days are long gone. Three decades of stigmatising anti-smoking campaigns and shaming people for smoking in their cars with children present have worked and the majority of smokers who once smoked in cars no longer do.

If you do see a parent smoking in a car with their kids, you’re more likely to be looking at a parent that needs help with a number of social and economic stressors, not just smoking. Or they belong to communities that haven’t been reached by the predominantly Pākehā urban middle-class campaign messages. The disproportionately high smoking rates among Māori and Pacific Island peoples, who will be hardest hit by punitive smoker-bashing laws, are a testament to that.

Māori men are still twice as likely to smoke as non-Māori men, and Māori women are 3.5 times more likely to smoke than non-Māori women. About a quarter of Pacific Island people smoke and they’ve experienced no significant drop in their smoking rates over the last decade. It’s not insignificant that the first law to directly fine the smoker is implemented long after Pākehā have achieved some of the lowest smoking rates in the world at 13.5%.

On this topic, last year Prime Minister Jacinda Ardern said the best approach was to support families to stop smoking together. Amending the Smoke-Free Environments Act to clarify the government’s support for a harm reduction approach is the way to go. Running a campaign to encourage current smokers to switch to risk-reduced products would be excellent. Using a strength-based approach to support young Māori mothers to address their triggers to smoke is backed by the Ministry of Health’s work.

It seems Ardern’s promise of an “empathic government” is getting kicked down the road, or perhaps Salesa didn’t get the memo? Instead of fining people for being addicted to smoking, an empathic approach would be to use the relatively rare sight of a parent smoking in a car with a child as an opportunity to ensure that such whānau are accessing the appropriate health and social services. On that note, it’s time privileged Pākehā academics backed off from relentlessly lobbying for their top-down authoritarian strategies to be funded over and above Māori and Pasifika solutions.

Dr Kyro Selket is a social scientist at the Centre of Research Excellence: Indigenous Sovereignty and Smoking