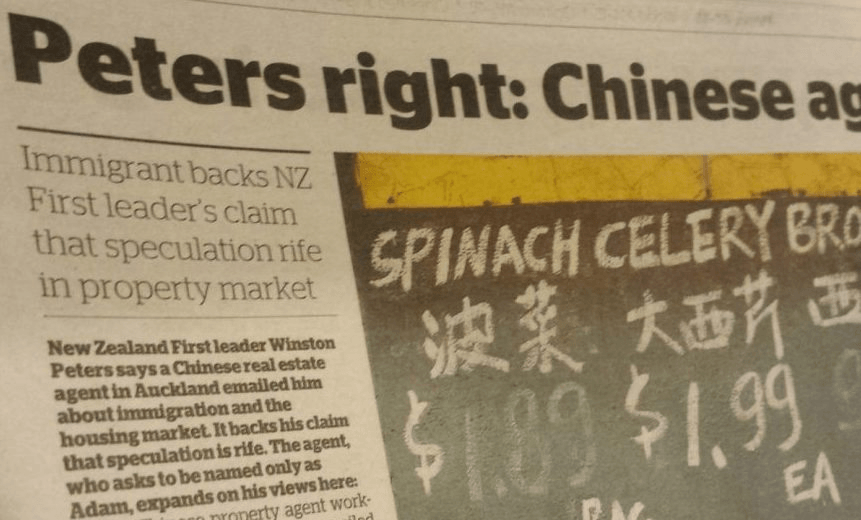 By Keith Ng
Guest writer
Made possible by

Immigrants are like teenagers. We spend a lot of time fitting in, and being hyper-aware of whether we fit it. When teenagers say “eeuuugghhh muuuumm”, they’re actually (kinda) articulating the idea that mum is unwittingly transgressing the social norms, and that they have by association also become a transgressor, an outsider, an Uncool.

And sometimes, fitting in is about excluding others. I don’t mean to say that this is all there is to Adam, or that he is as cruel as the term “teenagers” implies (sorry teenagers). There’s a lot going on in his piece in the NZ Herald today. In fact, that’s the real problem.

Adam is described as a Chinese real estate agent and immigrant who contacted Winston Peters recently to support the NZ First leader’s contention about speculation in the property market. The writer, “who asks to be named only as Adam”, laments that the “unique blend” of Auckland has changed since his arrival in 2001. “Instead of seeing a balanced ethnic mix, Auckland started to acquire an unwholesomely Chinese flavour.”

He says that Tokyo professionals who visited New Zealand told him “going to Auckland is like going to China”. Since I assume they didn’t come over to hang out in Howick, they’re probably talking about all the Chinese people in the CBD. But here’s the thing: many – if not most – of those Chinese faces are international students, not immigrants.

When he talks about Mandarin-screaming foreign speculators with bags full of money, those are – by definition – not immigrants either. But I suspect that he’s really talking about resident investors, who happen to be Mandarin-screaming and carrying their money around in bags.

The only immigrants he points to are the “low quality” ones who open up shitty little stores with cheap Chinese signs, but surely they’re not the ones with bags full of money, right?

Foreign investors, international students and immigrants are all separate groups, separate issues, governed by separate policies. Lumping them together isn’t about policy, it’s about class.

The speculators are too rich, buying up all the things, throwing bags of cash everywhere; the shop-owners are too poor, too uneducated, not speaking English, not having well-designed signs or enough employees in their shops; the students are too poor by virtue of working in one of those shops, or too rich as a child of the nouveau riche.

Not like all those good Chinese who are doctors, lawyers or real estate agents.

I think most migrants know the feeling: that cringe when someone speaks Mandarin too loudly in a cafe, or when – I kid you not – old Chinese guys walk in that very specific Mainland Chinese way with their hands behind their back. I swear it’s the same neurons which fire when the other kids see your mum pick you up from school and her uncoolness is now your uncoolness.

We feel that cringe because we feel that act of not-fitting-in will reflect on us. That it will negate our efforts to fit in, that it will threaten our own status in society.

Sure, some of these people Adam cites don’t fit in. We are upset by Chinese property speculators because they seem shameless in exploiting our insane property market. As opposed to Kiwi speculators, who do the same thing, but are totally Protestant about it afterwards.

I’m being facetious, but the difference in values are real and substantive. And it’s entirely reasonable for Adam or anyone else to assert that “No, that’s not what I believe.”

But what’s unreasonable is trying to tie all of these contradictory strands together. That these are low-quality unskilled migrants with bags full of cash who are only here to buy houses and open shitty corner stores; that they’ll change the face of NZ and make it Chinese, but are wholly uncommitted to NZ and will leave the first chance they get and leave us with nothing but affordable housing(!?!).

And if you want to see fewer Chinese people in the inner suburbs … well, you can just drive to friggin’ Ponsonby.