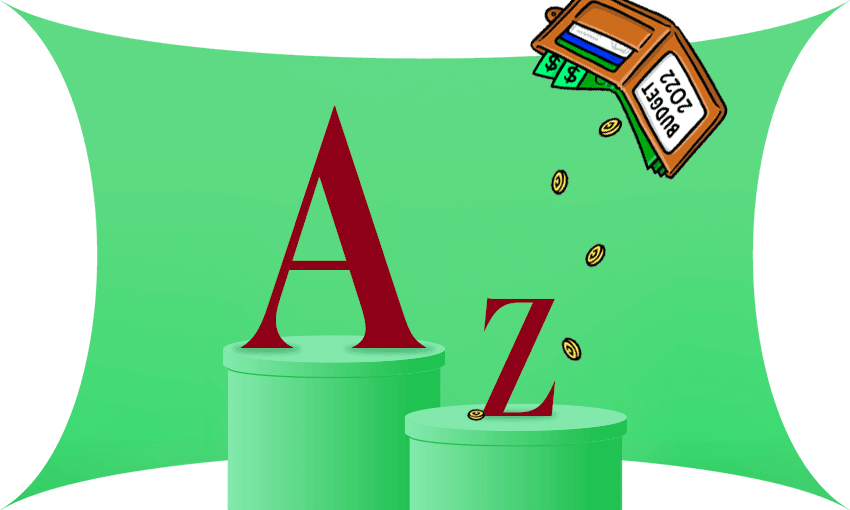 Budget 2022: It’s a big week for big spending – prime yourself for Thursday with 26 points of interest.

is for Aspiration, Ambition and All That

With Covid-19 no longer absorbing all the energy and a sweet six billion bonus bucks to spend, finance minister Grant Robertson will be looking to wheel out some of the familiar aspirational, ambitious cliches associated with budgets across the years. Another, more sobering A is Adaptation: expect to see a fair bit of money put into programmes for those whose homes face destruction by climate-induced rising seas.

The budget is inherently about balancing the books – or at least setting out how they’ll be balanced in the years ahead. But this year Robertson has been saying “balance” every second minute in the budget lead-up, and using it in another sense – to mean balancing priorities, such as the needs of today versus longer term challenges. Expect more of that on Thursday. See also: bracket creep, the phenomenon that pushes earners into higher tax brackets even when they’re not making any more money in real terms.

is for Cost of living

Robertson has sought to play down expectations of something major in the budget to address the cost of living crisis. So there’s bound to be something, and it will probably be more than the extension of half-price public transport, which might even be included as part of the Emissions Reduction Plan to be published today (Monday), meaning C is also for carrot, the one that goes with the stick.

is for Deficit and Debt

A perennial, this, but worth a reminder. The deficit measures how much more is going out of the state coffers than is coming in across a budget year. National debt is the sum owed, all up. Related: The opposite of deficit is surplus – when there’s more money coming in than going out in a budget year. After a series of Covid-induced deficits, they’re forecasting a return to surplus in 2024/25.

Climate is one of the two big stated priorities for Budget 2022 (health is the other), and will be part three of three in what we’ll call “emissions season”. Part one was the emissions budgets, which gained cross-party support last week, and laid out just how many emissions need to be cut across the next 15 years. Part two is the Emissions Reduction Plan, out today (Monday); that’s a huge deal, detailing just how those emissions will be cut (probably some won’t be cut; they’ll be purchased from abroad). On Thursday we’ll see how those costs are apportioned within the $3.7bn Climate Emergency Response Fund, which is in turn funded out of revenue from NZ’s emissions trading scheme? Got all that? Sorry.

The budget is the centrepiece of fiscal policy. “Fiscal” simply describes the raising of dosh by a government, mostly through taxation, and its spending.

In the lead-up to this budget Robertson announced new fiscal rules for budgets henceforth, including a “net debt ceiling” of 30% of GDP (gross domestic product). That increase is designed to “buffer” against economic shocks and allow spending for infrastructure to lift productivity and tackle climate change. “It makes sense for us to spread the costs of these investments over time,” said the finance minister.

Along with climate, health is the other bumper line item, to cover the innumerable costs of setting up Health NZ and the Māori Authority while disbanding and hoovering up the debt of the 20 DHBs. In the detail of the spending there are bound to be clues, too, about some of the structural and policy decisions that have been taken on the new setup.

Currently running at almost 7%, the highest for three decades. One of the trickiest challenges for Robertson to – that word again – balance is how to spend more dough without driving that inflation up further. Just nobody utter the word stagflation.

Budget day is a great day for acronyms like Befu (the economic and fiscal update published on budget day) and Obegal (Operating balance before gains and losses, as you know).

is for Key, Max

National leader Christopher Luxon and finance spokesperson Nicola Willis, whom no one until now has described as Luxollis, have made an impressive start in their roles, and for the first time take on the task of parsing, unpicking and upbraiding the budget. They have to strike a balance, too: combine ruthless criticism with a crisp, sober, statespeople-in-waiting tone.

The cousin of fiscal policy, this is all about money supply and interest rates, which is for the most part the purview of the NZ Reserve Bank.

is for Operating allowance

The operating allowance is new operating funding available for a budget, announced in advance based on government financial statements. This year it’s $6 billion – a lot. Again, in spending that, the government doesn’t want to spark further inflation.

is for Petroleum and Public transport

Petrol prices encapsulate the tension between immediate cost of living challenges and longterm, ruinous climate change. The likelihood is that the cut in fuel tax will be extended beyond June. It seems near certain the halving of public transport prices will be extended – and emphasised in the rhetoric. Because P is, after all, also for polling.

is for Qost of living

Following disruption to supply chains and heavy demand for words like Covid and Cost (of living), the letter Q has been asked to take some of the burden.

Will Robertson pull one out of the hat on Thursday? He’s sworn against “untargeted tax cuts”, but there could yet be a surprise, and it would surely be a qost-of-living-focused initiative. A forensically targeted tax cut even? Wrap the large part of dental health into the new health service? Make Ka Ora, Ka Ako, the healthy school lunches programme, universal? R is also for recession: “The chances of the New Zealand economy moving into recession are rising by the day,” said BNZ economist Stephen Toplis the other day.

Alongside “balance”, the words “security” and “secure” have been identified by The Spinoff’s team of semantic analysts as high-rotate language in the budget lead-up. Amid the global uncertainty, Robertson will tell us he has found the balance and will deliver economic security.

The “just transition” centres on the economic implications of cutting emissions – specifically, where does it leave people and communities whose jobs will disappear as we shift gear on the track to carbon zero? This is likely to be a chunky line item on Thursday.

Despite the upheavals of Covid, the unemployment rate is at a historic low of  3.2% – do not doubt that we will be reminded of that.

While some pore over the fine print, others scour around for a catchy shorthand to sum it all up. Most are too boring or deranged to stick in the memory – Michael Cullen’s “chewing gum budget” of 2005 being an obvious exception. In 2022, I’m betting someone on the opposition benches will call it the “Ram Raid Budget”.

After the well-bells and being-whistles of 2019, they’re all wellbeing budgets now, and every budget spend must, in theory at least, be run through the wellbeing scanner. If they really want to lean in this year, Grant Robertson must stand at the dispatch box on Thursday and intone that cost of living is important, yes, but what about the cost of loving crisis?

Xi is a Greek letter that was skipped as a Covid variant name. Xi Jinping is the president of China. Taken together in a desperate attempt to find something for “X”, they are arguments for a diversification of New Zealand’s export markets. Throw the geopolitical nerves prompted by the invasion of Ukraine into the mix and that project is increasingly urgent – there’s every chance Robertson will chuck some cash at exporter initiatives to spread that risk.

On Saturday morning Jacinda Ardern announced that the coronavirus had got her. That means she’ll have to use Zoom (or whatever the government-mandated equivalent is) to take part in any budget chat. Let’s hope she was prepared, and purchased Robertson’s tie nice and early.