Auckland Council is the latest subject of legal action by activists trying to force polluters and regulators to undertake more ambitious cuts to emissions. As Hannah Skelton and Andrew Geddis explain, this case will be far from the last.

Last week, the International Panel on Climate Change issued its latest, most urgent warning that we’re on track to burn up our planet even sooner than we thought. Four days earlier, a case was filed in the Auckland High Court to try to stop that from happening. It’s just the most recent example of the courts being asked to help bring about the sorts of changes needed to prevent a climate catastrophe.

What’s this latest action about?

Made up of lawyers you might stereotype as usually caring more about boardroom deals, the bike commuters who pass you every morning in rush hour traffic, and the youthful kind of climate activists who unintentionally make you regret that one time you littered, climate and transport advocacy groups across Aotearoa have joined forces to take Auckland Transport and the Auckland Council to court.

This coalition, All Aboard Aotearoa, are asking the High Court to judicially review Auckland’s newly released Regional Land Transport Plan. Their claim alleges that under that plan, Auckland Transport and Auckland Council have failed to address the climate crisis by proposing sufficient carbon emission reductions. Indeed, under their plan, transport emissions in Tāmaki Makaurau actually will increase by 6% over the next 10 years.

In other words, we’re standing in the burning building, we’ve called the fire brigade and given Aotearoa’s largest city the hose – but they’re going to try throwing gasoline on the blaze just one more time.

All Abroad Aotearoa are now asking the court to declare that Auckland Transport and the Auckland Council breached their legal obligations when preparing the plan, acting unlawfully by failing to produce outcomes that are truly in the public interest and act for the benefit of current and future communities. If the High Court agrees, they are asking it to order Auckland Transport and the Auckland Council to go back to the drawing board and create a new, emission-reducing plan. 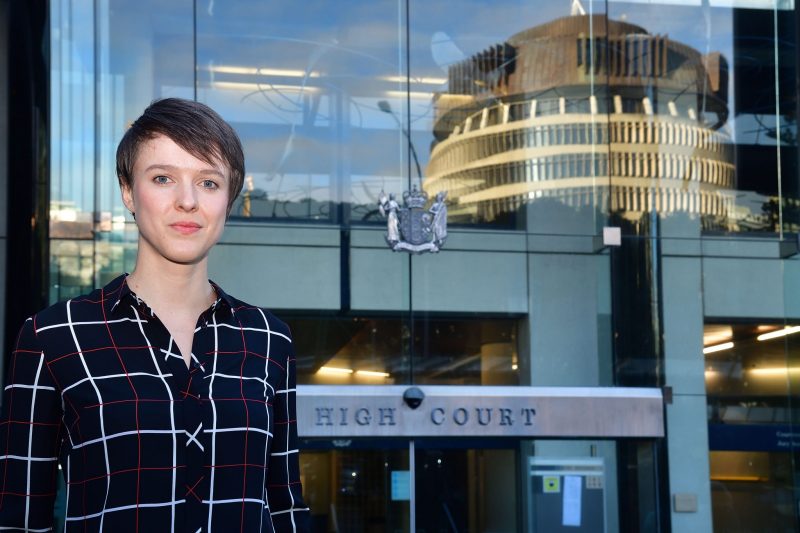 Have there been any similar court actions here?

While it might be particularly satisfying to fight the good fight against Auckland’s car addiction, this proceeding is not a standalone action. Indeed, All Abroad Aotearoa already had challenged the decision to build the now-abandoned $1.4 billion Mill Road highway project on the basis of the carbon emissions it would produce. And over recent years other advocacy groups and individuals across Aotearoa have been turning to the courts as a mechanism to achieve emission reduction targets.

Back in 2017, Waikato law student Sarah Thomson argued that the government had unlawfully set its climate targets and sought a judicial review of Aotearoa’s climate change pledges. While the court ultimately refused to issue any orders, it did find that the then National government had failed to undertake a satisfactory review of its 2050 emissions targets. In 2019, the Iwi Chairs Forum’s climate change spokesperson Mike Smith, of Ngāpuhi and Ngāti Kahu, commenced legal proceedings against seven of Aotearoa’s largest corporate emitters. His claim that their actions breach a novel “tort to the environment” that makes them legally responsible for the harm their emissions create, has been allowed to proceed to a full trial.

And just last month, Lawyers for Climate Action NZ filed a judicial review challenge to the Climate Change Commission’s advice on future carbon budgets, arguing it made a fundamental error in maths and physics that results in a significant underestimation of the emission reductions required by 2030. Those are just a sample of the at least 19 climate change-related cases to have come before the courts in this country.

What about the rest of the world?

As it happens, we’re not the only ones turning to the courts for … guidance, direction, a desperate plea for a fire brigade – whatever you want to call it.

Our neighbours across the ditch are, understandably, getting pretty fed up with the heat and have found recent success in an federal court case brought by a group of teenagers. The first-of-its-kind judgement ruled that the Australian government has a duty of care to protect young people from climate change when considering mine approvals. Only one day before that, a court in the Netherlands ordered everyone’s favourite oil giant, Shell, to cut their emissions by 45% by 2030. These are just two of the more recent and high profile climate-change related rulings to be handed down in the more than 1800 such cases that have been brought before the courts around the world.

Of course, these kind of rulings won’t necessarily map directly onto Aotearoa given our differing constitutional and doctrinal circumstances. Nevertheless, they set exciting legal precedents, providing our judges with an idea of the direction of overseas legal developments and hopefully affecting how they view similar issues here. Beyond that, decisions like these can inspire groups like All Aboard Aotearoa to see the potential in achieving change through the courts.

Why are people going to court so much?

Climate change related litigation is not just here to stay; like global temperatures, it is only going to increase. You only have to read the mixed analysis/warnings from large law firms such as Russell McVeagh and Minter Ellison Rudd Watts to see that. And all this ramped up litigation activity shouldn’t surprise us.

For one thing, climate change is the biggest and most threatening challenge we collectively face (Covid included). It is going to create huge shifts in how and where we live. That sort of massive change is going to ripple through all aspects of our society. Insofar as the law – and the courts that interpret (and sometimes make) that law – is rooted in our common social fabric, it is going to be as changed as everything else.

For another, the response to climate change – and in particular, efforts to limit it to “only” 1.5 degrees – requires both individual and collective action. Coordinating that action involves forms of regulation both macro and micro – everything from creating nationwide “carbon budgets” to ensure we will meet our international obligations, through to local council officials working out how many carparks a development can have in order to incentivise using other forms of transport. That regulation will be spelt out in various rules and standards spread across a wide range of statutes, legislative instruments, and planning documents. And where there is law, disputes over what it means and how it should be applied will follow as sure as atmospheric heating tracks greenhouse gas increases.

Are such cases just for show, or can they actually achieve anything?

Does this then mean we need the courts to be our Obi Wan Kenobi in the face of our current climate challenge? Well, no … but also, yes.

Law and the courts alone cannot stop climate change, because climate change is an all-of-society problem. No one social mechanism or institution is going to be able to address it adequately. But equally, law is the primary way in which we consciously set out collective rules to govern our social world. And the courts are the venue that can conclusively determine what the law is and what it requires of us, in a way that is binding even on those who may disagree.

In circumstances where we are running out of time to do what we need to, that sort of determinative resolution is going to be really important. So, get used to hearing about climate change in our courthouses.

Hannah Skelton is a final year student at Otago, completing her LLB and BA in History and Politics. She is the president of the Otago chapter of Law for Change. Andrew Geddis is a professor at the Otago Faculty of Law.