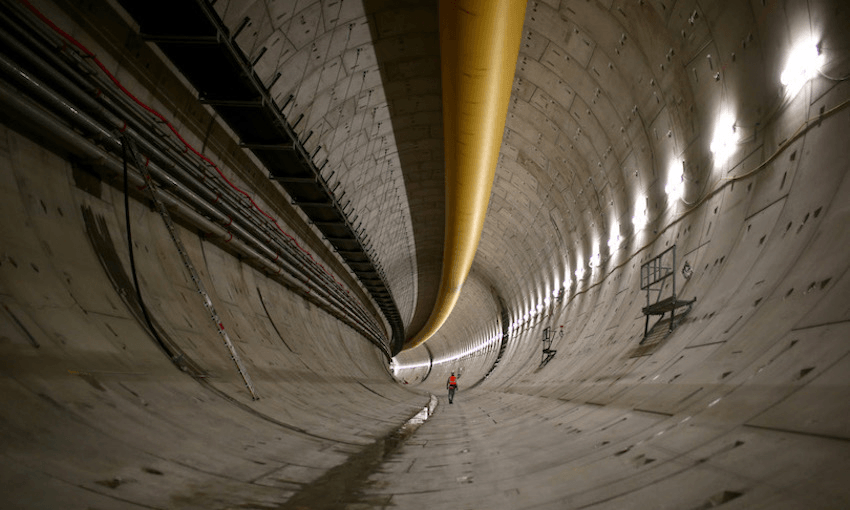 The ‘spend local’ mantra should apply to our biggest infrastructure projects too. Yet trade and investment agreements curb the government’s freedom to use procurement for a range of economic and social objectives, argues Jane Kelsey.

The government has a limited number of ways to kick-start the economy in the wake of a crisis like Covid-19. Government procurement contracts are one, by directing taxpayer and ratepayer spending on goods and services to support local businesses and employment.

Big spending on procurement figures prominently in this year’s budget. But will it go to New Zealand businesses, workers and communities, or will the benefits largely go offshore?

This exchange between Kim Hill and the finance minister, Grant Robertson, on RNZ’s Morning Report on Friday signals a major obstacle to giving preference to local businesses and their workforce, especially for Māori and Pacific communities.

Kim Hill: People are being asked to spend locally – buy NZ made. Will the infrastructure build, for example, favour local companies even if they are, on the face of it, less competitive than overseas companies?

Grant Robertson: Well, we’ve got rules under the WTO that we still need to meet, but this government has put a focus on New Zealand procurement already because we do believe we can do things about the way we structure contracts, the way that we do our tendering processes, to support smaller firms. For example, breaking large contracts up into smaller parts so that local firms have a better go at it. So that work has already been under way and it is really important that we engage New Zealand businesses in doing as much as we possibly can. I do think one of the legacies of Covid-19 is that New Zealand consumers are much more conscious of buying local and I think the government has to back that up as well.

Therein lies the problem. New Zealand’s trade and investment agreements require us to ensure that overseas firms can participate in large-scale tenders without any overt or disguised local preferences, and without artificially breaking up the contracts so each part falls below the value threshold at which these rules apply.

Historically, New Zealand governments have been cautious about adopting international trade rules that restrict their freedom to use government procurement for a range of economic and social objectives. The WTO’s Government Procurement Agreement dates from 1979 but New Zealand did not sign on until 2012. Another 48 WTO member countries have adopted the agreement, with a further 11 seeking to join. Firms from all those countries must be on a level playing field to bid for and win New Zealand government contracts at any stage of the procurement process. That means no discrimination in conditions on eligibility, contract specifications, the assessment criteria and decisions on tendering. Increasingly, that extends to contracts that can be performed from entirely outside the country.

The WTO rules apply to contracts for goods or services above a value threshold of between about $300,000 to $900,000 depending on the entities, and construction over $11 million, for 31 listed entities. These entities include 11 health boards, Housing NZ, the Tourism Board, Education NZ and KiwiRail. They also cover seven city or regional councils (Auckland, Wellington, Christchurch, Waikato, BOP, Wellington Regional Council, Canterbury Regional Council) for goods, services and construction contracts related to transport projects that are funded wholly or partly by NZTA. All of these entities are expected to play a role in the recovery plan.

In addition, the rules in the WTO and all New Zealand’s FTAs prohibit requirements that the main contractor uses local sub-contractors or local content. These are known as “offsets”, which the TPPA defines as “any conditions or undertakings that require use of domestic content, domestic suppliers… counter-trade or similar action to encourage local development”.

Our bilateral and regional treaties pose even bigger obstacles than the WTO. Government procurement restrictions exist in agreements with Australia, Singapore, Taiwan, South Korea and the 10 other parties to the Comprehensive and Progressive Agreement for Trans-Pacific Partnership (CPTPP), formerly the Trans-Pacific Partnership Agreement (TPPA). There is no procurement chapter in the original agreement with China, but the “upgrade” concluded in 2019 includes a limited chapter that will be revised if and when China accedes to the WTO’s agreement.

There are wide variations in the threshold value of contracts before these rules cut in, and central and local government and SOEs are often treated differently. Because different agreements have different restrictions, their apparent flexibilities risk being neutralised as the most restrictive in any of them becomes the default position for all procurement contracts.

Some exceptions may provide policy space. The Treaty of Waitangi exception is arguably the most promising, to enable real investment into Māori communities, businesses and workers across the country. The wording has several defects, but it does allow positive discrimination or preferential treatment to Māori – not just Māori businesses – in government procurement.

All New Zealand’s FTAs and the WTO annex have that exception, except the CER procurement protocol with Australia. There are some limitations. It cannot be applied inconsistently, for example by different local government entities in similar circumstances for similar goods or services, or used as a backdoor way to benefit local businesses by saying they aim to benefit Māori.

A number of agreements also have limited additional exceptions for measures “relating to goods or services of persons with disabilities, of philanthropic institutions or not-for-profit institutions, or of prison labour”.

What about emergencies such as Covid-19? There are some exceptions for protection of public health, which are subject to layers of conditions. That doesn’t help measures designed to assist the economic recovery.

Some countries are invoking essential security exceptions to justify changes in their foreign investment vetting laws. Again, these exceptions vary across the agreements, from the sweeping and self-judging version in the TPPA that might be stretched to cover an economic emergency to very limited circumstances in the WTO and other agreements that could not. Again, a non-discriminatory tender seems to require the lowest common denominator to apply.

In the short term, broad social objectives – local employment, support for small business, Pacific, regional and migrant communities – can be pursued through contracts below the value threshold, especially at the local level.

Payment of the living wage should be an acceptable contractual requirement and technical specifications for projects intended to benefit Māori, Pasifika, migrant and refugee communities could legitimately give them the best chance to secure the contract.

Splitting contracts into smaller parts is not permitted if the intention is to bring them below the threshold, which the government could be accused of doing. Nevertheless, many governments will be doing so at this time and expect each other to turn a blind eye.

Preferences for Māori, including as offsets in large contracts, would be protected by the Treaty exception, aside from CER obligations – but CER is not directly enforceable and Australia has an indigenous preference scheme itself that isn’t exempted from CER either.

These are stop-gap measures born of expediency. This recovery is going to require years of reinvestment and there will be other crises in the future. New Zealand’s convoluted web of free trade agreements prevents us from maximising the benefits from applying taxpayer and ratepayer funds to advance our post-Covid recovery, and in the longer term.

Covid-19 is the canary in the coal mine. Most countries are facing the same domestic imperatives and obstacles.

Directing larger contracts to domestic firms, with flow-on effects for jobs and regional recovery, would mean amending the free trade agreements. The lack of a Treaty exception in CER should and can be fixed. Current negotiations with the European Union and others need to step back and reconsider the implications of including government procurement in light of Covid-19.

The WTO itself needs to revisit the rules and exceptions for public procurement so governments don’t have to manipulate their contracts to fit the rules. Mutual agreement should be achievable, so long as New Zealand and other governments prioritise their common need to rebuild, rather than the purist approach that has driven procurement as purely a market access issue. In contrast to other proposals that are opportunistically invoking Covid-19 to advance unpopular pre-existing agendas, such as tariff cuts on agricultural products and new rules electronic commerce, this would have a genuine on-the-ground impact on recovery.

The counter argument that New Zealand firms can also bid for procurement contracts in other countries on a “level playing field” has two fatal flaws. One is a simple reality check. Few New Zealand firms have the capacity to bid for and win large overseas contracts, even when they are given the opportunity to bid, and any profits they make will have little flow-on benefit to New Zealand.

Second, and more importantly in the context of post-Covid recovery, government procurement cannot be reduced to a quest for market access. It has always served multiple objectives and needs to be freed from the constraints of free trade agreements to do so again.