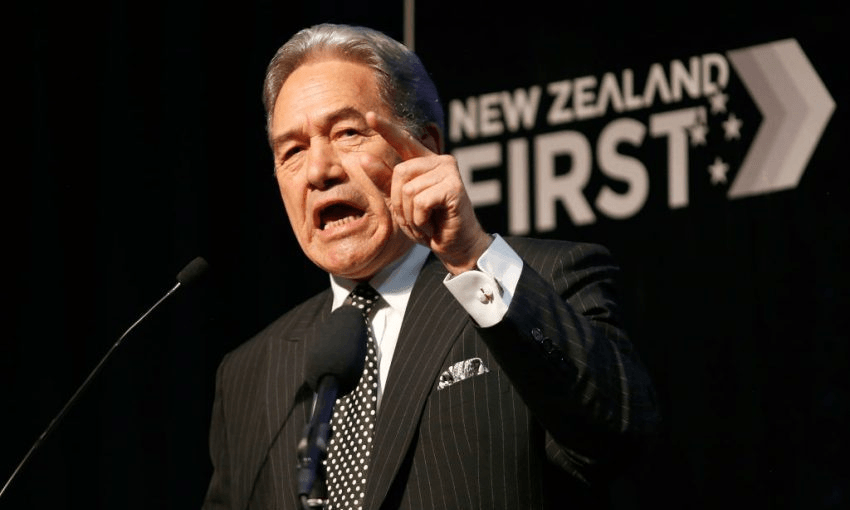 Leaks of NZ First Foundation records raise big questions about the party’s funding, and there’s every chance of more to come. A glance at history suggests the scale of the problem. An early election may not be a bad idea at all, suggests Danyl Mclauchlan

During its time in government New Zealand First has fundraised aggressively. They’ve also taken very strong policy stands on behalf of specific industries and companies. But no specific donations have been declared; instead the party has been funded by loans from the New Zealand First Foundation, a mysterious entity run by two of Winston Peters’ most trusted advisers.

Those advisers are his lawyer Brian Henry, and Doug Woolerton, a former New Zealand First MP who now runs a Hamilton based lobbying company called “The Lobbyist”, which advertises the provision of “all ancillary services such as media strategies, speeches, drafting changes for legislation, submissions to select committees and personal introductions when appropriate”.

And now Waikato Times reporter Matt Shand has what almost every investigative journalist in the country has been sniffing around for: leaked records from the New Zealand First Foundation. His story on Stuff reports that the foundation has been accepting party political donations and paying for electoral expenses in a way that appears designed to avoid transparency or oversight.

Stuff doesn’t name the donors in the document – one source has told me that both Winston Peters and the donors could be horribly embarrassed if identities were made public. But Stuff says the foundation received 26 donations of $325,900 in just a five month period, adding: “Donors to the foundation include food manufacturers, racing interests, forestry owners and wealthy property developers.”

Winston Peters is the minister of racing. Shane Jones is the minister of forestry. If the food manufacturers are exporters then they might be impacted by Peters’ decisions as minister of foreign affairs. New Zealand First has publicly, repeatedly, announced that they were responsible for killing the Ardern government’s proposed capital gains tax. The public has a right to know that they were being funded by property developers.

We’ve been here before, of course. When Winston Peters was minister of foreign affairs and racing under the previous Labour government it was revealed that he’d taken donations from Sir Bob Jones, Sir Owen Glenn and the Velas, a wealthy family prominent in the racing industry. The donations were made through an organisation called the Spencer Trust, which was run by Peters’ brother. An investigation by Parliament’s Privileges Committee found that Winston Peters had attempted to conceal the donations and then lied about it, and the committee voted to censure him. The scandal dominated the 2008 election. John Key ruled out working with Winston Peters. Helen Clark didn’t. Labour lost, and New Zealand First was voted out of parliament.

There are two separate issues here. The first is whether New Zealand First has broken the electoral law. That’s a matter for the Electoral Commission, and if they decide the law was been broken they can refer the matter on to the police or the Serious Fraud Office. Peters says he is looking forward to discussing the matter with the Commission, and is “confident that New Zealand First has operated within electoral laws, now and for the last 27 years”.

The second is whether senior ministers in the current government could get caught up in accusations of corrupt practices. When you have companies and individuals making secret donations to a party that holds the portfolios in those industries, there is every reason for the public to ask questions about whether their government is behaving defensibly.

New Zealand First’s coalition partners have dreaded this moment for two years. The prime minister’s instinct will be to distance herself from the scandal and hope that it goes away. “We assume that the law has been followed.” “It’s a matter for the Electoral Commission.” “I am not responsible for the New Zealand First Party.” And so on. But the matter of whether or not she presides over a government linked to allegations of “corrupt or illegal practices” is not a matter for another party or office. The integrity of the government is the prime minister’s responsibility.

She could ask the auditor general to find out whether these donations influenced the spending of government funds. She could call for the Privileges Committee to determine how these donations were solicited whether they’ve generated conflicts of interest that were not disclosed, and whether they’ve caused ministers to mislead parliament. And she could suspend ministers from their portfolios while these investigations are being carried out.

It is safe to assume Winston Peters’ reaction will be to try and turn this story into a confrontation between himself and the media. Arguing about whether this is all “fake news” and reporters are “psychos” is a much more profitable story than whether or not political donations have been concealed. Peters knows that media outlets will almost always take this bait and make the story about themselves instead of anything substantive.

Labour’s concern will be that if it came to suspending a senior NZ First minister, or attempting to investigate their fundraising activities, the party is likely to retaliate by withdrawing confidence and supply from the government and forcing a snap election. But this is the latest – and most serious – in a series of leaks from within New Zealand First; a party that seems to be in an advanced state of fragmentation.

One of the things that led to the end of the Clark government was the endless drip feed. The allegations of secrecy and deceit swirling around NZ First just kept coming. And now this government is trapped in the same political hostage situation, with the same politician, facing accusations of engaging in the exact same practices. An early election might be worth the risk if the alternative is a year of ongoing leaks and allegations resulting in a contest that makes Simon Bridges prime minister.