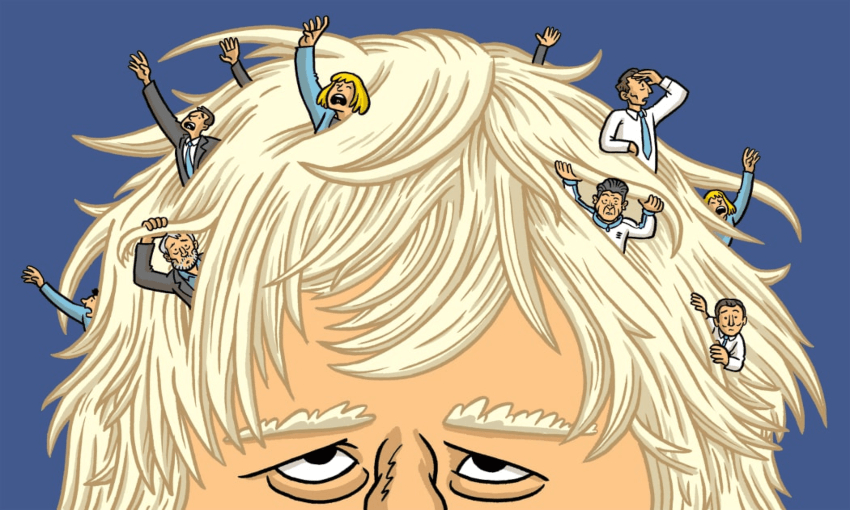 Boris Johnson will be replaced as leader and prime minister in September. (Illustration: Toby Morris for RNZ)

‘A government run by journalists’: The lies and fall of Boris Johnson

Boris Johnson will be replaced as leader and prime minister in September. (Illustration: Toby Morris for RNZ)

In a special episode of politics podcast Gone By Lunchtime, Toby Manhire talks with UK-based editor Richard Adams about the patterns of scandal and fabrication under Boris Johnson, and his last days as British prime minister.

British politics have been tumultuous for the last six years, dominated by the upheavals of Brexit and Covid-19, scandal, and leadership battles in both of the main parties. “The last few months have been like all that on speed”, says Richard Adams, a New Zealander who has worked as a journalist in the UK, first at the Financial Times and then the Guardian, for more than 25 years.

The series of scandals and dysfunction that bedeviled Boris Johnson’s government, and ultimately led to his MPs forcing his resignation, was in part born of a “government run by journalists, which meant they had very journalistic priorities”, says the Guardian’s education editor and former editorial writer, who popped in to The Spinoff last week to record a special episode of Gone By Lunchtime during a visit back home in New Zealand.

Johnson notoriously first came to public attention as EU reporter for the Daily Telegraph, where his dispatches routinely stretched the truth. He later became editor of the Spectator and a highly paid columnist for the Telegraph. But Johnson is far from the only former journalist within the Tory government, said Adams, with a similarly high quotient of MPs from marketing or PR backgrounds.

That was part of what led to an ambition “to produce something that could fill the following day’s newspapers or broadcasts. So they’d come out with initiatives, just announce stuff, even though it wasn’t going to happen. They announced an education policy that 90% of primary school were going to pass a certain level of maths and English by 2030. Well, in 2030, nobody in the government will probably be involved. But they announce it, and it’s on the front pages and they were probably looking good. But there was no funding, there were no policies attached to this; it was just an announcement.”

There was a tendency, too, to exploit the journalistic protocols of presenting “both sides” of a story. “Boris Johnson’s position was you just deny it. You keep denying it until somebody can actually prove something, and then you admit that but deny everything else. That just erodes your position. You had the situation where special advisers for No 10 were just having to lie, and were then having to apologise to journalists for lying to them. Which was a crazy situation, because they’re also civil servants and bound by civil service codes.”

The “same pattern” was discernible throughout Johnson’s waves of scandal, says Adams. “There would be an allegation made, whether it was parties, or [an MP’s] sexual harassment, or wallpaper at Downing Street, all sorts of things. The first thing would be a flat denial, No 10 would just deny it. And then some evidence would be produced. And there’d still deny it but the language would be very carefully constructed. ‘Boris Johnson wasn’t aware of this’ or ‘the government hadn’t heard of this allegation’.”

In a conversation that also covered the Conservative leadership race and the state of the UK Labour Party, Adams separately suggested the areas in British education where New Zealand policymakers might look for inspiration, and detailed the “extremely strict” approach of the Michaela School, which was richly praised by National leader Christopher Luxon after his visit to the North London free school earlier this month.