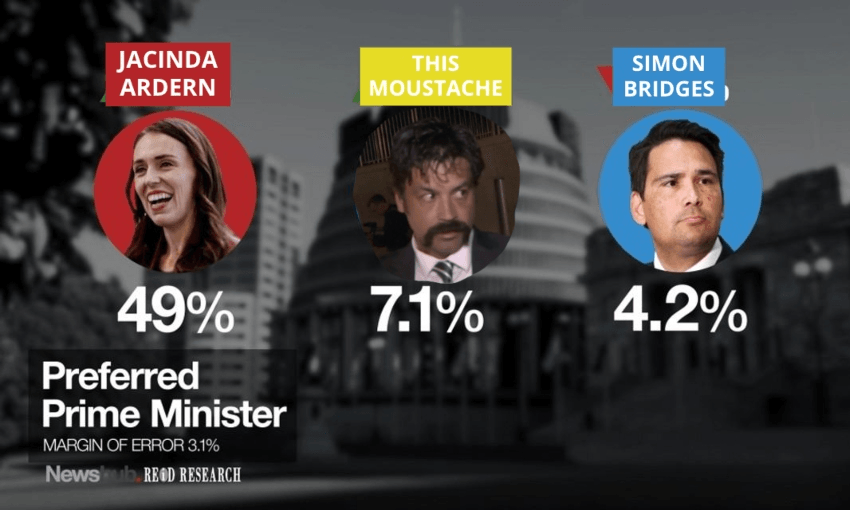 Too much news? Here’s the only political round-up you need.

I spent Saturday evening reporting from the Act Party election event and witnessed a crowd of Act supporters mumble halfheartedly through Sweet Caroline despite the DJ’s increasingly desperate words of encouragement. I tell you this only to give an indication of the headspace I’m currently occupying.

Historic. Landslide. Red wave. Nat-mare. These are all words that have been used to describe the huge win for Labour and the devastating (there’s another good word) loss for National. You can’t throw a rock without hitting a piece of analysis (including on this site, including this very article) so instead of adding to the pile, here’s an assortment of memes.

About three weeks ago Judith Collins looked as if she might make a good showing this election. Then she said talofa a bunch and talked about obesity for some reason and just didn’t know when to stop until the country voted and said here, stop right here. Her concession speech on Saturday started quite emotional and then turned into a “you’re all fools and you’ll regret this” speech which, sure, go ahead and think it but don’t say it when you literally just lost.

No one (wo)man should have all that power. Clock’s ticking and Jacinda Ardern, now leader of a political party with the power to (comfortably!) govern alone can do whatever she wants. OK no, she can’t do whatever she wants given the many taxes she vowed not to implement if re-elected. But there’s no New Zealand First handbrake anymore so whatever happens in the next three years will be exactly what Ardern and Labour want to happen. In the party’s list of 10 reasons to vote Labour shared last week, number one was making Matariki a national holiday. I support the notion but when a national holiday is your number one reason for a second term, that’s not a great start.

What a race Auckland Central was. Remember when Helen White told Chlöe Swarbrick to drop out? Remember when she said it twice? Remember when Simon Wilson told White to drop out? Everyone was telling everyone to drop out except Swarbrick, who campaigned hard on the ground with her deputy (the vintage green sweater that honestly may have beaten her if it became a candidate). Now Swarbrick has won an electorate that even the most biased of political pundits said she had no hope of winning. We love an underdog win and we love to imagine White and Swarbrick bumping into each other in the Beehive (White got in off the Labour list) for the next three years.

Somebody save Nikki Kaye

Speaking of Auckland Central, outgoing MP Nikki Kaye agreed to commentate during TVNZ’s election special for some reason. It was four hours of Kaye looking miserable while John Campbell and Hilary Barry joked about her comfort eating to get through National’s pain. Was it heartbreaking? Yes. Did I enjoy it? No. Did it inspire a perfect female replica of Sad Ben Affleck? Yes.

The hipsters are back

Swarbrick may have been the star of the night, winning an electorate seat for the Greens for the first time in nearly three decades, but the Green Party as a whole had plenty to celebrate. Despite Labour’s huge surge in popularity, the Greens managed to rise with them, collecting 7.6% of party votes and returning to parliament with 10 MPs. Of all the parties held on Saturday night, theirs looked the most jubilant. Act also had a big night with 8% of party votes, but that 8% was partly overshadowed by the overall dismal state of the right block and the fact that the party was held at Headquarters.

Billy Te Kahika, Jami-Lee Ross and Advance NZ barely even registered in the final results. What a pleasant and heartwarming surprise to find that despite being popular on social media with conspiracy theorists and plandemic truthers, the Party of Bad Ideas received virtually no support in the form that counts. To add literal insult to metaphorical injury, Ross appeared on Newshub Nation, apparently for the sole purpose of being – I hope I get this phrasing correct – absolutely owned by Tova O’Brien. Ross has previously complained about being “deplatformed”. Now that his interview has gone viral, he’s on every platform! Unluggy for him, he’s on every platform getting absolutely owned.

This moustache is the president now.

Me, the political operative

A few weeks ago I posted a photo of my colleague’s phone suggesting that since they followed me, they might like to follow Chlöe Swarbrick. This same colleague has since had another recommendation.

And that’s it for me. I would now like to remove myself from this political narrative. Next time my colleague gets a recommendation it will read “Since you follow Madeleine Chapman, you might like officialroyalfamilydancecrew”. See you in three years or on a rabid argument thread about snack preferences. Tōfā soifua and be nice to each other.