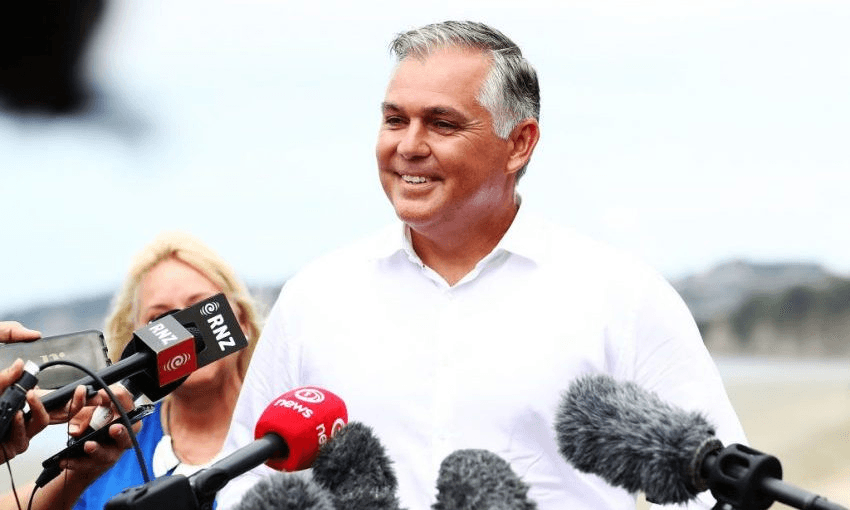 Mark Mitchell announcing his candidacy for the leadership of the National Party. Photo by Hannah Peters/Getty Images

By Daniel Couch
Guest writer
Made possible by

Mark Mitchell announcing his candidacy for the leadership of the National Party. Photo by Hannah Peters/Getty Images

As founder of a multi-million-dollar private military and security company that operated in Iraq, Mark Mitchell needs to tells us where he stands on war-for-profit, argues Daniel Couch.

Mark Mitchell’s announcement of his intent to run for National Party leader is a significant moment in New Zealand politics. Throughout his career he appears to have been a successful police officer, businessman, and, to date, politician. One of these successes, however, is not like the others.

During an appearance on the AM Show yesterday, Mitchell said that after a stint with the police, he headed “overseas, formed my own company, which I was very proud of. I became chairman and CEO of that. And then came home and wanted to get back into public service and then ran for parliament.” So just where was this “overseas”? And what was this company? Overseas was Iraq, and Mitchell’s company provided private military and security services. Mitchell’s period away from public service saw him build a multimillion-dollar business in a highly lucrative and globally competitive commodity – war.

Rather than asking, as a nine-year-old might, if this aspiring party leader has killed anyone, we should be asking what he intends to do to ensure New Zealand money doesn’t end up promoting further violence. The signs are not encouraging where that’s concerned, as Mitchell has already been proactive in promoting private company bids for New Zealand Defence Force money. Billions of dollars of it.

To be clear, it isn’t the man that is necessarily cause for concern here. Rather, it is the relationship that Mitchell has with a highly unregulated and profit-oriented part of violent conflict that should raise concern for New Zealanders. Private military and security contractors have become a fundamental part of war. They have been instrumental in creating the increasingly murky and ethically bankrupt landscape of modern warfare. Quite apart from the absence of any real accountability for violations of human rights, the United Nations states that the use of PMSCs fundamentally threatens democracy in several ways. For instance, the use of contractors absolves nation states from their responsibilities to their own citizens around transparency and democratic control. Additionally, incentivising conflict through massive expenditure of public funds to the private sector increases the influence of private business on political choices and national policies.

New Zealanders have made their views clear when it comes to public money and profit from conflict, if only partially. Now the day has come where we must ask ourselves how we feel about the relationship between PMSCs, our democracy, and the potential for New Zealand public money to promote violent conflict. And we must consider the implications of a closer relationship between top New Zealand government figures and their connections to war-for-profit.

It might be good to know, then, what Mitchell’s position is on these matters. So I asked him three questions by email:

Two significant issues raised by the UN on the use of PMSCs are 1) the undermining of democratic accountability and control on the use of armed force, and 2) the perpetuation of violent conflict due to allocation of public funds to the private sector, and subsequent influence of private interest in national politics. Given your experience, what comment do you have on these two concerns?

How do you see the role of PMSCs in relation to NZDF expenditure and priorities?

How can conflicts of interest be mitigated for a party leader (and potential Prime Minister) to operate in the best interest of peace, who has clear private business interests in war?

Mitchell’s answer? That a guy named David Shearer has written a paper “which contains comprehensive insights into” these issues. With thanks.

Interestingly, Shearer did write a paper on the matter in 1998. It is interesting for two reasons. Firstly, Shearer charts the prevailing attitude in the early 20th century that saw “the idea of fighting for one’s country rather than for commercial interest” give way in the late 20th century to “a ready market for private military forces”. These private armed groups, unlike “multinational forces… do not act impartially but are hired to win a conflict (or deter it) on the client’s terms”. Shearer’s piece is a scathing critique of the profit-motive of Private Military and Security Contractors, and that was well before their proliferation in Afghanistan and Iraq. Is this a hint at self reflection?

But Mitchell’s response is perhaps most interesting, because it isn’t a response. As soon as next week, the country’s largest political party might elect a leader who appears unwilling to answer genuine questions about his relationship with war-for-profit. I wonder what the men and women who serve New Zealand’s Defence Force think of this. I wonder if we can rest easy as a country, knowing the ties our politicians have to the commodification of war. I still wonder what Mitchell thinks. We may have to keep wondering.

In several countries, such as the United States of America, it is commonplace for former soldiers to serve in the highest positions of elected office. In most of these instances that armed service has been within a national military. Mitchell’s engagement with war has been through the private sector, and it has made him a wealthy man. When he sold Threat Management Group in 2010 it was turning over $130 million per year. Where others might pull the trigger for their country, Mitchell, and the soldiers his company employed, pulled the trigger for profit. This fundamental point of distinction is what makes Mitchell’s bid for leader of the opposition a significant moment in New Zealand’s political history, and it is a moment that the New Zealand public won’t get a vote on. That’s up to National’s MPs.

Daniel Couch is a doctoral candidate at the University of Auckland. His research examines the intersection between conflict, education, and state building.