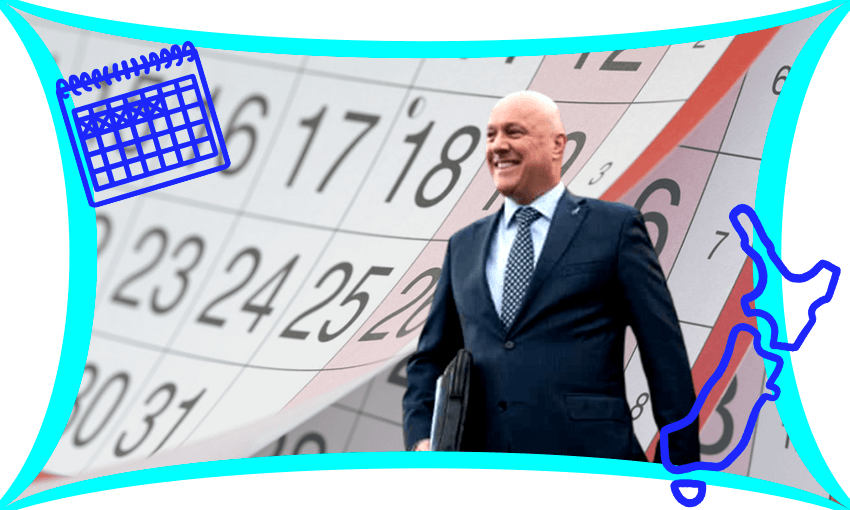 Christopher Luxon wants us to scrap a public holiday. But which one should go?

The National leader says the introduction of a day off for Matariki should mean another day back on, in the name of the economy. Let’s look at the options.

With the prime minister out of the country and a cost of living crisis to talk about, the leader of the opposition has somehow found himself winning headlines in a new role as the grinch who stole Labour Day. “Look, it’s a great idea,” said Christopher Luxon on Morning Report yesterday of the Matariki public holiday newly introduced this year, “but which of the other holidays are you going to cancel?” Then he said: “We’re very supportive of Matariki. Why don’t you cancel Labour Day?”

Luxon’s point was an economic one. He pointed to estimates of as much as a $450 million impact from adding a public holiday. But by sundown, even as he enjoyed a delicious new poll result, Luxon faced his own cost of ad-libbing crisis, cast as captain of pecuniary cancel culture. He was just being “facetious” on the Labour Day thing, he said (Labour is also the name of the current governing party). He back-pedalled on whether a future National government would ditch a holiday, saying it was up to the current lot to do that.

Putting the political palaver to one side, it’s an interesting question. If, at a pinch, we had to draw a line through one of the holidays, which would it be?

In case they’re not indelibly etched in your brain, here’s a reminder of the public holidays in New Zealand as they chronologically stand (many are “Mondayised” but let’s not get into that now):

I think that’s everything. Next, let’s consider which could be scrapped, beginning with the least disposable and working our way inexorably towards the grim holiday reaper.

Untouchable. Our national day. A lightning rod for reflection, commemoration and plenty of disagreement.

This is not some kind of last-in-first-out situation. The Māori new year wraps science, history and culture into a blast of star-gazing and it’s here to stay. Hūrē.

We’re a secular nation but Christmas Day is an institution. And even if you’re not into the Jesus’s birthday part of it, what says North Pole snowscape more than sunburn, barbecues and beach cricket? Look, it stays.

Sorry, but this one is conjoined with Christmas. A day for recovering, tidying up, scoffing leftovers and, obviously, boxing. Fight me.

Again, yes, we’re a secular nation, but – and I say this as an atheist – Good Friday is sacrosanct in every sense of the word. I’m increasingly of a mind, too, that it’s pretty great to have this day, and the Sunday around the corner, locked in as days off for most. Shops are open a lot.

A celebration of the eight-hour working day, the October date was chosen to mark the birth of the Maritime Council group of unions. Those are important milestones for our democracy, and deserve their day in the calendar. Also this: after a barrage of public holidays at the start of the year, there’s about six months without a flicker of a state-mandated long weekend. We can really use an October reprieve.

A day for walking into, for staying up to watch the first sun of a new year rise, or at least remembering when you used to do that. Hands off.

You might think this potpourri of holidays across the country – a mix which sends hardworking people into conniptions on discovering their counterparts in another pocket of the country are simply not at work – is ripe for eradication. You’d be wrong. This jumble is a welcome reminder of our geographic differences. We have none of the state-based jurisdictional malarkey of so many countries; we don’t give a toss about local elections; half the country doesn’t know which province they live in. Anniversary days must stay (though let’s move them all to days in winter please.)

Half the time you can’t remember whether it’s a public holiday or not, can you?

If it weren’t for the fact it’s in June (see wintry months, above) this would be first against the wall. Elizabeth is a splendid queen, but her birthday is in April. Could live without.

According to the website Wikipedia, Easter Monday “refers to the day after Easter Sunday”. Which is tremendous but there are a lot of days that are after other days and we don’t shut everything down for them.

In Italy, they call it “Pasquetta” or “Little Easter”, and you have lovely picnic with loved ones. That would be good. In Poland, they call it “Lany Poniedziałek” or “Wet Monday” and douse each other in water, which – no, I don’t like the sound of that at all. The point is: if one day absolutely must go, it’s Easter Monday.

Add another day to the calendar that doesn’t exist, make it a public holiday and remove it

We can do anything we want. We can invent a new holiday – in fact invent an entirely new day on the calendar – and extinguish it in one swoop. Think of it as the quantitative easing of public holiday attenuation. Let’s do it tomorrow.