Republicanism, so Danyl Mclauchlan tells us in his recent Spinoff column, has come back stronger than a 90s trend. It’s quite the topic de jour in all the very best Wellington cafes. Instagram influencers are clambering on board the #ahomegrownheadofstate express. Roving hordes of constitutional law academics are in the streets looking to start fights with anyone wearing one of those “Keep Calm and Carry On” t-shirts with the crown on it.

However, Mclauchlan has some words of caution for those caught up in this whole mad stampede towards change. Having a constitutional order where the country’s head of state is determined by whomsoever first emerged from a British woman’s womb actually makes a lot of sense! To quote Walter Bagehot, it cleanly separates the “dignified” from the “efficient” power of government. This separation then provides a bulwark against the sorts of autocratic, quasi-dictators that we see popping up in places like the US, Brazil and the Philippines. So, why risk messing with what works?

I’d speculate that Mclauchlan’s aversion to republican change reflects a hidden commitment to Team Queen rather than Team Meghan, but that would further trivialise an issue that frankly doesn’t need it. Whether or not New Zealand should become a republic really isn’t the most important collective question we face. Mclauchlan’s probably right that dumping the monarchy won’t solve very many problems – except for one quite notable one. Under our current arrangements, no New Zealander will ever be New Zealand’s head of state. Instead, our entire system of collective government will in theory remain under the sovereign rule of someone dwelling 18,800 km away from us, all because that country declared us to be their colony some 181 years ago. And our formal rites of government will continue to pay homage to the eldest born of the eldest born of the eldest born (etc) of a family that got imported from Germany because the English once decided they didn’t like Catholics or something. It’s the ultimate embodiment of the genetic lottery; a literal “born to rule” principle hard-baked into the core of our governing practices. 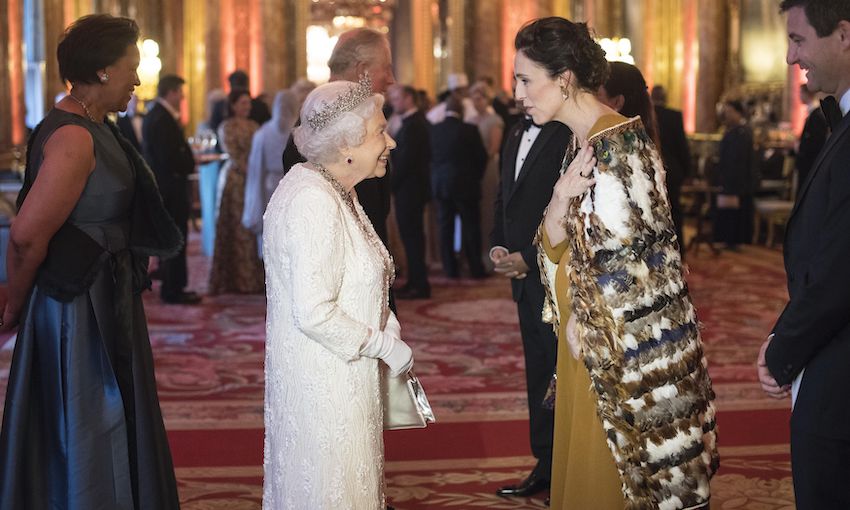 This problem admittedly is more symbolic or conceptual in nature than practically pressing. And I accept that for a lot of people it isn’t actually a problem at all. After all, a majority of us seem perfectly content with keeping the emblem of another country as a constituent part of our national flag (albeit that the alternative on offer was a glorified beach towel). The hangover of colonialism runs deep, and there’s a comfortable nostalgia in the notion of having a queen or king to look after us. Plus, it gives an extra frisson to the whole roiling royal family psycho-drama … these aren’t just random privileged individuals living out their problems in public, they are our privileged individuals (sort of). That’s why Harry and Meghan’s interview with Oprah really, really needs to lead our news bulletins!

But equally, we may at some point come to see this whole arrangement as being somewhat ridiculous and outmoded and not-at-all in keeping with our emerging self-image as a South Pacific nation where Kupe came ashore centuries before Cook happened to stick the Union Jack into the whenua and claim possession for the Crown. And if we ever do so, we might think that having “one of us” as our head of state better reflects that nascent national identity than whichever of Elizabeth’s kids or grandkids follows her onto the throne. Were that to happen, would it really open Pandora’s box in the way that Mclauchlan’s jeremiad suggests?

I think not, because I think Mclauchlan is guilty of a category mistake. He’s looked at some places overseas that are republics, diagnosed some genuine problems with them, and then speculated that such problems could occur here should we become a republic. The problem, however, is that he’s treated all republics as being the same, when they manifestly are not. It’s the same error as pointing to Saudi Arabia’s literal murderer Crown Prince Muhammad bin Salman and saying “see – look at the kind of person who may inherit the throne!” Which rather ignores the fact that not all forms of royal “rule” are the same.

By the same token, the sorts of places he raised as warnings have problems not because they are republics per se, but because they have presidents at their helm who possess independent, extensive and poorly constrained executive powers. Which is something that (to my knowledge) no one at all is advocating for New Zealand. Rather, republican stalwarts like VUW’s Dean Knight propose forms of “soft republicanism” requiring “the minimal necessary change to transition from a constitutional monarchy to an independent state, seizing on the promotion of the governor-general to head of state, in lieu of the sovereign.” So, rather than Dame Patsy Reddy being the local representative of the London-based Queen of New Zealand and exercising powers under the letters patent subject to constitutional convention, she would be the president/tumuaki of the New Zealand state exercising the exact same powers under statute subject to either constitutional convention or statutory limitation.

There then are international models that illustrate what such a set-up could look like in practice. A number of “peer nations that we like to compare ourselves to”, as Mclauchlan puts it, like Finland and Ireland and Switzerland and Germany, all get along just fine without a royal as their head of state. Instead, they are headed up by relatively neutered presidents possessing quite limited executive powers. Those presidents won’t morph into local Trumps or Bolsonaros or Dutertes because their role and powers simply don’t allow for it. Nor should we have any reason to think that a country in which our MPs, armed forces and police swear an oath to be “faithful to New Zealand and its constitution” (or similar) will somehow be at more risk of collapsing into autocratic tyranny than one where they pledge loyalty to a geographically distant queen or king.

Put this way, the push for a republic actually isn’t all that big a deal at all. As Knight notes, it’s a “modest, incremental and pragmatic constitutional reform”. For this reason, Moana Jackson recently told The Detail that he wasn’t particularly interested in the project as it represents more of a symbolic rearranging of the constitutional furniture rather than any meaningful change for Māori.

Which is a perfectly understandable position to take. But it’s a mile away from a claim that we should avoid becoming a republic because Donald Trump.