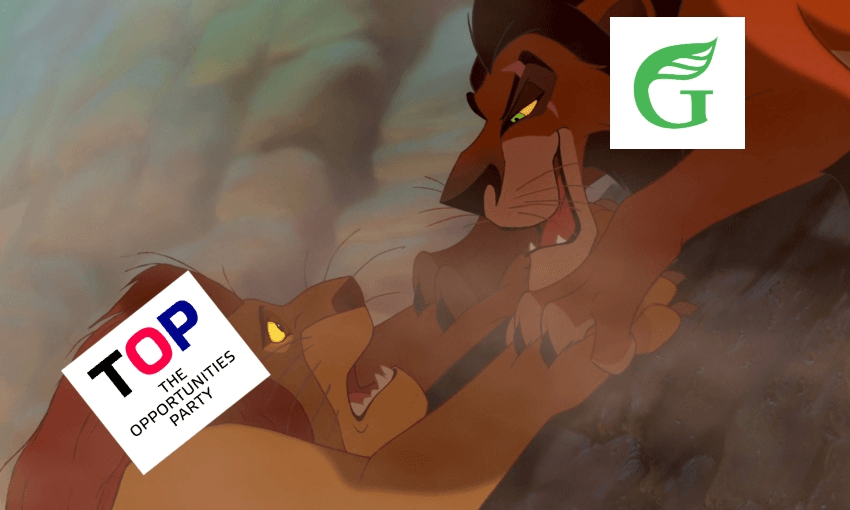 The Greens’ donation cap proposal would simply pull the small party ladder up behind them, argues TOP leader Geoff Simmons.

The Jami-Lee Ross saga has highlighted some of the problems with donations in politics. Greater transparency is certainly needed. However, the Green Party idea of banning donations over $35,000 would be the third strike against any political party outside parliament.

At the last election New Zealand lost two political parties from parliament. United Future is gone forever and the Māori Party is recovering its mojo before the fight to get back into parliament in 2020. One party (ACT) survives only on the life support provided by its big brother National. At the next election, going by past performance of coalition governments, we could lose another two parties; New Zealand First and The Green Party themselves. This would wind the clock back to the days of First Past the Post.

Bryce Edwards points out that the deck is heavily stacked in favour of parties inside parliament. The five parties inside parliament share $122m in budgets for “Party and Member support”. This includes MP salaries, staff and their electorate offices. This money is supposed to be used for running the country, but we all know most of it goes on politicking. In addition they another $8m for travel and communications. There is also over $4m for election year advertising, the vast majority of which goes to the parties in parliament.

Meanwhile, even former MPs get more from the government coffers than political parties outside parliament.

Life outside parliament is very difficult for a political party. Some people I speak to are shocked to hear that parties outside parliament don’t get any funding, except for a meagre advertising allowance in election year. My position as Leader of The Opportunities Party is currently a volunteer, part time role. The fundraising we are doing right now is the only way to change that.

Cutting out large donations would effectively force political parties outside parliament to source all funding from their membership. This could be seen as a good thing, forcing parties to build a popular movement. After two years of operation The Opportunities Party already has around 4,000 members, compared to the likes of Labour with an estimated 10,000 members. We continue to build our numbers, but it would still be very challenging to raise the kind of money needed to run a credible campaign from outside parliament solely from members.

Much of politics is a matter of momentum. People will get behind something if they see it working. Retail developments operate on the same principle – they rely on large ‘anchor’ retailers to invest in a development, then others follow. The same principle applies for political parties; large donors are one of the few ways to get momentum.

As Bryce Edwards points out, the only party to be elected into parliament since the advent of MMP is ACT, and they had some serious money behind them. In this context New Zealand First’s return to parliament in 2011 after they fell from grace in 2008 is truly astonishing.

Ironically such a rule would hit the Green Party itself. Depending on whether the $35,000 limit was annual or over a certain time period, the Green Party would not have been able to accept $65,000 from Phillip Mills and almost $284,000 from the Estate of Elizabeth Beresford Riddoch in 2016. They may not even be able to continue the practice of MPs tithing 10% of their salary to their own party.

However this proposed change would hit parties outside parliament harder, because we don’t have access to the $130m per year in taxpayer money parliamentary parties have. This would not be the only barrier new parties have to hurdle getting into parliament. Such a change would be the third strike to ensure new parties are kept OUT, effectively giving existing parties a monopoly.

The first strike is the 5% threshold. This was imported from Germany along with the rest of our MMP model. The reason the 5% threshold was created was to keep fringe parties like the Nazis getting a foothold in Germany. With the rise of the AFD, the threshold has clearly failed in this respect. Meanwhile in New Zealand it keeps out new parties and new ideas from parliament.

There really isn’t any good reason for any threshold at all. However, the least politicians could do is lower the threshold to 4% as recommended by the MMP Review in 2012.

The second strike was the waka jumping law, which the Green Party helped pass. I’ve previously written about how bad this law is for democracy in the Spinoff. In summary, waka jumping has been the source of most new parties in recent decades, including New Zealand First.

Capping donations would be the third strike against new parties. In this context, the Green Party suggestion looks a lot like they want to pull up the ladder behind them, preventing new ideas and new parties getting into parliament. They’d better hope they don’t fall out of parliament in 2020 because the odds would then be stacked against them getting back in.