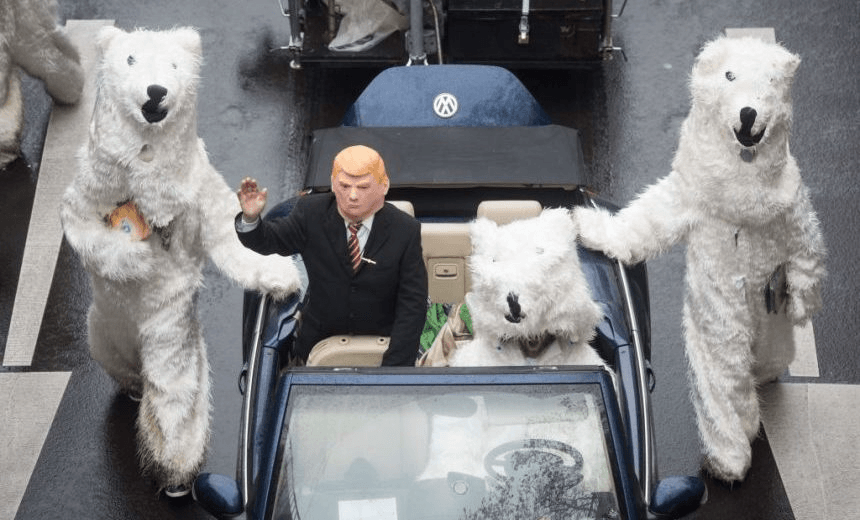 Our rating of NZ’s climate target? Not good enough. The heat is now on James Shaw

By Bill Hare
Guest writer
Made possible by

The Climate Action Tracker reveals the NZ ambition is not ‘fine’ as claimed, writes Bill Hare, a physicist and climate scientist and a former lead author for the Intergovernmental Panel on Climate Change.

New Zealand’s new climate change minister James Shaw is stepping on to the international stage for the first time in his new role at the climate talks in Bonn, Germany.

The New Zealand government’s newly announced climate policies – with the goal of making New Zealand’s electricity system fossil fuel free by 2025 and reducing emissions to net zero by 2050 – has drawn international praise. They are strong new goals and, when implemented, would put New Zealand toward the front of the international pack. These goals appear to be quite consistent with the Paris Agreement’s 1.5C warming limit.

But how can we weigh up countries’ commitments, particularly in relation to others with different populations and economies?

The Climate Action Tracker is a consortium of three scientific research organisations with globally-recognised experts and IPCC authors that have been assessing and rating the details of government climate pledges and actions globally since 2009.

Views on what is fair and equitable analysis of effort-sharing to meet global climate goals can – and do – differ. Rather than choose one approach we use an effort sharing and equity methodology that’s based on a range of more than 40 scientific studies that is put within a transparent framework.

We calculate a “fair share range” based on all available – and scientific – approaches, and apply this framework to all the countries included in our analysis. This allows for a comparison of pledges and/or targets of different countries – based on sound scientific analysis.

This week, we have published our latest assessment of government targets in 32 countries, covering around 80% of global emissions.

We have rated New Zealand’s Paris Agreement target as “Insufficient” because it is not consistent with the Paris Agreement and, if adopted by all, would lead to warming of up to 3oC – indeed we do exactly what Prof Dave Frame advocated in his article for the Spinoff last week, where he asserts that New Zealand’s climate target is “fine”.

He suggested two ways of comparing international climate targets: looking at what would happen if all governments were to take the same approach, and making a direct comparison with other countries.

In New Zealand’s case, the CAT has found that if all governments were to adopt the same level of promised climate action under the Paris commitments, global warming would reach well over 2C and up to 3C. We come to a similar conclusion for other countries, such as the EU and Australia. But having a target that’s comparable to other countries doesn’t make this enough – they all need to do more.

The task ahead of us all is to live up to what 192 governments agreed in Paris in 2015: to hold warming well below 2C and to make efforts to limit warming to 1.5C – not to do as little as everyone else.

The Paris Agreement target goes beyond what the international community agreed in Copenhagen in 2010 – to limit warming to below 2C. This is why governments must step up both their targets, and their action to meet them. Most targets put forward are not even consistent with the Copenhagen goal, let alone what was agreed in Paris.

The big problem at present is that the policies of the previous NZ government are, according the scientifically based rating system of our assessment under the Climate Action Tracker, “Highly Insufficient”. In other words, if all governments were to implement climate policies with the previous government’s level of ambition the world would warm 3-4C above pre-industrial levels.

If you compare New Zealand’s climate policies with others, it is immediately obvious that the gap between targets and action is much higher for New Zealand (and for Australia) than, for example, the EU.

Both China and India are set to overachieve their targets.

Previous climate change ministers like Tim Groser and Paula Bennett were always anxious to point out that New Zealand’s emissions are only 0.2% of the global problem.

But the world cannot keep warming to 1.5C unless everyone does their bit: 101 small emitters like New Zealand add up to 23.5% of global emissions. Under the Paris Agreement 1.5C limit we world needs to reach zero emissions globally by 2050: if all these small emitters left themselves out of the equation there is no way this goal could be met.

In Bonn, governments are working on agreeing the rules under the Paris Agreement, on how they account for – and report – their emissions of greenhouse gases, and the transparency of that reporting.

James Shaw would be wise to read up on the real detail of how New Zealand accounts for its emissions, where we have conducted some very detailed analysis over the years. In climate policy, details really matter, and the rules of accounting can make the difference as to whether emissions rise or fall in the real economy, as opposed to in ministerial press releases.

In New Zealand’s Paris Agreement target, it is very unclear as to how NZ intends to account for different “sources” of greenhouse gas emissions and “sinks”, making it difficult for the CAT to assess. We presume the reason is because the Paris Agreement’s accounting rules for land use, land use change and forestry are still under negotiation.

Loopholes created under this set of rules have always been a difficult issue – and New Zealand has a very special reputation for its long history of promoting land use and forestry accounting rules whose end result is to disguise rapidly growing emissions. NZ is not alone in this. Australia has also benefited from a complex set of rules that have been designed and promoted to avoid taking action to cut actual greenhouse gas emissions in the real economy.

The negotiation of the Paris Agreement rule set will benefit substantially if the minister moves to reverse what amounts to a 25-year long stance of promoting these creative accounting approaches for land use change and forestry that ultimately disguise inaction.

The first thing the minister could consider – and that would help demonstrate to the international community that there is a new regime in town – would be to ratify the Kyoto Protocol’s Second Commitment Period. Right now, New Zealand claims to “follow the rules” of the Protocol, but mysteriously doesn’t want to ratify.

Our assessment of New Zealand shows that there have been few – if any – new policies to cut emissions since 2009. From what we understand about the Ardern government’s policies, we expect a range of new policies that will, for the first time in nearly a decade – tackle actual emissions reductions, rather than relying on offsets and carbon trading. This can move New Zealand to become a role model for other countries – for example, neighbouring Australia.

We look forward to seeing these new policies – and being able to easily measure their effects on New Zealand’s emissions profile.