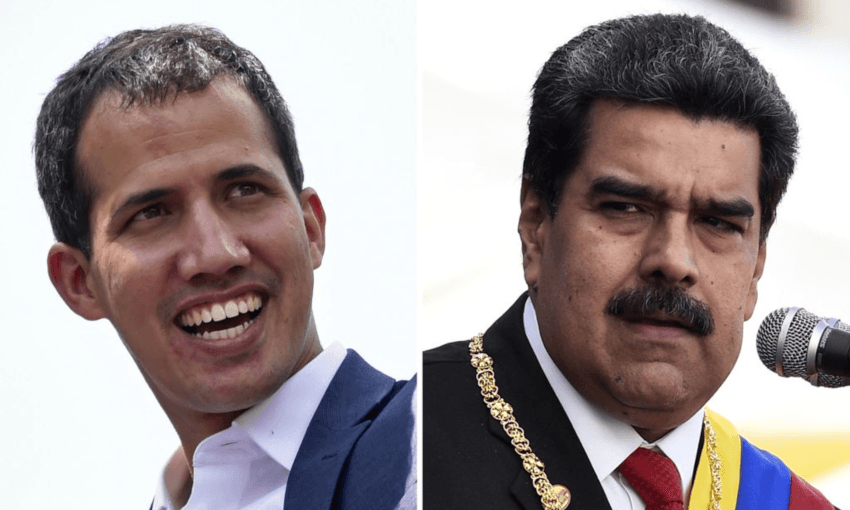 Depending on your point of view, both of these two guys are either the legitimate or illegitimate President of Venezuela (Getty Images)

What the hell is going on in Venezuela?

Depending on your point of view, both of these two guys are either the legitimate or illegitimate President of Venezuela (Getty Images)

Has a dictatorial regime been overthrown by freedom fighters? Have cowardly plotters backed by evil empires tried to defeat the will of the people? Here’s Alex Braae’s cheat sheet sorting out what exactly is going on in Venezuela.

Early this morning, New Zealand time, a man called Juan Guaidó stood with a few dozen soldiers and called on the military to overthrow the government. It doesn’t appear to have worked as yet with Nicolás Maduro still apparently in charge of the country, and more importantly, the military. Maduro supporters have also been coming out onto the streets en masse, which they have done a couple of times whenever the regime has been threatened by coups. And one of the main plotters, an opposition politician called Leopoldo Lopez, is understood to now be hiding out in the Chilean embassy.

Okay, who are these chaps?

Guaidó is the self-described acting president and has been recognised as the legitimate interim president by a wide range of countries. He’s a 35-year-old politician who has become the leading face of the opposition movement in Venezuela.

As for Maduro, he’s the guy who is actually operating as president at the moment, and the head of a regime that has governed the country since 1999. Back then, the president was Hugo Chávez, who governed as a socialist populist, and under his rule, the lives of many Venezuelans improved dramatically.

I’m sensing there’s a ‘but’ coming.

But in recent years, the living standards of the people have dropped dramatically. Huge numbers of refugees flee every year, there are food shortages, and the regime has become more and more dictatorial. That’s partly because of progressively heavier economic sanctions on the country, and capital flight from companies who didn’t want to stick around any more. It would be an utterly terrible place to live right now, and all the while top government officials appear to be living the high life. For example, Maduro was pictured eating an expensive feast at the restaurant owned by ‘Salt Bae’, which reportedly sparked a backlash among the more starving citizens of the country.

So it’s a good thing the coup is happening then?

Oh no, almost certainly not. It isn’t exactly an organic, spontaneous uprising – the coup clearly has heavy backing from the swivel-eyed maniacs in the Trump administration. We’re talking about people like John Bolton here, one of the chief architects of the Iraq War, telling “patriotic Venezuelans” to rise up and secure their freedom. And if they don’t, the US most definitely hasn’t ruled out either a violent invasion or the use of mercenaries, to do the freedom-securing for them. Erik Prince, for example, the founder of professional geopolitical murder firm Blackwater, has been pitching heavily for a contract to send some mercenaries in and just straight up overthrow the government. Generally, when these sorts of operations happen, a lot of people on the ground end up dead.

Why is the US so interested in the freedom of Venezuelans?

Like with Iraq, the US is very keen to liberate the massive oil reserves of the country from oppression. In fact, our old friend John Bolton pretty much said that explicitly on Fox News earlier in the year. “It will make a big difference to the US economically if we could have American oil companies really invest in and produce the oil capabilities in Venezuela,” he said. It’s incredibly brazen, an example of saying the quiet part out loud, that’s frankly just a bit uncouth in 2019.

Yikes. So who are the countries standing up for brave little Venezuela against this imperialist aggression?

Er, well, to be honest, the countries lined up on that side aren’t all that great either. The Maduro regime is backed by countries like Russia, Turkey and Cuba, none of which are exactly model democracies. In fact, Cuba isn’t a democracy at all, and Russia is the kind of rigged democracy where elections are held, but power never changes hands. Turkey is slightly more democratic but has still undergone extremely heavy repression in the wake of a failed coup there too.

Can’t they just have an election and sort it all out that way?

They did actually, there was a presidential election in 2018 which Maduro won with 68% of the vote and an official turnout of 46%. However, there were widespread complaints of irregularities in that election. Both main opposition candidates denounced it as critically flawed, and besides, getting two-thirds support from less than half the population isn’t exactly a ringing endorsement. Internationally, responses to the election pretty much entirely broke down along geopolitical lines – those for the Maduro regime said it was actually fine, and those against the regime rejected it. In fact, Guaidó’s claim to be the legitimate, constitutionally correct president rests on that election being considered invalid.

Where does New Zealand stand on it all?

Off to one side, hoping that nobody asks us for our opinion basically. A recent statement from foreign minister Winston Peters declared that New Zealand would give money to help refugees and wanted new elections to be held. While that could be taken as a statement of opposition to Maduro – and Mr Peters also “registered our objection to the human rights abuses being perpetrated by the Maduro administration” – he also quite explicitly hasn’t endorsed Guaidó.

Whatever it is, it almost certainly won’t be good. One scenario that seems possible is that Guaidó ends up being arrested, which then provokes enough of a crisis that the USA or neighbouring Brazil has a pretext to put boots on the ground. If that happens, it’s almost certainly the end for the Maduro regime.

The other major possibility is that the coup simply fizzles and Guaidó ends up being brought down by the weakness of his own position. It’s understood that top Trump administration figures like VP Mike Pence are furious about his lack of support to date because they’ve invested a lot of political capital in the idea of him being the candidate of freedom. Oh, and also, because Guaidó is very keen to open up the oil industry to foreign investment.