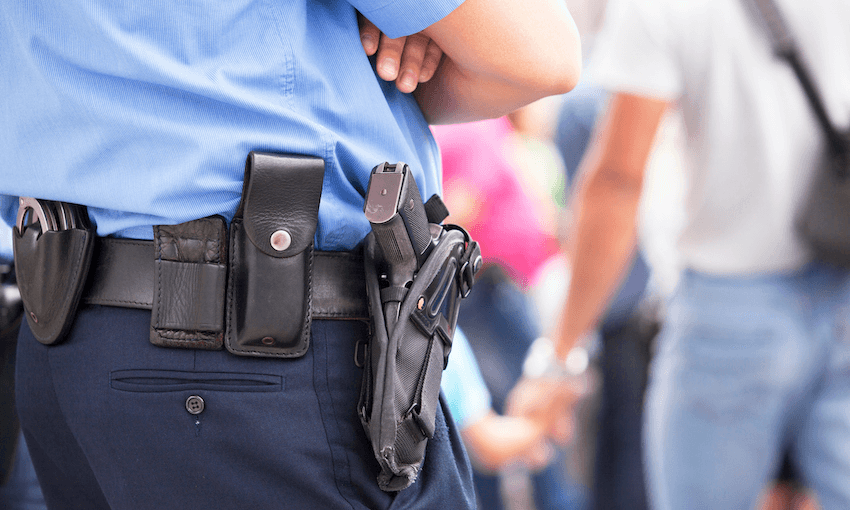 Unsafe and unjustified: Cops carrying guns endangers us all

Frontline police in Christchurch have been told to carry guns until further notice following two incidents in the city during which police were shot at. But more guns are not the answer, argues Emilie Rākete.

Last Saturday, the police say a man fired shots at a patrol car in Christchurch. Then on Tuesday, after a shootout, he was arrested and hospitalised in critical condition. The police say they’re still looking for another person, who they claim is connected to these two incidents. As a result of this, the police have told media that every single frontline police officer in Christchurch is authorised to carry firearms until further notice.

Before we address the specifics of this situation, we should look at the general context. Injuries reported by police on the job are in decline as of last year. With 467 injuries reported in 2017, and a frontline staff muster of around 8000, being a frontline police officer was around three times less dangerous than working in agriculture, forestry, or manufacturing, and only slightly more dangerous than being an admin worker. Police report being injured at work at almost half the national average across all industries. Rates of assault against police have been declining for years too, since their peak in 2009. Deaths at work are tragic, but this year will fortunately be the tenth anniversary of the last time a police officer in New Zealand was the victim of homicide.

These facts may be uncomfortable to acknowledge, but if we’re discussing matters of public safety, the conversation has to be founded on evidence. None of the available evidence suggests there’s a worsening crisis of violence against police that only more guns can solve.  Instead, New Zealand is in the midst of a crisis of violence perpetrated by the police. The police have shot and killed more people in the last 20 years than in the 80 years before that. Māori are almost eight times more likely than Pākehā to be subjected to police violence. One in ten people who have force used on them by police are suicidal or in mental distress. Last year, Auckland man Jerrim Toms was shot four times by police during what his family say was a mental health crisis. Despite claims by police that firearms are a ‘last resort’, Toms’ family has been left asking why officers did not even attempt to use less-lethal options such as tasers.

The shootout on Tuesday has already seen stray bullets fired by police officers tear through a wedding venue more than 200 metres from the scene. The police themselves described these as ‘panic shots’. Militarising the police force of an entire city in response to one individual who might pose a threat is entirely disproportionate. This is a dangerous step in the direction of general armament of the police – a move for which the Police Association has been lobbying for close to a decade.

New Zealand, of course, isn’t the only country struggling with the prospect of arming its police force with firearms. Everyone, by now, is aware of the epidemic of gun violence by American police, who have already killed more than 100 people this year. Disproportionate use of violence by law enforcement is an international problem, one which experts warn is only made worse by making deadly force more readily available to police. New Zealand needs to resist this worsening trend, and that means refusing to allow the escalation of police violence.

When the Christchurch earthquake struck, the government passed a seemingly-random jumble of legislation claiming it was too urgent to allow for public submissions, including raises to Goods and Services Tax and the disastrous Bail Amendment Act. Christchurch has already been the justification used to push policy through without democratic discussion. The Police Association is now using the recent incidents to argue that full armament is inevitable. Nothing, though, is inevitable: New Zealand is meant to be a country in which the people decide the rules that govern our lives. For that to remain true, decisions about civil liberties need to be made by the public, on the basis of the available evidence.

Making decisions in a panic, as the police demonstrated on Tuesday, will lead to bullets flying at innocent people.