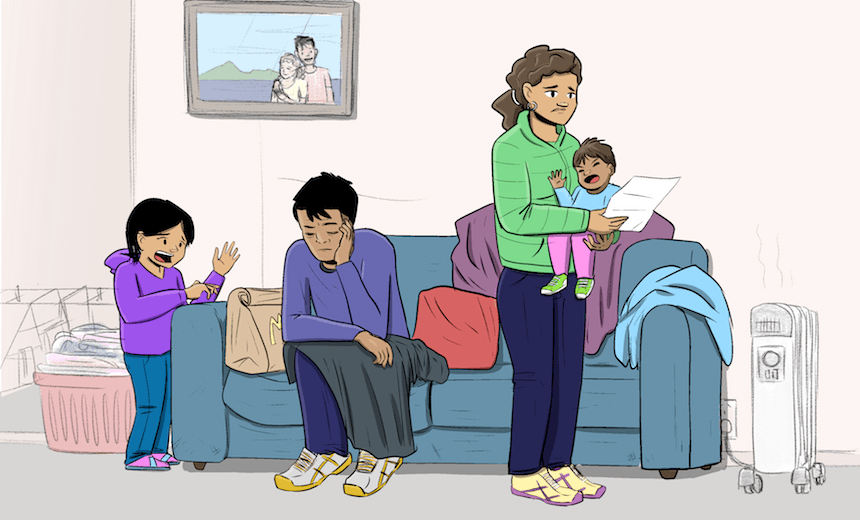 Liz and Sam’s Story: A pick-a-path game about NZ families on low incomes

Today ActionStation and the Morgan Foundation launch Liz and Sam’s Story, a pick-a-path game based on the lives of New Zealand families living on low incomes. In the first of a two-part series, the Morgan Foundation’s Dr Jess Berentson-Shaw discusses the in-depth research behind the game.

After spending two years writing a book about what works for families on low incomes with few opportunities, I came to a realisation. I knew what needed to be done, what the evidence says works to ensure kids thrive. But I also knew it wouldn’t be enough to convince some people; evidence never is.

It is a frustrating place to be as a researcher – to know what policy choices need to be made, but to see people in government consistently make the wrong ones. But that sort of thing is also a challenge. So I did a lot of research into how to talk about the experiences of low-income families in a way that resonates with people who are concerned, but who also feel confused by all the different claims about what works. What I found is that people will get there on evidence, but often only if you to tell a great story in the right way.

And that’s where Liz and Sam came in. Keith Ng from Chewy Data and I decided that a pick a path game would be a good way to tell the story of my research into surviving on a low income with few resources. We wanted people to get a real feel for what life was like for a family such as (the fictional) Liz and Sam’s. These families don’t need pity. What they need are people to understand the complex factors at play in their lives and they need people in government to choose what really works in that context. So we created Liz and Sam’s Story.

When Keith and I talked about what Liz and Sam’s story needed to include, there was no question that one element had to be a paid employment path. Paid work is frequently seen as the solution for families on low incomes in New Zealand. But what my research had clearly shown was that policy focused on driving low-income parents into paid work is actually harming children and driving up poor outcomes, the opposite of what good policy should achieve.

In our story, both Liz and Sam work – most low-income families in New Zealand do. Liz is a healthcare worker and Sam does manual work. In one path we focus on Sam’s struggle to find and retain good work after Liz has a baby.

In New Zealand around 50% of children living in material deprivation have a working parent. While being out of work is a risk factor, the research tells us a paid job is not sufficient to ensure children thrive, especially when paired with policies that punish parents who don’t work in the ‘right way’.

My research revealed that when governments put paid work, especially for parents of young children, at the centre of policy to address low incomes, there are only marginal economic gains and no gains for children in terms of their wellbeing.

Policies with low paid work and punitive conditions at the centre of the solution simply shift the costs and poor outcomes onto the next generation.

In the US a series of large-scale experiments were used to compare policies with a ‘rewards framework’ to those with a ‘punishment framework’. In a rewards framework policies work to ensure parents have more income when they work, usually by allowing people to keep what they earn while on income support and providing free services like childcare. Importantly, work is not a requirement of the support. Policies that have a punishment framework focus simply on moving people off welfare using mandatory employment, sanctions of benefit payment and time limits.

Using a rewards framework was found to increase family income and the use of high quality childcare. Ultimately it was this approach that improved children’s long-term achievement, the studies found. Using the punishment framework there was little overall increase in the financial wellbeing of the family and no improvement in children’s achievements (and the cycle continues).

In New Zealand, tax and welfare policies are conceptualised within such a ‘punishment framework’. In Liz and Sam’s story you can choose to move Liz and Sam to the provinces to save on housing costs. Sam then has to decide between two low paid jobs. While he is in work and hours are stable the family survive – but upon losing a few hours of work, Sam drops below the required hours to receive the Working for Families in-work tax credit and the family has a chunk of income taken away. This happens to any sole parent whose work drops below 19 hours a week, or a two-parent family whose work drops below 30 hours a week (a system that’s much harder on sole parents).

When the family’s income drops basic costs still need to be covered. How can they cover these costs? Inevitably debt quickly becomes an issue for Liz and Sam. For parents on low pay, work-centred policies that punish families if they cannot get the right work in the right way create even more economic stress.

Debt is very hard to avoid

According to Statistics NZ, around 5% of New Zealanders have a negative net worth. We know families are accruing debt because the combination of work and income support is insufficient to cover their rising living costs. Housing is one major issue. For families with children who received the accommodation supplement in 2016, near 90% were paying more than 30% of their after-tax income on housing. More alarming is the number paying more than 50% of their after-tax income: 29% of two-parent families and 35-42% of sole parents.

When costs are high, work is low paid and precarious, and the support system punishing, families can be trapped on low incomes for generations. New Zealand data shows that Sam and Liz’s children will probably have significantly worse health outcomes, educational attainment and earning capacity than children from better-off families, and so the cycle will likely continue as they become adults. We have not met our responsibility to offer these children the best support we can.

It’s easy to get caught up in moralising about parents and to let bias about the value of paid work limit thinking, but neither has a place in strong policy. Rather we need to focus on the evidence showing which policies ensure children thrive.

So what does work for low-income parents, especially with regard to work?

There are many ways to construct welfare and tax policies to ensure all children thrive. Based on the highest quality research people in government could choose to do the following:

The research I present is not entirely in line with those in government’s current way of thinking about families living on low-incomes. Yet they need to carefully consider the experience of people like Liz and Sam, and put aside how they think it ‘should’ work. Instead they need to look at what really does work to achieve the outcomes all of us want. We all want Liz and Sam’s cute wee kids to thrive.

Have a play with the interactive, and pick a path for Liz and Sam. It will give you a good idea of the challenges families like theirs face in terms of work and debt (and food and health). Then consider the benefits to everyone in Aotearoa New Zealand of just doing what works.