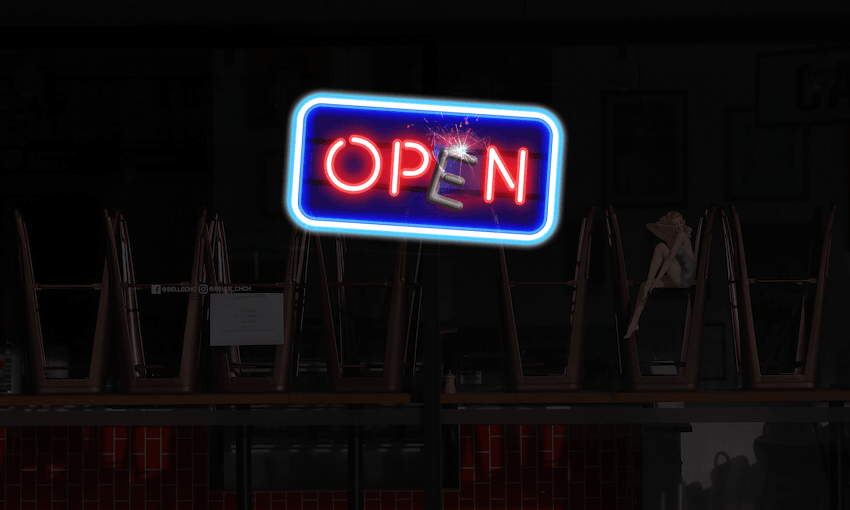 The hospitality industry needs much more than a reset

A group of eateries says there aren’t enough workers to fill barista, kitchen, server and management roles, and is asking the government to step in. But it’s hardly surprising people aren’t enticed by the industry, writes Charlotte Muru-Lanning.

Today, at 11.30am and 7pm, cafes and restaurants across the country will turn off their lights and music and stop service for a few minutes. It’s part of a countrywide campaign called “The Reset”, headed by the Restaurant Association, to highlight staffing problems in the sector. The effort will run alongside petitions, social-media campaigns and further “lights out” strikes by eateries. Some, are even shutting the doors for two weeks – citing a lack of staff.

The association, alongside participating businesses, is raising awareness for what it describes as a “staffing crisis” and “critical skills shortage” in the local hospitality industry. Their solution: bring in more workers from overseas.

Because these workers fill a gap in staffing they say can’t be found locally, they’re asking for an extension of the visas for all employer-assisted work visa holders; border exemptions for critical hospitality workers; and an extension to the hours those on student visas are allowed to work. They also oppose a planned increase from $25.50 to $27-an-hour wage thresholds for essential skills visas.

I don’t doubt that businesses are struggling to fill positions. Hospitality isn’t the only sector that has seen labour shortages recently – exemptions have already been made for agricultural and dairy workers. Plenty of other industries are calling out for the same.

Here’s the thing, though: the hospitality model we have in New Zealand is broken, and the solution isn’t to keep patching this up with cheap labour.

Throughout the pandemic, the poor treatment of hospitality workers has been highlighted in stories across the globe. Hospitality workers have left the industry in droves in multiple countries. In the UK, which is suffering a massive unemployment crisis, it’s been reported that one in 10 hospitality workers have left the industry. Canadian bars and restaurants are struggling to fill positions. In some countries, like the US, it’s been suggested that the shortage is exacerbated by those in that industry dying of Covid-19 at a much higher rate than the general population.

The issues that restaurants face go far beyond the current pandemic. I’ve worked in restaurants and cafes on and off since I was 13 – half my life. Working weekends at school, fitting in shifts around university classes and assignments, and at certain points, full time.

I know how little reward there is for those skilled baristas, cooks, dishwashers, waitstaff and more that keep the industry humming.

There are of course local businesses that do look after their employees, but this isn’t the norm. The industry is rife with issues like understaffing, unpredictable shift times, unstable hours, low wages, bullying, harassment and a whole host of other miserable and dull measures designed to squeeze every last bit of value out of workers.

Reflecting on this, it’s little wonder people aren’t completely jazzed about getting into the industry.

I wish it had been a viable career option, though, because although hard, the job itself was rewarding and something that I can confidently say I’m really good at.

There’s nothing like the calm camaraderie after a good shift when you’re working in hospo. A good shift is elusive. It’s one that could have very easily turned into a bad shift, but didn’t. It’s where you’re run off your feet, but everything and everyone miraculously manages to hold together. Every customer leaves happy, and hopefully unaware of how frantic things were behind the scenes. It’s that buzz, and the lessons learnt along the way that keep you coming back.

In this episode of Dietary Requirements, Chand Sahrawat, who runs three of Auckland’s top restaurants, discusses the skill shortage faced by the hospitality industry.

Follow on Apple Podcasts, Spotify or your favourite podcast provider.

Throughout my time working front-of-house, I became more and more disenchanted with the industry. The conditions only got worse. It was an all-encompassing job that left me exhausted at the end of a shift. Staff were rostered at bare-minimum levels, there was less time to train newbies, break times were shortened, staff meal options restricted, responsibilities and tasks piled on heavier. Yet my real wages essentially stayed the same.

Because of my own experience of the industry, these days, eating out is somewhat complicated. I love restaurants, cafes and bars – in fact, dining out is a big part of my life and work – but I’m also far too aware of the exploitation that goes on behind the scenes.

Lately, there’s been a light shed on the exploitative nature of the industry. We’ve heard of cafe owners bullying staff, not passing on the wage subsidy and taking advantage of migrant workers whose visas and daily costs are dependent on those jobs.

As someone who writes about food, it’s an uncomfortable thing to navigate. Because I care so much about food, I want the hospitality industry to succeed. But for an industry I love, I believe treating its workers properly, immigrant or not, is the only way it can survive. In fact, it’s the only way it should survive.

I can’t help but wonder why our enjoyment of food isn’t more connected with the working conditions of those who produce it.

We’ve watched as this pandemic has illuminated how dangerous it is to have people working in these conditions – poorly paid and poorly protected. It’s bad for workers. It’s bad for all of us.

Knowing this, I really do wonder how we can continue to taste, enjoy and talk about food in the same way as we did before. Can the food we’re eating really be as delicious if the nameless person who made it for us can barely afford their rent? Surely the people that take our order, plate our food and deliver it to us should have a larger bearing on how we value it. If I know that a business treats its workers poorly, I don’t eat there. It spoils the food.

This campaign seems to have co-opted the tactics of contemporary activism; petitions, strikes and graphic, shareable Instagram posts. But this isn’t progressive. They’ve submitted a proposal against extending the sick leave to 10 days. They’ve spoken out against the rise in minimum wage. Both were cited as their members’ biggest concerns.

Frankly, if this is what you’re worried about, I don’t want whatever you’re serving me.

The industry needs to look beyond a quick fix and imagine ways to be a sustainable, viable and enticing career option for workers. There has been a long-term lack of investment in the hospitality workforce. It is that shortsightedness that is at least in part to blame for this mess.

The industry needs a major overhaul.

Why don’t we look into some of the other reasons the hospitality industry is running on such tight margins? Such as increasingly expensive commercial lease costs? Or why our current minimum wage isn’t enough to cover living costs in most parts of the country? Do we perhaps have too many cafes, restaurants and bars?

In a practical sense, I’m left here wondering. Who will be turning the lights off in these restaurants today? Who will deal with the awkwardness, and the customers who feel they’ve been disrupted? In most of these restaurants, the staff will literally be running a strike for their bosses. That is weird.

The conversations happening around food at the moment are a good thing. These conversations mean we care. I only hope that this situation provides the industry an opportunity to address real change, but so far, the only solutions on the table seem to entrench an unsustainable and, as far as I’m concerned, intolerable system.

We can do better than that.