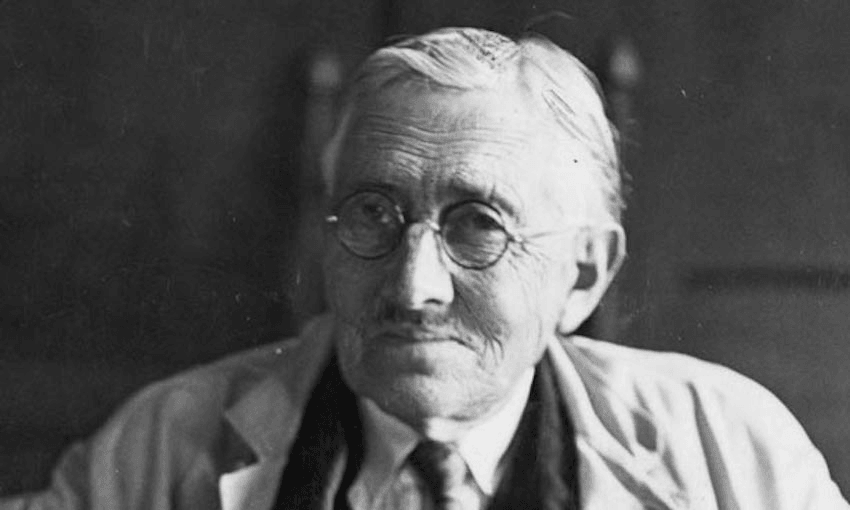 Plunket’s founder was an awful person obsessed with eugenics

Emily Writes speaks to researcher Leimomi Oakes about Plunket’s dark past and the despicable views of its founder Sir Frederic Truby King.

Since becoming a parent six years ago and being introduced to our country’s Plunket health service, I’ve been fascinated by the history of the organisation. By all accounts, its founder Frederic Truby King – generally known as Truby King – seemed to know very little about children while being very into giving newborn babies orange juice. He was also anti-hugging, and I’ve never much admired him for inflicting on generations of parents the idea that showing affection to your babies was coddling (or that you must make them shit on routine).

But my general disdain for old white men telling women how to mother somehow didn’t translate to doing any actual research as I was too busy with my own kids and their refusal to shit on demand. So imagine my non-surprise when I stumbled across a great blog post about the Sir Truby King Gardens in Wellington that outlined his racist and sexist douchebaggery!

Leimomi Oakes, a textile and fashion historian, Toi Whakaari costuming teacher and writer, has begun a fantastic series on her blog The Dreamstress – a beautiful history trip punctuated by the most gorgeous dresses in stunning locations – about the history of places around Wellington named after problematic long-dead white guys.

I wanted to ask Leimomi about what she’s uncovered about Truby King.

First up, I loved your blog post about the Truby King Gardens, I had no idea about their history. What made you want to look into them?

I read all the plaques at the gardens the first time I visited them, and thought “wow, this guy sounds amazing”. I’m the kind of person who always wants to know more so I went home and looked up everything I could on Truby King – including searching him on Papers Past, where you can read pre-1940s New Zealand newspapers. And suddenly he wasn’t so amazing. It turned out that I even had historian friends who play an (alarmingly hard) game called ‘Who said it: Truby King or Hitler?’

So who was Truby King?

He was a health reformer, most famous for founding the NZ Plunket Society. It was named for Lady Plunket, wife of the governor general in 1907. The society’s goal was to ‘Help the Mothers and Save the Babies’, and was aimed at improving hygiene, health, and child-rearing practices. Which sounds lovely. But… King was also a huge proponent of eugenics, had some terrible ideas about women’s ability to be both mothers and educated, and was a massive racist. And these ideas were heavily, heavily reflected in the early Plunket Society policies.

The eugenics stuff is grim – as is the way the early Plunket Society was used as a vehicle for it. Can you tell me more about that?

Early Plunket Society writings include phrases like “The Race marches forward on the feet of Little Children” and yeah, that totally, 100% meant the white, European race.

Because King was really into eugenics, he believed that anyone who he viewed as defective shouldn’t reproduce. Defectives, as described by a NZ politician of the time, included “alcoholics, imbeciles, illegitimate children (and their mothers), prostitutes, criminals, the feeble-minded, lunatics, epileptics, deaf-mutes, the unemployable, the tubercular, the immoral (e.g. homosexuals), anyone from another race, those with incurable diseases.” Ironically, King was tubercular, and he and his wife weren’t able to have children, probably because she’d suffered from childhood rickets.

It’s so astonishingly bleak. Given he was so messed up, it’s not really a surprise that he was also sexist, but then you can’t pass that off as nothing given he predominantly set up how mothers should be viewed and treated in New Zealand society. Can you talk about some of his weird beliefs about women as mothers?

Despite being friends with some of New Zealand’s early female doctors, King firmly believed that education was detrimental to women’s ability to be effective mothers.

He lectured that women who aimed for advanced education or chose careers had ruined their ability to be good mothers, and were betraying their race and their ultimate role. He believed “the body was a closed system with a limited amount of energy. The education of girls, in anything other than domestic skills, used up their energy and could make them unable to breed or breastfeed.”

Despite the fact that Truby King’s wife Isabella had a column, we don’t seem to know much about her beyond that? Like if she held the same views?

Yet another unfairness and iniquity related to Truby King: Isabella was very much his helpmate, was hugely involved in Plunket, and was equally responsible for almost all his work. She wrote an incredibly influential newspaper column called ‘Our Babies’. And yet she received no individual honours. She has no biography in the Encyclopedia of New Zealand. She may also have been problematic, but she was influential. She shouldn’t be overlooked.

Why do you think we don’t learn about the shitbaggery of white men? We seem to just hear about their achievements – I certainly didn’t know Truby King was so into eugenics. I think Plunket should say something about Truby King, but it looks like they haven’t so far. What do you think would be the best way to handle the ‘your founder is a racist sexist’ thing?

I think we don’t want to address the less awesome aspects of all of our heroes– regardless of gender or culture. And we have a really hard time reconciling things that are doing a lot of good, like Plunket, with all the bad things they were associated with in the past. It’s a lot simpler to pretend the bad didn’t happen.

The Plunket Society has taken care to distance themselves from the less salubrious aspects of their origins. However, if they ever directly addressed or apologised for them, I cannot find any evidence of it. Their website still lauds King as ‘visionary’ and ‘idealistic’. Every major King and Plunket anniversary is celebrated in New Zealand with hyperbolic accolades that totally overlook their darker beginnings – and the terrible run-on effect they had.

While Plunket abandoned King’s eugenics, anti-female education stance and racism early on, other parts of the New Zealand medical system had much longer lasting impacts based on King’s ideas around eugenics. At one point almost 40% percent of all hospital beds in NZ were dedicated to ‘undesirables’ – up to 10,000 at a time – in a system “designed to isolate ‘defective’ members of the community, prevent them breeding, and ultimately strengthen New Zealand’s racial stock.” This system – a programme of state care that could sentence a mildly troubled orphaned six year old to a life of incarceration, continued into the 1990s.

It seems like there’s so much that could be done to educate people about the ideas the beautiful Sir Truby King Gardens were built on. These really fucked up ideas that still impact New Zealanders today – and are even held by some New Zealanders today.