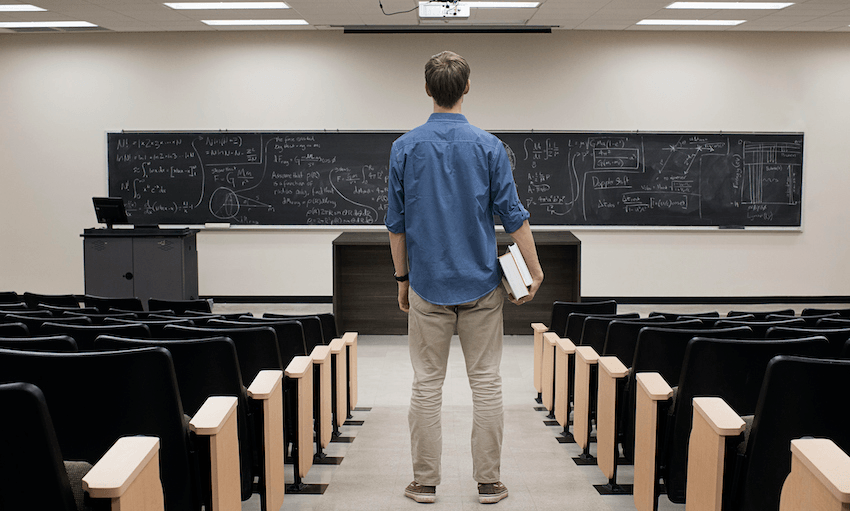 A plea to Victoria University from its tutors: don’t answer Covid with austerity

As universities around the world slash jobs and courses in response to the pandemic, Victoria University of Wellington is signalling its intention to introduce sweeping austerity measures, a group of concerned tutors write.

A response from Victoria University of Wellington is at the end of this column.

So far, 2020 has been a year of non-stop crisis, from bushfires to a pandemic to a global reckoning on race. The next crisis is already here for many: recession. We’re on the brink of the biggest economic downturn in history, and it is going to hurt everyone.

In our corner of the world, at Te Herenga Waka Victoria University of Wellington (VUW), we’re facing huge uncertainty. Tertiary institutions around the world are implementing austerity policies that we, as tutors and early career researchers, are worried will impact an entire generation of students, not to mention our own futures.

This looming threat is nothing new. Tutors and other precarious staff at VUW have for years been dealing with low wages, unpaid overtime and insecure jobs. We’re often the first point of contact for struggling students, but we aren’t supported to take on pastoral care safely and most of us aren’t recognised or paid for it. The university is happy to exploit our care for students as unpaid labour; they know we’ll do this crucial work anyway. We are worried that austerity measures will further compound teaching, learning, and labour issues that have plagued our university for years.

Our university leadership’s response to the financial pressures of the pandemic has so far been vague, so we must look to other institutions for guidance on what to expect. Recently, the science faculty at Massey University axed its casualised staff with immediate effect without any clear plan to handle their workloads. Meanwhile, Massey vice-chancellor Jan Thomas advocated universities “Spotify” students’ learning experience, transforming education into bite-sized, interchangeable chunks that risk sacrificing quality for consumability.

In Australia, the response has been similarly severe. Melbourne’s Deakin University announced it was cutting 400 jobs. This figure does not even factor in casualised and fixed term staff like tutors, whose contracts have quietly not been renewed. At the University of Sydney, casualised employees and courses have been slashed. The history department lost 35% of its second semester courses, including courses on American slavery and antifascism – important subjects in the present political climate.

In response, staff and students have mounted organised resistance against university austerity. A coalition of Deakin staff and students have engaged in a campaign demanding, among other things, financial transparency and that senior leaders take meaningful pay cuts. University of Sydney staff and students staged a socially-distanced protest to demand their vice-chancellor reverse cuts to casualised employees. In the United States, even before the effects of Covid-19 were widely felt, University of California graduate students took strike action, withholding grades because they couldn’t afford their cost of living.

So what does the response to the Covid-19 financial shock look like at VUW? The university leadership’s major response so far has been a hiring freeze, meaning no new staff unless there’s external funding or exceptional circumstances. The rest is still vague. Several voluntary options were proposed, with the clear and vaguely threatening implication that further action might be necessary if staff don’t make voluntary sacrifices. Among other things, leadership has suggested staff use their available annual leave balance, consider voluntary furloughs or blocks of unpaid leave, or adopt a four-day work week – accompanied by a 20% pay cut.

Most offensively, the VC has encouraged staff to contribute to the “staff giving programme”. This programme asks staff to donate part of their salary or wages to “directly support particular areas of the university (e.g. to pay for short-term roles such as tutors, teaching assistants, research assistants, residential assistants and other such roles that might otherwise not be affordable).” Treating those who do essential work at the university like charity cases is insulting.

Given tertiary education’s reliance on international students (and their loss in the wake of Covid-19), the trend of placing more responsibilities on fewer and more precarious academic staff, and the rush to return to surplus, we have no reason to trust that the extreme austerity we have seen elsewhere won’t also come to VUW, threatening jobs and the quality of education. We’re now within days of the end of our contracts for the trimester, and many of us are still in the dark as to whether we will be employed next term.

Let us be clear: the issues with compensation, insecurity, and lack of support outlined above will be exacerbated by new austerity measures, and the impacts on tutors and other casualised or fixed-term staff will disproportionately affect those the university has historically failed to support. Despite making up the majority of tutors and lecturers, less than one third of senior academics are women. Māori and Pasifika scholars are severely underrepresented within our universities, and are often in precarious roles that are the easiest to discontinue. This alone is reason to question the institution’s commitment to Te Tiriti o Waitangi and its own equity and diversity policies. University leadership must account for the fact that any fiscal decisions they make affecting precarious workers will further undermine those of us who are already structurally marginalised.

Leadership’s enthusiasm for returning to surplus, in the name of saving future generations from financial burden, must not come at the expense of staff and students here and now. Austerity is poison to a functioning education system; it means fewer opportunities for postgraduates, more precarious contracts for tutors who must do more work for less pay, more responsibilities for full-time academics, fewer courses on offer for students, larger tutorials for students, and less contact time with academics. Teaching conditions for academic staff are learning conditions for students. There are better ways to deal with this crisis, and they need to start from a place of transparency and accountability. As our casualised colleagues at Australian National University have said recently, it is the structural inequities in our institutions that have been further revealed by this pandemic, not low cash reserves.

As tutors we have no clear idea what our futures look like, despite our crucial roles. It’s possible many of us will not be here next semester. We’re scared. We’re scared that the university will cut our jobs, or let them quietly disappear, when many of us are already struggling to make a living. We’re scared that courses will be cut and students’ education undermined in the name of saving money. We’re scared teaching will be changed beyond recognition. We’re scared that a period of austerity will leave a scar on this university that lasts for years – already there are concerns that Covid-19 could erase the next generation of New Zealand researchers. We’re scared because leadership seems to be looking at its staff and students as numbers on a balance sheet. We’re scared that Victoria University of Wellington, in its rush to return to surplus, will make decisions that undermine the quality of its teaching and its longevity as a public institution.

We might be scared, but we know that we can get through this if we stand together and support each other. The university has a legislated role as the critic and conscience of society. As such, it should be a democracy, but that is not currently the reality. To that end, we’ve joined our unions, the TEU, VUWSA and the PGSA, and we encourage others to join us. Our voices are louder together. However we as a university manage this crisis, it should be on our terms.

The authors would like to thank Te Aorewa Rolleston, Salient, for their editorial support.

Te Herenga Waka—Victoria University of Wellington acknowledges the critical role tutors play in the education of our students and supports its tutors as valued members of our community. The University has in place policies and guidelines to ensure tutors are properly supported in their roles. The University also runs a training programme for all new tutors, to ensure they are equipped and confident to take on the role, and has partnered with Advance HE to ensure that our best tutors are properly recognised and accredited.  Additionally, a few months ago, senior leaders at the University – including the Vice-Chancellor – donated sizeable portions of their salaries to a fund to support tutors impacted by Covid-19

As the above article acknowledges, we have not introduced the draconian austerity measures adopted at other universities. We have not, for example, “axed casualised staff with immediate effect” but continued to support tutor employment. Of the 1500 tutors hired in first trimester, 800 had their employment extended for an even longer period in response to Covid-19 and not a single one of the 1500 had their contracts shortened. Tutor contracts for second trimester are currently being drawn up and there is no sign that there will be a significant drop in hires. But just in case there is a drop, the University has introduced a tutor hardship fund to provide tutors with financial support over this period of great uncertainty.

The impacts of Covid-19 should not be underestimated. They have been severe; every one of us has been touched by the pandemic. It’s not surprising that our tutors are scared—scared of losing their income and the prospects of a career in education. But the need for tutors – good tutors like those we are fortunate to have at this University – is greater than ever. Our commitment to our tutors is not vague because it has not changed.  Our commitment to our tutors is unwavering. Thank you for everything you do for the staff and students at Te Herenga Waka—Victoria University of Wellington.