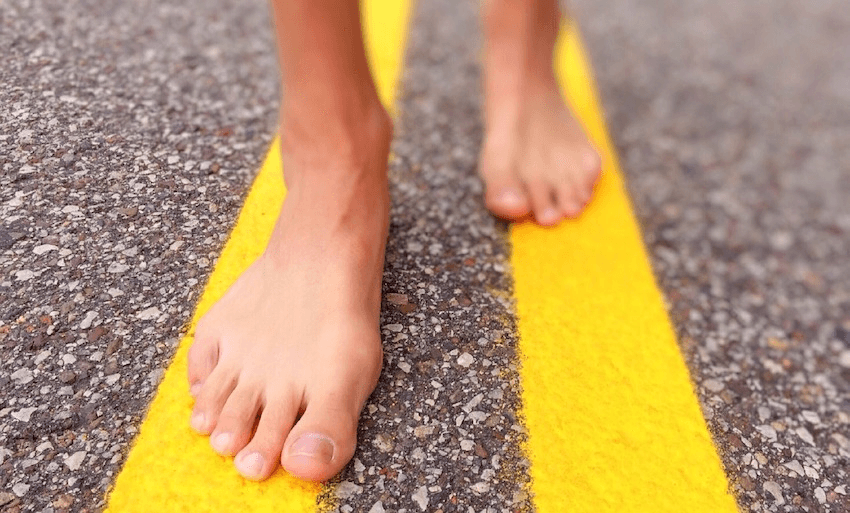 The world may finally be embracing NZ’s most beloved summer tradition: bare feet

There are few things New Zealanders love more than walking around the city without shoes or socks on. And now, just maybe, the Northern Hemisphere is ready to get onboard.

Betteridge’s law states that any headline that ends in a question mark can be answered by the word ‘no’. Though often true, it can sometimes miss the point. The answer may be no, but it can still be illuminating to posit the question, as in the case of an article I was linked to the other day: “Is Going Barefoot The New ‘It Shoe’?”

“I blinked, assuming the feet must be shod in a pair of skin-toned flip-flops, and their owner must be taking a brief pedicure break from the nail salon behind the bus station. Not so, though: the feet belonged to a heavily pregnant blonde woman who was happily yakking away on an iPhone, her legs securely swathed in Outdoor Voices leggings. Everything about her screamed ‘Brooklyn mom catching up on calls between yoga and Whole Foods’, except for the feet she was exposing to the general grime of Vanderbilt Avenue.”

The unexpected sighting of bare feet in “status clog” country, writer Emma Specter suggested, was an indication that the shoe of the coming northern hemisphere summer could be no shoes at all. “There’s something Stevie Nicks-ishly aspirational about tramping around outside in summer, the sun shining on your bare feet; your mind free of anxieties about infection or disease.”

Of course, what might prove a fleeting fashion fad in the US and UK – like tiny handbags and bike shorts as formal wear – is a way of life in New Zealand, where bare feet generally go unremarked upon, even in inner cities. When, six months ago, Rachelle McDonald of Panmure was ejected from Sylvia Park mall for “forgetting her shoes”, some framed it as Kiwi values under threat: first they came for our toes, and we said nothing, etc.

McDonald spent most summers barefoot, she said; it “was a huge part of my Kiwi culture growing up”. Dani Lyons, ejected for the same crime in 2017, said the same thing in her defence: “It’s a Kiwi thing”. Jordan Watson, the How-To Dad, wondered why two women had been thrown out of Sylvia Park when he’d spent 30 minutes there unbothered, his “God-given bare feet … covered in bright red scratches”, and when “women tend to have to have much better looking feet than us men”.

At the time, Watson concluded it was sexism and “stupid city political correctness”; now we know that McDonald and Lyons were simply ahead of their time, much like the Central Saint Martins fashion students I see in Waitrose on my lunch break, who I look to for an indication of what the rest of us will be wearing in two years’ time. (Memorably: a shirt with an identical, smaller shirt stitched on the back. You read it here first.)

The fact it is possible for someone to forget their shoes in the first place speaks volumes about New Zealand’s relaxed way of life, which – if Google search trends for “how to move to New Zealand” after every unfavourable election result are anything to go by – is increasingly the envy of the rest of the world. Far from fashion-forwardness, New Zealand’s national embrace reflects a casual approach to dressing and dress codes, work-life balance, and the public-private divide that more unsettled countries might be hoping to approximate by merely eschewing shoes.

Whether or not bare feet will catch on with the rest of world this summer remains to be seen. Garage’s story has the backing of a boyfriend of a colleague of mine, whose trend-forecasting credentials were cemented when he called the cowboy hat way back in October – but my sense is that if it were about to take off in London, I’d have been stepping on Central Saint Martins students’ bare toes in Waitrose in summer ‘17.

Will I, personally, be going without shoes? This time, I can point you to Betteridge’s law with confidence.