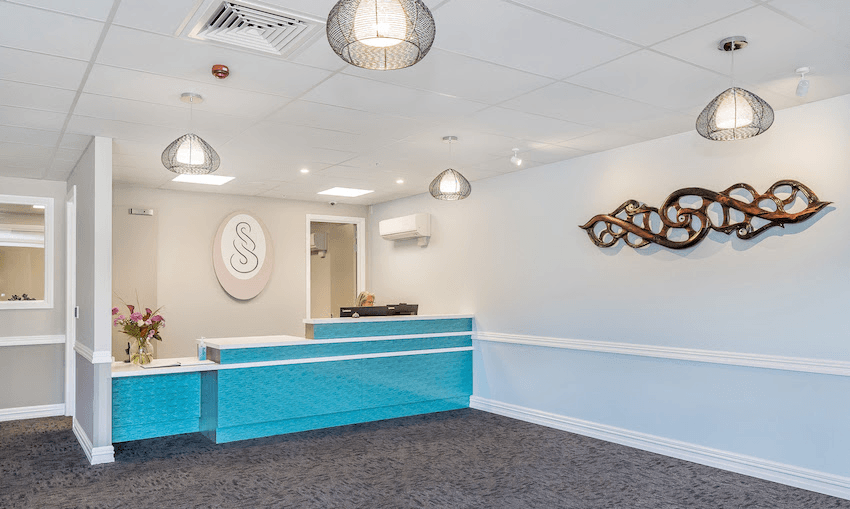 The closure will leave the entire Wellington region without any non-hospital birthing facilities, Emily Writes reports.

The state-of-the-art Te Awakairangi Birthing Centre at Melling in the Hutt Valley is set to close at the end of September due to a lack of funding, staff at the 12-bed centre were told yesterday.

The centre has been running for just three years.

Midwife Amy Taylor said it was a devastating blow not just to the pregnant population but to midwives who work at the centre.

“It’s such a terrible shock. I have clients due up until March who are expecting to give birth at the centre and it’s closing next month.

Pushing birthing people onto an already overstretched hospital service was dangerous, she said.

“There are so many reasons people need to be able to birth outside of a hospital environment. Many of the clients I work with have a history of previous traumatic birth, mental health challenges, neurodiversity and other reasons why the hospital environment is especially challenging, despite the hospital midwives providing the best care they can. It’s just awful and so devastating.”

Chloe Wright said she was unable to comment on reports of the closure beyond confirming that management had met with staff and consultation was underway as to the future of the clinic.

“I had a meeting with all the staff and we have put a proposal to them which they have a right to respond to…I can assure you over the last three plus years I have gone to every possible length to work with the DHB and Ministry of Health and I can’t say anything else officially until we get their responses back.”

“Hutt Valley and Capital & Coast DHBs have been made aware of Te Awakairangi Birthing Centre’s decision to consult on the future of its operation in the Hutt Valley Region,” she said in a statement.

“Te Awakairangi Birthing Centre is a commercial business that does not receive funding from the DHB for its primary birthing services. DHB funding decisions are driven by improving equitable outcomes for our population, with emphasis on clinical safety and creating choices to meet the needs of our population.

“We acknowledge the birthing centre’s contribution to providing pregnant people and their families another birthing choice for the Hutt Valley region.”

Melissa Crooks from Upper Hutt gave birth to her first baby at Te Awakairangi in April. She described the experience as “just so wonderful”.

“I am a nurse at the hospital and I know the pressures of the maternity ward at Hutt hospital personally and so I didn’t want to birth there – they’re extremely busy. I also didn’t feel confident birthing at home. Te Awakairangi gave me that other option.”

Despite her birth being “difficult”, Crooks said she loved her experience at Te Awakairangi.

“I was extremely supported by the midwives there. The postnatal care was five star. I don’t know what it would have been like if I gave birth at the hospital but it was just such a wonderful, wonderful time having those couple of days in the centre. I felt like I was the only one there because the staff gave me so much time. I left feeling really confident as a first time mum going home with my baby.”

She said she was devastated at news the centre could be closing next month.

“Women who were planning to use the birth centre will now be forced to use the Hutt hospital service or have a home birth. This will compound the issues at the already understaffed Hutt hospital and also mean women in the Hutt with no risk factors, who had chosen to birth in  birthing centre, will have no choice but to go to a secondary hospital or stay home.

“So women and whanau are losing out, babies are losing out. The closure would not have occurred if the DHB had been prepared to prioritise the needs of birthing women and their whanau, by funding the birth centre,  which is so desperately needed.”

Health minister Andrew Little’s office told The Spinoff in May that maternity care would be one of the focuses of the health reforms announced earlier this year, and a greater investment in community birthing units could be part of the changes under the new regime.

Birthing centres can be used by birthing people of all ages who are planning low-risk births, without intervention. Their lead maternity carer (LMC) midwife who holds an access agreement with the birthing centre will make a booking in advance. Te Awakairangi and most other birth centres are free to all women eligible for free hospital care. As part of postnatal care, birthing people are offered two nights after they give birth. Birthing partners are allowed to stay at most centres; this differs from many hospital settings.

“Birth centres offer a more home-like, less medicalised environment, leading to less unnecessary intervention. [People who give birth there] will also be more likely to have better support from their whanau during their stay, [and experience] a more relaxing atmosphere, better ratios of midwifery staffing so better breastfeeding support, and better access to birthing pools,” Eddy says.

The New Zealand College of Midwives’ consensus statement says those who experience normal pregnancies should be offered the option and encouraged to give birth in primary maternity facilities (birth centres) or at home.

“The evidence clearly demonstrates that women who receive effective antenatal care and are assessed to be at low risk for complications, will give birth to healthy babies and need fewer interventions if they are supported to give birth in a primary maternity unit or at home.”

The potential closure of Te Awakairangi Birthing Centre comes as midwives around the country employed by district health boards have been taking part in rolling strikes.

Next Thursday there will be 12-hour strikes across all district health boards if the pay dispute with hospital midwives is not resolved.

A final decision on whether Te Awakairangi Birthing Centre will close will be made on August 24.