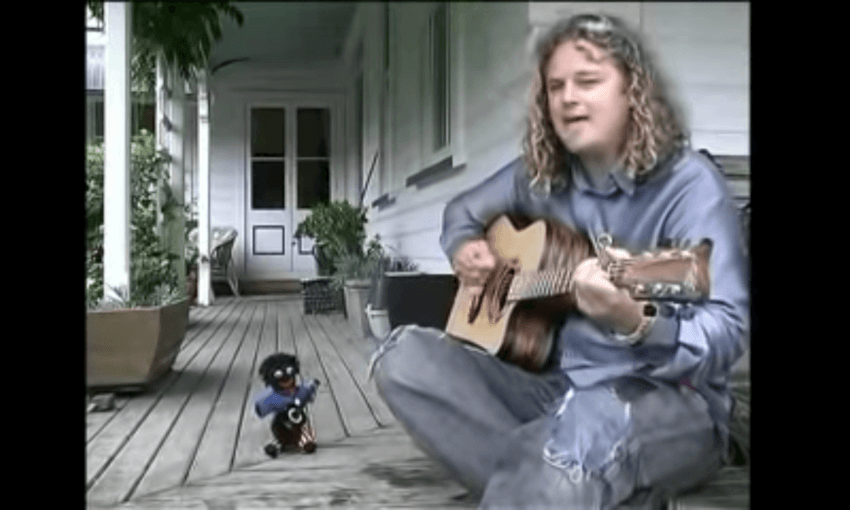 The author of the wildly popular Wonky Donkey children’s book is facing criticisms over a 2008 song about golliwogs.

Craig Smith, author of Wonky Donkey, a children’s book about a three-legged donkey, is facing criticisms over a music video entitled “Gollywog Song”, which was originally posted online 10 years ago.

The video, uploaded to Smith’s Youtube account, shows a woman dressed as the “PC Police” taking a golliwog doll from a child. Smith sings of his childhood spent playing with a golliwog doll, arguing that he loved the doll not for its colour or race.

“I just like his real cool hair
and smile across his face.
If they can make white dolls
Then why can’t they make black?
Raise your voice and shout out loud
Bring the golliwogs back”

Smith goes on to sing about political correctness.

The song finishes with Smith summarising his thoughts on the matter.

The song, which features on the same album as The Wonky Donkey, which remains still available for purchase, has come to light after Smith announced multiple children’s shows around the country. He will play four shows at Eastgate Mall in Linwood, Christchurch, across the road from the Linwood mosque, and is set to perform at Te Papa as part of the national museum’s school holiday programme.

The issue has been discussed across multiple online parenting groups, leading to a number of women calling the venues, including Te Papa, to complain about the appearances. They say they were told that he would continue to perform as he no longer plays the song in public.

When approached for comment by the Spinoff, Smith said he would not be performing “Gollywog Song”. “I have never performed this song at a children’s show. I have not performed this song in general for over 10 years and will not again heading into the future.”

He said: “I understand that people have genuine concerns about the song. I never intended to offend anyone in fact the intent was as an anti-racist song.”

The debate around the racism implicit in the idea of the Golliwog has rumbled for decades, most recently when it was discovered that a Waiheke shop owner was continuing to sell them. While some believe them to be a harmless children’s toy, others believe they are “symbols of racism and bigotry”.

One member of an online group for feminist mothers said she was disappointed in both the song and Smith’s reaction to criticisms in exchanges with members who had complained. “He hasn’t been open at all to listening to why that song might be wrong or dangerous,” she said.

“My kids can hear a radio jingle once and sing it over and over again without even knowing what it is. Children’s performers have a responsibility to model positive messages. ”

After a video of a woman reading The Wonky Donkey to her grandchild was viewed millions of times in 2018, Smith’s most popular work experienced a global spike in sales, reaching No 16 on Amazon’s global bestseller list. New Zealand publisher Scholastic will be releasing a sequel to The Wonky Donkey in November.

Scholastic’s head of publishing, Lynette Evans, did not respond directly to questions put to the publisher by the Spinoff, but provided the following comment: “Craig offered Scholastic the Golliwog Song several years ago and we declined to publish. This is the first I’ve heard of it since.”

Smith said he has “removed links to it from all digital platforms that I can.”