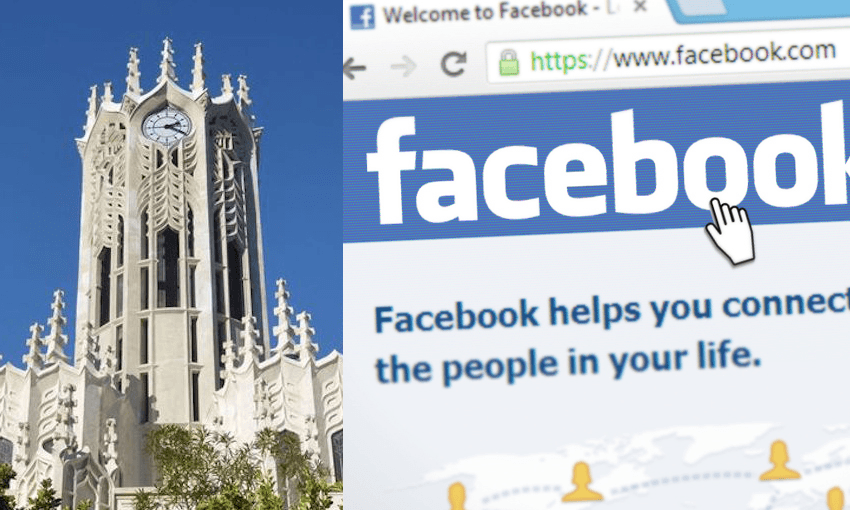 Staff members have been keeping a record of the University of Auckland’s online mentions, writes Daniel Meech, co-editor of student magazine Craccum.

Documents released under the Official Information Act show that the University of Auckland has been tracking students on social media for several months. The university appears to have used this information to gain an insight into how students were reacting to online learning, and how students would react to new information from the university. The documents also suggest a university employee may have anonymously posted on student media sites more than once to stimulate discussion and provide information.

The university recorded student activity on social media in a Google document which it updated throughout the year on an almost-daily basis. It made note of articles and posts which were “snippy”, and recorded how students reacted in the comments section to various pieces of information and news.

For the most part, student names were not recorded in the document. However, the document did name some students, and several notes included links to student profiles on social media websites such as Instagram. Screenshots of some posts were also taken. No effort was made to remove the names of the posters from these screenshots. The document also directly quoted students who commented on posts and articles online. Although the quotes in the document were taken anonymously, Craccum was able to find the names of several people quoted by searching for the quote on the Facebook page from which it was taken.

The notes taken were very basic at first. The first note in the document (taken on March 30) did not mention any of the student media pages by name, except for AUSA, and commented very generally on how students were reacting to online learning. It was around 180 words long.

However, as the year went on, and the university began monitoring more and more social media pages, the notes became more detailed. By early September, the notes were around 800 words long. Each note contained several hundred words on individual student media pages – Craccum, AUSA, UoA: Meaningful Confessions, Reddit, and more – and comments from students were often grouped together by topic (eg posts and comments to do with graduation, exams etc). Notes frequently included links to memes made by students and information about seemingly irrelevant posts – among other things, the document analysed Craccum erotica articles, anonymous posts about the price of muffins, posts about the benefits of having a Sugar Daddy, rap videos published by lecturers, TikTok videos made by students, an article published about making money through OnlyFans, and more.

One note left on May 13 suggests that the university may have done more than simply monitor online student media. It suggests they might have been posting anonymously online to stimulate discussion and provide information. “Started a Reddit post on being pre-med,” it reads. “No comments yet, 20 upvotes”.

Craccum was able to find that Reddit post online. “Noticed that every second post here is something to do with medicine at the University of Auckland, so I made a new subreddit which is specifically for discussion of anything premed,” the post states.

The person taking notes also occasionally passed judgement on various posts, comments, and articles. In a note made on March 31, they said they were generally happy with Craccum’s latest edition, but didn’t like the article about flirting over Zoom. In a note from May, they noted they’d found a “very strange erotica style article” in the latest Craccum. The article they described featured a student having sex with their online exams. In another note, the person monitoring online media said the Law Society Meme Page was “fun” and “going strong”. On the other hand, they thought the university hall confession pages – which they had only just found that day – were irrelevant and not worth tracking.

The UoA: Meaningful Confessions “dumpling war” features in notes made by the university, as does the “ongoing saga” of “the punch in Albert Park” (“there was no conversation about a wallet and she takes back the apology,” one note reads). Memes about Dawn Freshwater, Ashley Bloomfield, Stuart McCutcheon, Covid-19, the university, and more appear linked within the document. TikToks about the university are commented on, as is a Craccum article about making money through OnlyFans (a “porn site”, as the person reading the article noted). Videos made by bloggers about the university are linked within the document, as well as a “funny video of a rap by Professor Roger Booth”.

Craccum is hopeful this article will appear in the document too.

Update: a spokesperson for the University of Auckland has responded to Craccum’s article:

“We know that students communicate about and respond to issues via social media and this is one of the ways the University listens to the student voice and gets a sense of the student sentiment in real time.

“There is nothing unethical about this. We are collating views that have been posted on public channels and we are using it to understand the views and sentiments of students on important issues.

“We aren’t taking note of any individual students but are observing themes, sentiment and vibe of the student body.”

This story originally appeared in Craccum.