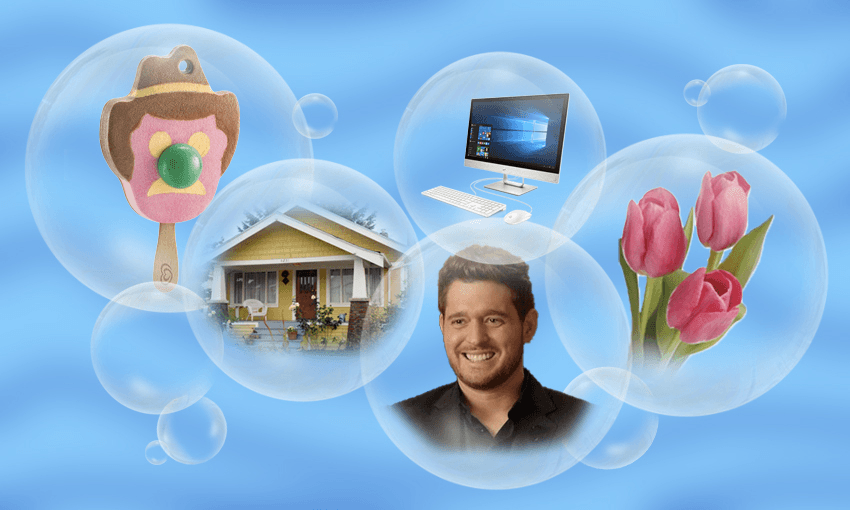 Bubbles nearly as good as the trans-Tasman bubble, ranked

This time next week, we will be a bubble of 30 million. That’s a big bubble. But is it the best? We rank other impressive bubbles through the ages.

The trans-Tasman bubble is a big one, but we’re determined not to pop it. This could be the best bubble we’ve seen in years – even bigger and better than the Bubble Shooter game craze of 2005. New Zealanders and Australians are about to experience the strongest kinship we’ve had outside of a war. The bubble is both ideological and physical progress all in one, and we love it.

To celebrate our union (the number one bubble), we’ve ranked all the bubbles below it.

Definitely my least favourite bubble. The surface tension is kept low by the soaps of high demand and inadequate regulation. Will it ever burst and get current homeowners all wet? Only time and Megan Woods will tell.

A bubble that keeps spiders alive, which I hate. The diving bell spider takes absolute liberties with its environment and creates bubbles of air underwater so it can breathe and eat, instead of just living on the ground where I can see them. Nature is wonderful, but this is a perversion.

In this episode of Seinfeld, Susan and George attempt to murder a child.

Just over a year ago New Zealanders learned what a Covid-19 bubble was, and that they had to stay in it. “Where you stay tonight is where you must stay for now on,” said the emergency alert we all got. Yes, this is better than the housing bubble. I would rather be trapped inside for two months every year than never have a place to call my home.

I don’t know what it is, but I don’t like him. When he was a child he went by the name “Mickey Bubbles”. Apparently as a teenager he prayed over his Biblé to become a singer, which implies “Mickey Bubbles” existed years before he stepped foot on a stage.

Name a more iconic duo than tulips and the black death. You can’t. First, the plague whips the Dutch up into a fatalistic luxury goods-buying frenzy, then it stops people from attending tulip auctions by covering their bodies with buboes and gangrene. This led to the first asset bubble in recorded history, and started us on the path to GameStop. Imagine being the guy who paid 2,500 florins per tulip bulb. You could get 83 pigs for that!

Not a great drink, but a fun one.

Jake Gyllenhaal lives in a zorb. These are two of my favourite things.

Every 10-year-old’s favourite ice cream. Before 10, it’s too difficult to eat a deformed cowboy face without either being scared or choking on its nose; after 13 you grow up and move onto Memphis Meltdowns. His flesh is deep pink and sometimes his jowls don’t sit right, but we loved him all the same.

More than 300 professional basketball players and their families were trapped inside Disney World for the final eight games of last year’s NBA season. No-one in or out of the Mickey Zone. The games were watched by Microsoft Teams screens, injury numbers increased, and one assistant coach called it “the worst schedule I’ve seen in 25 years” – but no-one got Covid-19.

When my intermediate school banned Bubble Shooter we all learned what VPNs were overnight. It’s true what they say: once you pop, you just can’t stop.

Bubbles is described as a “common chimpanzee”, but he isn’t. He is so, so rare. Only two other chimps can claim to have done chores at Michael Jackson’s Neverland ranch. Bubbles was bred into a medical testing facility, which is a terrible start to life, and in adulthood he become aggressive. Rumour spread this was because Prince had used ESP to drive him mad. Bubbles has chilled out a lot but is described as his keepers as “huge and ugly”, which is extremely mean. Justice for Bubbles.

All the fun of bubbles without any of the tragedy of popping. Watch your bubble slowly shrivel in the sun like a fruit, or a person.

In the latest episode of Remember When…, we pay tribute to the most practical school shoe of all time, the Rugged Shark. Subscribe and listen on Apple Podcasts, Spotify or your favourite podcast provider.