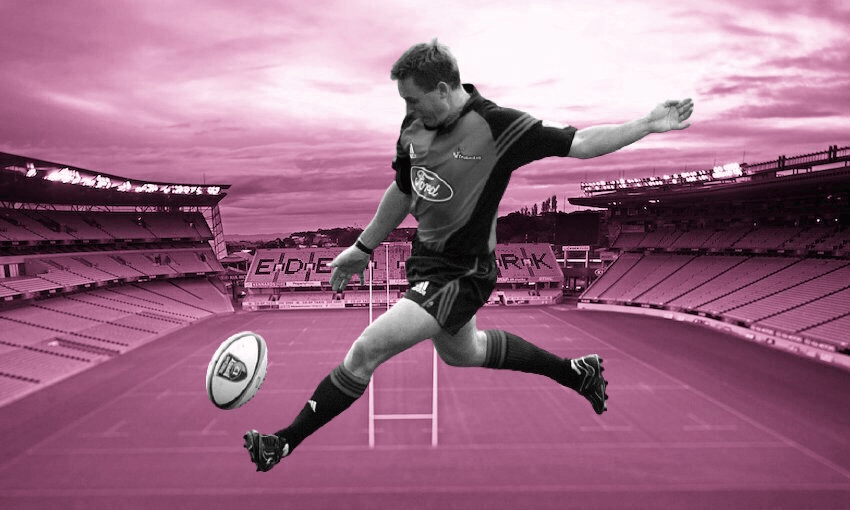 Andrew Merhtens, one of the best Kiwi proponents of the drop goal (Image: Getty Images/Leonie Hayden)

In defence of the drop kick

If you’re unsure what I’m referring to, it’s the night the All Blacks inexplicably lost to France in the 2007 Rugby World Cup quarter-final – yes, the quarter-final!

I have buried the memories of this particular day so deeply I can’t even remember where I was when we lost. All I can recount is a numbing sense of emptiness that lasted so long, I didn’t watch another game for almost 13 months.

Apart from a missed forward pass by referee Wayne Barnes (endlessly replayed on this video), the key reason this seemingly invincible team lost was it chose not to kick a drop goal, until Luke McAllister made a rushed, desperate attempt at the 79-minute mark from halfway.

Such was the opprobrium following the loss, the NZRU conducted a full review and reached this view in their conclusions: “We recognise that in the last 10 minutes of the second half, the All Blacks faced a dilemma. Whether to go for a drop goal or whether to continue to score through a try or a penalty. The coaches sent out a message with 10 minutes to go to set up for a drop goal. The on-field decision was made to continue with attempting to score a try or get a penalty. The players were unaware of a vital piece of information, that the All Blacks had not been given a penalty in the entire second half and were probably unlikely to get one.”

The callous hopelessness of that final sentence almost renders me a withering mess. And therefore, with this traumatic memory deeply etched into my soul, I was psychologically triggered on Sunday as I watched both the All Blacks and Wallabies play out almost nine minutes of overtime without one side going for a drop kick.

But before you file an injunction against The Spinoff, this column isn’t a criticism of the players on the weekend. Rather I’m questioning the general reticence towards the drop kick that’s developed across New Zealand rugby. And I hope by airing my frustrations, we can get a conversation going about the need to return this form of scoring to the arsenal. In fact, I would like to go as far as arguing that we must re-embrace the drop goal as a thing of beauty, not as the object of scorn when performed by some toffee-nosed Englishman. In recent history, the best Kiwi proponent of the drop goal was probably Andrew Mehrtens, and despite being a Blues fan, I can grudgingly admit that one of his droppies had an almost poetic artistry to it.

Despite looking only 12 years old and suffering from crippling food poisoning, the plucky Cantabrian almost drop-kicked New Zealand to World Cup victory in 1995 with his enormous altitude-induced missiles.

But arguably his most famous drop kick came for the Crusaders, where, after effortlessly chipping the ball through the posts with his trade-mark timing and choir boy haircut, he then broke with his cherubic demeanour and gave the crowd the ultimate single-fingered salute.

Perhaps if we take Mehrtens’ example, the key to re-popularising this means of point scoring is to also encourage players to follow up their successful kicks with outrageous celebrations. Given our star players’ love of social media platforms such as Instagram and TikTok, maybe the NZRU could create a new dance trend, with the help of Jawsh 685, that encapsulates the taking of a drop kick?

Whatever it takes, the time is well overdue for our nation to come to terms with our dissonance towards the dark art of kicking a ball through a set of rugby posts during open play. Instead of recoiling from such individualistic pursuits, every coach and rugby-obsessed parent needs to patriotically take up this cause, and impress upon their young charges the need for the religious practice of drop kicks.