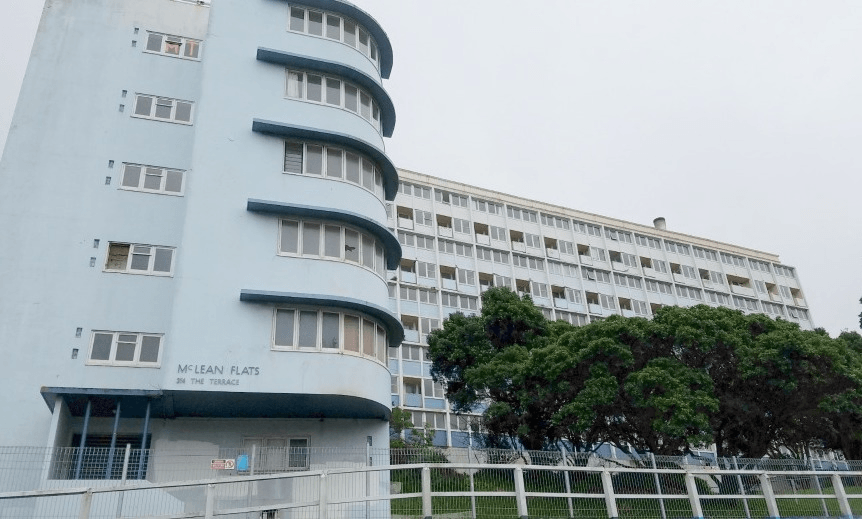 Ghost flats: The battle for the Gordon Wilson Building

Buildings in Wellington that once housed almost 150 people have lain empty for five years, even as an intensifying housing crisis has rendered 40,000 Kiwis homeless – including hundreds of Wellingtonians. How did it happen? Marc Daalder explains.

In 1959, as construction of The Terrace Flats in Wellington neared completion, the building’s architect died. His name was Gordon Wilson; the 87-unit complex, rechristened in his honour, opened later that year. The huge Gordon Wilson building has loomed over The Terrace ever since, but a series of controversial lawsuits, rezoning permits, and construction delays have meant that both it and its neighbour, the smaller McLean Flats building, have sat derelict since an earthquake assessment found them dangerously unsafe in 2012.

While major city institutions like Victoria University and the Wellington City Council pursued profits and the gain of strategic land assets and the government dithered in the face of the housing crisis, the rehabilitation of these housing units was for the most part dropped to the side of the road.

There were valid reasons for emptying the buildings in the first place. The Housing New Zealand earthquake assessment noted “that a large person falling heavily at a critical location would provide a sufficient force to dislodge elements” of the Gordon Wilson building’s façade. The 131 residents of the Gordon Wilson flats were evacuated in just seven days in May 2012 and sent to a variety of locations around the city.

After lying dormant for two years, the building was sold to nearby Victoria University in 2014 for $6 million. Wellington Central MP Grant Robertson says this decision to sell by Housing NZ was misguided. “My view is Housing NZ should never have sold it. They are the ones who should have been saying at the outset, even in 2012, ‘Actually we’re going to need this site for social housing’.”

This is especially important in light of what Robertson calls a “chronic shortage of housing in Wellington. We’re probably about 3,500 houses or places short.”

The university, however, had no intention of converting the flats into accommodation of any kind. Instead they embarked on a plan to demolish the building and replace it with a pedestrian walkway connecting the university’s Kelburn campus with the centre city.

The purchase’s main purpose, though, was as “a strategic land banked asset […] for some yet unidentified Victoria University purpose,” according to a court ruling on the matter (more on that later). The university declined to comment on the record for this article.

In order to fast track the demolition of the Gordon Wilson flats, Victoria University and the Wellington City Council worked in 2016 to remove the flats from the city’s District Plan Heritage Listing and to rezone it from “Inner Residential” to “Institutional Precinct.” In response, the Wellington Architectural Centre sued the Council and university, arguing that the building had heritage value and shouldn’t be delisted or demolished.

In explaining the Centre’s decision to appeal, president and treasurer Christine McCarthy told The Spinoff that members were concerned with more than just the heritage status of the building. “The concerns that members raised then were related to sustainability, the need for housing, and the building’s heritage.” However, “Because the plan change did not directly authorise demolition and did not prevent Victoria University from retaining the building as housing, we could not challenge the decision on the other grounds of concern to members (like sustainability and housing).”

That doesn’t mean heritage wasn’t still important to the Centre, and to many of those who made submissions in defence of the building. The Gordon Wilson flats represent just one of two modernist and brutalist public housing complexes built under a post-war government that are left in New Zealand. Although the building has been abandoned for five years and its towering façade looms over (and clashes with) much of the Terrace, the Architectural Centre believes it should be listed as having significant and not moderate heritage. The Centre responded to critics in September with a piece entitled “Can ugly buildings be heritage?”

On August 10th, after a year of filing and months of deliberation, the Environment Court concluded that they could, in a 2-1 decision that sided with the Architectural Centre. “It is our view that the Gordon Wilson Flats [have] significant heritage value and therefore should not be delisted,” the two majority commissioners wrote. On the issue of rezoning, the Court called for further submissions from the parties involved.

Victoria’s plans have not been entirely foiled however. The university can still appeal the Environment Court’s decision if it wishes, or could decide to convert the building for an academic purpose. Indeed, it could still demolish the building, but the resource consent involved would be much stricter and much more difficult to attain.

Although Victoria may reconsider, it seems unlikely that the flats will be used for housing. In documents filed with the Environment Court last year, the university wrote “The building does not provide, and cannot be adapted to provide, the type of student accommodation in demand, which is fully-catered, dormitory style accommodation for first-year students.”

The city council is similarly uncertain as to what comes next. Deputy Mayor Paul Eagle told Stuff after the decision was released that “The council will be looking closely at the ruling to see where we go from here. We’ll be talking to the university and working closely with them to progress the next steps.”

On the other hand, McCarthy says “that ideally the building should be used as housing. There is a clear need for this. It could, for example be used for postgraduate accommodation. We don’t think demolishing and landbanking this inner-city property for 20 years is an appropriate use, especially in this time of housing shortage.”

The Environment Court agreed, writing in the majority opinion that “It seems to us that in a time of apparent scarcity of social housing in Wellington and the increase in the level of homelessness reported in the media that great care should be taken before demolition.”

Thus, the future of the Gordon Wilson flats remains unclear. Their smaller neighbors, the McLean flats, appear to have a slightly more certain outlook. Housing NZ released a plan in mid-2016 calling for the redevelopment of the flats into 34 one-bedroom units, up from the 16 people they used to house. Construction was intended to begin in early 2017, but nothing was heard until June of this year when the approved plans were re-released by the government as part of a broader plan to add 140 units to the city.

But, according to MP Grant Robertson, “That only just covers what was lost [when the Gordon Wilson and McLean flats closed in 2012], let alone the additional need.”

A Housing New Zealand spokesperson told The Spinoff that redevelopment work had been put on hold while the outcome of the Gordon Wilson case was decided, “as some of the work relating to easements would be determined by the potential demolition of that building. As this now looks to be further delayed, Housing New Zealand will be slightly altering plans and beginning redevelopment work on McLean soon.

It’s hard to imagine that anybody suspected exactly how long the flats on the Terrace would remain empty when they were evacuated in 2012. Now, they will linger on in this abandoned state until mid-2019 at the earliest, even as the housing crisis in New Zealand intensifies and some one percent of the population is estimated to be homeless.

Gordon Wilson will likely stay empty for far longer than that as litigation and permits and rezoning scraps continue. Meanwhile, in March a pair of graduate students at Victoria made headlines when they spent the night in the library because they had nowhere else to go.