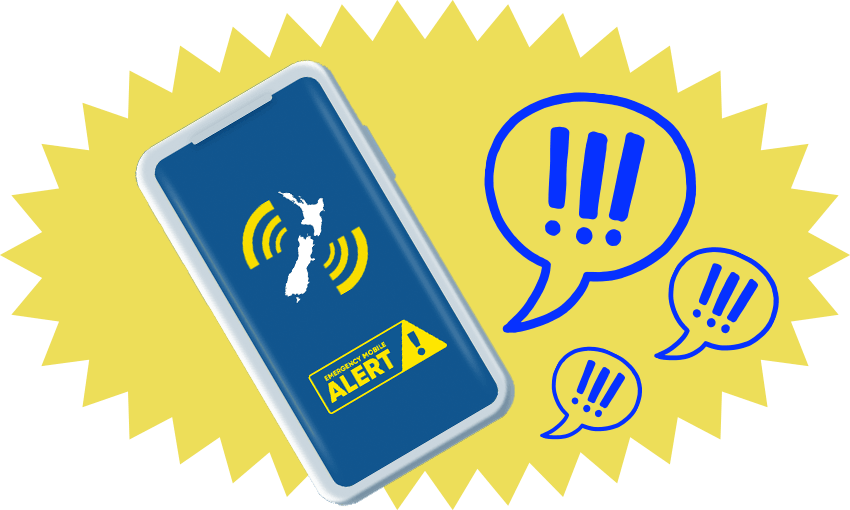 On Sunday evening mobile phones nationwide will ring noisily as if an emergency were happening – a test-run for when the real deal unexpectedly hits. But how does it work and can you opt out?

Between 6 and 7 o’clock tonight, your cell phone will spring to life, emitting a loud noise as an alert is broadcast nationwide: “This is a test message for the Emergency Mobile Alert system. No action is required. Sent by [User Agency name]. Visit civildefence.govt.nz for more information about Emergency Mobile Alert.” It’s the kind of alert that,during an actual earthquake, a manhunt or even a pandemic, could mean the difference between keeping safe and being at risk of serious harm.

Don’t worry though – barring any actual emergency freakishly occurring in that very hour, it’s just the National Emergency Management Agency (Nema) testing what’s known as the emergency mobile alert system. “The nationwide test is a way to check our systems, the cell towers and your phone’s ability to receive an emergency mobile alert, so we have confidence it will perform as it should in an emergency,” says Gary Knowles, director of Civil Defence Emergency Management.

A disaster preparedness survey from 2021 found that 90% of New Zealanders either received an alert or were near someone that did last year. Knowles expects a similar proportion to receive an alert on their phone during tonight’s test. For people who have endured, for example, the severe flooding that hit Westport and the Buller District earlier this year, Sunday’s test alert will be just the latest in a series they’ve received. For others, it’ll come as a surprise. Here’s everything you need to know about the emergency mobile alert (EMA).

So who presses the send button?

The following government agencies are the only ones authorised to send alerts:

The 16 local civil defence emergency management groups, responsible for emergency management in their areas, are allowed to send alerts too. Nema is the system’s “custodian”, responsible for monitoring its use and effectiveness, managing improvements, coordinating meetings and reporting to an oversight governance committee. A protocol agreed to by the agencies establishes that they must use the system “consistently, cautiously, and effectively” in an emergency, and they must not use it in “any way which is unlawful or fraudulent, abusive (eg, spamming any person or group of persons), or contrary to any written directions or instructions” from Nema. An alert message will identify the agency sending it.

What circumstances trigger an alert?

Besides scheduled test alerts, agencies will press send only where there is a serious threat to your life, health and property. Natural disasters are the first that come to mind – earthquakes, volcanic eruptions, tsunamis, wildfires and floods – but terrorist attacks, armed offenders at large, seriously contaminated drinking water or outbreaks of a deadly virus can count.

At the same time, any authorised agency has to judge whether an alert is appropriate. The protocol states that agencies will issue only “high-priority alerts”. Some criteria, such as how certain and severe the emergency is, and how urgent the response must be, help guide that decision, especially where the information available is incomplete or there’s some doubt about the situation. Other considerations include whether the public would expect to receive an alert or they feel “over-alerted”. And sometimes, an alert might be issued where it doesn’t qualify as a high priority – including where it’s important to keep communication lines open with affected areas.

How does the system work?

Depending on the nature of the emergency, the most relevant authorised agency will lead the response by determining which areas are affected and then creating an alert. Targeted cell towers will then broadcast the alert to affected areas, using a dedicated signal that is more reliable in an emergency, especially when increased traffic overloads telecommunication networks. In some cases, people who are actually safe may also receive the alert. The EMA protocol states it is preferable to “over-alert” a target area because a precise boundary is not achievable in cell broadcasting.

Neither. All you need is a mobile phone capable of receiving an alert. For Apple users, devices running on iOS 11 or later, or those models no earlier than the iPhone 5s, are capable. For Android users, a range of brands will receive the alert. Make sure your phone is switched on and that your operating system is up-to-date. Unlike text messages, emergency mobile alerts are secure and don’t need recipients’ private details, and they don’t use your phone number or collect information about you. However, you can’t opt out of receiving them as they are designed to keep you safe in emergencies.

Does the emergency mobile alert system replace other channels of communication?

It’s a vital channel to keep New Zealanders safe and informed in an emergency, but it doesn’t replace other existing communication lines such as TV, radio, social media, local civil defence groups or your own intuition. In many cases, people will receive alerts via more than one channel, which makes sense – no form of technology is completely failsafe, says Knowles, the Civil Defence Emergency Management director. “If you feel your life is in danger, don’t wait for an official warning. Remember – if an earthquake is long or strong, get gone.”

What language is an alert written in?

Only English. As the EMA is an additional line of communication, people whose first language isn’t English can and should still rely on other channels, especially ethnic-specific broadcasters or social media community group pages. In 2017, Nema signed memoranda of understanding with radio and TV broadcasters to help disseminate information in the event of an emergency.

I’m part of the sight and hearing-impaired communities. Does the system include me too?

If your mobile phone has accessibility features that meet your needs, then you should be able to receive an alert. Deaf and hearing-impaired New Zealanders have recently been able to access emergency preparedness information through New Zealand Sign Language (NZSL) translation videos. Nema and Deaf Aotearoa launched the translations during NZSL week earlier this month, across getready.govt.nz, the agency’s website to get people prepared for emergencies. Its information is also available in audio, large print and “Easy Read”, a type of communication using clear, easy-to-read everyday words, bolstered by images and pictures.