Georgia O’Connor spent her adolescent years battling chronic pain with no apparent cause. Many of the one in 10 women with endometriosis have similar struggles before being diagnosed – and it’s not good enough.

I was 18 and lying in a hospital bed post-surgery when I was finally given an answer to seven years of pain: endometriosis. I remember the sigh of relief. Like many people, I had never even heard of endometriosis, and I had no idea I was being signed up to what now feels like a life sentence of chronic pain.

I had my first period when I was 11 and every month was excruciating. I would be bedridden for days. I missed a lot of school and had to quit team sports as I was no longer a reliable team player. I had pelvic pain so bad that I would vomit and faint, all while battling the changes of puberty and trying to live out my high school years.

My mum took me to doctor after doctor to try to figure out what was wrong with me. At around age 17, I fell into a deep depression from not knowing what was happening in my body. I had so many blood tests and scans, yet all my results came back normal. “You don’t look sick,” my friends would tell me. But I was sick. I just didn’t know why.

After seven years of no answers, my GP finally suggested going down the gynaecology path, but the public wait for an appointment in my hometown was seven to nine months. I was lucky enough to be able to go private, which I’ll always be grateful for – this is not the case for many other women.

I was left feeling frustrated that investigating endometriosis as a cause for my pain was a last resort. Seven years, the amount of time it took for me to be diagnosed, is the average wait time for a diagnosis for endo in New Zealand.

Endometriosis (endo) is a disease that means little lesions, similar to the uterus lining, grow outside the uterus and on other organs. These lesions can usually only be seen by surgery, meaning endo can only be diagnosed via a surgery called laparoscopy.

One in 10 women suffer from endo in New Zealand, and it presents with a variety of symptoms, the most common being pelvic pain, painful and heavy periods, bloating, painful sex and painful bowel movements, among others. Endo looks different for everyone and symptoms vary; some women can have the lesions but not show any symptoms. 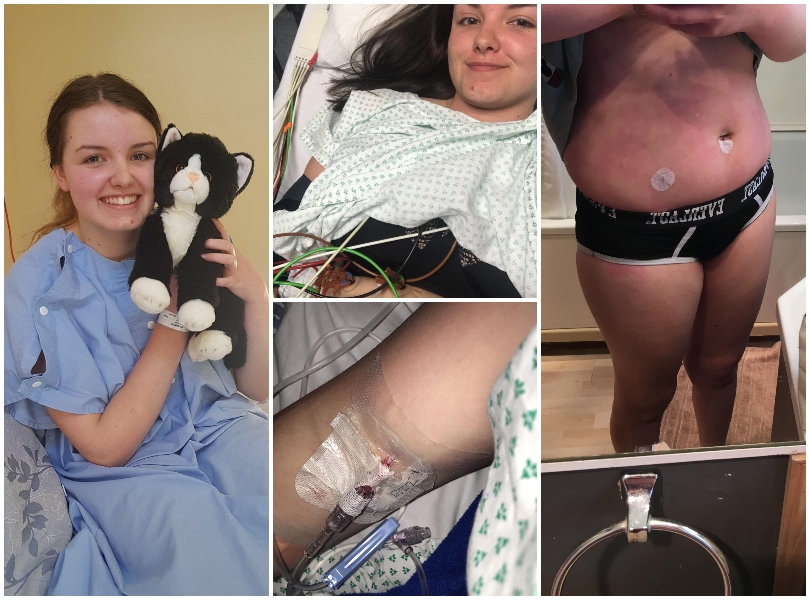 “What now?” I asked my surgeon after he gave me the diagnosis. This is now a question I constantly ask myself. Even though I have my diagnosis, endo has no cure, so for me it’s a long-term management plan. I have had an IUD for four years now and I’ve had two excision surgeries to remove lesions and drain cysts. I go to multiple medical appointments every week, but my pain is still persistent. I’m now starting to realise that pain management comes from all areas of life, and is connected to both my physical and mental wellbeing.

I’m now 21, and I can honestly say I never thought I’d be able to complete the three years of university study I have done so far with this crippling disease. I’ve had many obstacles. Last year, I couldn’t sit an exam (I study law and arts) because I was bleeding from bladder surgery two days prior. I had to fight to be allowed to resit, initially being told by a university staff member that my excuse was a “woman’s issue”. That’s something I’ve had to fight against for years. Excruciating periods are not normal. They are not just “women’s problems”.

I’ve become a dedicated advocate for sufferers of my illness, something I think stems from my legal study, but no women should have to explain to anyone, let alone a man, that a crippling chronic illness greatly impacts study and regular day-to-day activities. This illness does not just affect physical activities – it can have a huge impact on mental health as well.

I constantly feel like a burden to those closest to me. Asking for help is hard, as it feels like admitting defeat. I have lost friends and relationships because of this illness, mainly from a lack of understanding as to why I’ve cancelled a coffee date for the tenth time. They don’t understand that I’ve said no because I’m hunched over on the floor of my room in tears. It’s lonely to fight pain everyday from the minute you wake up. It feels like a constant battle.

If there is one positive thing I can take from having endometriosis, it’s that it has made me incredibly strong. It might create obstacles to work through, but I can still live a fulfilling life and achieve my goals. Pain management for me looks less like surgery and constant medical attention and more like sunny walks, meditation and mindfulness.

I am part of the one in 10 but I am stronger for it. Please know that excruciating periods and any of the other symptoms mentioned above are not normal. I know us women are strong, but seek help if you have experienced anything similar. There are many amazing resources online. Lastly, be kind to all the amazing women in your life, because any of them could be the one in 10.