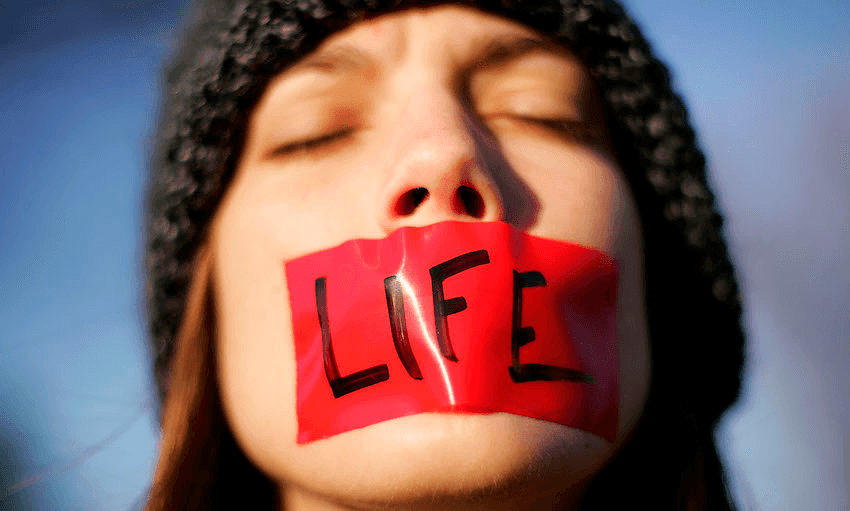 Men need to put aside their discomfort and support New Zealand women in the wake of Alabama’s abortion ban, writes Zoe Deans.

Kiwi bloke stoicism hasn’t really equipped anyone to deal with outpourings of pain. And right now, it’s all around. Your friends, your wife, your workmates, your sister – we’re shocked, scared, furious, hurt and bewildered by Alabama’s horrifying new laws that effectively ban abortion.

The recent ruling in Alabama – and similar ones in Ohio, Missouri, and Georgia – are terrifying reminders of just how fragile our right to bodily autonomy is. And though it’s far away, it hits close to home. Here in Aotearoa, abortion can only be accessed legally if the pregnant person has sign-off from two doctors. Getting an abortion in New Zealand remains a palaver of appointments and approval-seeking which, contrary to what Alfred Ngaro says, many women find stressful, intimidating and exhausting.

There’s been an eerie silence in the conversation, though. Men have been conspicuously quiet about the abortion ban. I get it: it’s hard to know what to do. The men I talked to said that they found it difficult to know what to say about such an emotive issue, or feared that speaking out about the abortion bans might bring up painful emotions. Some weren’t sure it was their place to say anything at all.

Beneath their top-level discomfort, these men had a deep desire to be better at empathising with and supporting women in the wake of Alabama’s abortion ban. It’s critical that they do. The right to choose when and how we have kids affects all of us, and access to family planning is crucial in affording women dignity and control over their lives.

What you do now matters. Not only for the women in your life but for the movement for reproductive rights everywhere. This is your fight too.

My dudes, you need to put aside your discomfort and take action. Here’s how.

1) Take responsibility in the bedroom

This one goes without saying, but it takes two people to conceive. Do your part by ensuring you not only carry condoms (and check the expiry dates), but you offer to use them as a default. Respect women’s birth control choices and never pressure women to have unprotected sex or to change their contraception method for you – no whining, pleading, rolling eyes or sulking. Offer to help pay for your partner’s contraception. Some of the most reliable long-term options still aren’t publicly funded and can carry a hefty price. If you’re done having kids or just don’t want them, consider a vasectomy.

Listen to, read or watch women’s lived experiences of seeking abortions in Aotearoa. Offer support to loved ones who have had an abortion and might be feeling especially hit by the news from Alabama. Ask what they need and listen without offering solutions, unless those are asked for. The voices of the people most impacted by abortion bans must remain at the core of this conversation. Re-share videos and articles by women and advocacy groups on social media.

3) Speak out about your own experiences with abortion

Almost a third of women in New Zealand will have an abortion in their lifetime. A lot of men have already supported partners, friends or family members through abortion. It can be distressing, difficult and sad, but it can also afford you and your loved ones the chance to choose when you start a family. It’s important to be vocal about it (with consent and prior discussion with the person who had the abortion).

4) Educate yourself about anatomy

One of the most shocking things to come out of this whole Alabama debacle is the sheer willful ignorance legislators have shown about women’s bodies. This is not some harmless bumbling, it’s actively dangerous. It leads to misconceptions (not a pun), like the idea that a woman’s body can “shut the whole thing down” and not get pregnant during rape, therefore justifying abortion bans. Revisit the heady days of third form health class and read about how uteruses work (just don’t be the guy who tried to mansplain vulvas to a gynaecologist).

Abortion in New Zealand is still in the Crimes Act 1961, but it doesn’t have to be. We can change the laws, and it’s a good time to act. Parliament is currently considering recommendations from the Law Commission on legalising abortion. Sign a petition (or two), email your local MP, phone your representative and let them know this is an issue for you. Meet with an MP and tell them your story. Publicly call out anti-abortion politicians – they need to know their views aren’t tolerated and they don’t have a platform. Make sure you know the parties’ policies on abortion and vote accordingly.

If someone in your life is having an abortion, ask how you can support her. Offer to drive her to and from her appointments, cook her dinner, look after her kids, run errands, or stay with her after the procedure if she needs help or hugs.

7) Put your money where your mouth is
If you played a part in the conception, pay for part or all of the abortion. Remember that abortions can cost women in other ways: it’s not just the price of the procedure, but the time off work, extra childcare, fuel money and doctor’s fees.

8) If you’re an employer or manager, be sensitive around any loss of pregnancy

There is currently a bill before Parliament that would give women who have experienced miscarriage access to bereavement leave, but it’s been pointed out that this could easily be changed to encompass any other loss of pregnancy. With New Zealand’s laws requiring women to make multiple appointments to fulfil the requirements to access an abortion, many women require time off work. That’s not to mention the emotional and physical recovery time needed. Unless they have understanding employers, women can be forced to take leave without pay or even lose their jobs. Don’t interrogate your staff, but if they do trust you to speak about their situation, give options for extra leave and support.

9) Donate to the cause

Stump up some cash for the hardworking organisations that champion reproductive rights in Aotearoa. ALRANZ (Abortion Law Reform Aotearoa New Zealand) advocate tirelessly for better access to abortion. Family Planning (the place you pocketed free condoms from during high school) provides advice and support to women seeking contraception and abortions. Donations allow them to continue their important work.

10) Talk to your mates about it

Men need to be speaking to other men about issues that affect women’s bodies. It’s not enough for women to be the only messengers. As long as the conversation remains solely the domain of people with uteruses, reproductive rights will always be abstract nice-to-haves in the minds of people without uteruses.