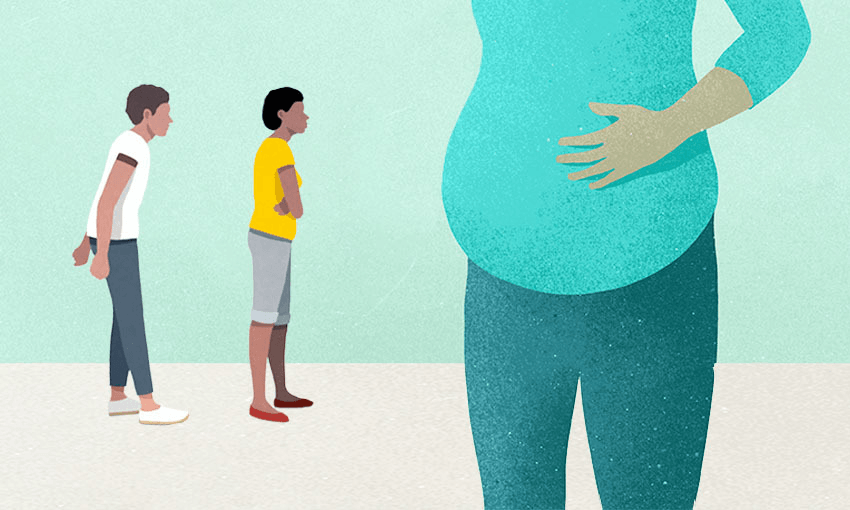 In Aotearoa, parents who conceive via a surrogate must formally adopt a baby who was always intended to be theirs. Now, a member’s bill looks set to change a time-consuming, expensive and exhausting process. It’s about time, writes Hannah Gibson.

At its essence, surrogacy is about people working together with others, centrally the surrogate, to fulfil their dream of having a family. For three years as a part of my anthropological research, I immersed myself in the complex world of surrogacy in Aotearoa, and found that the existing laws around adoption and surrogacy were one of the most loathed and archaic parts of the journey for new parents and surrogates alike.

Surrogacy is an option in Aotearoa for those who cannot have a baby via “natural” conception and gestation. Two types of surrogacy are legal on an altruistic basis. The first, gestational surrogacy, which involves in vitro fertilisation (IVF) and a mandatory ethics process, is where the surrogate gestates a foetus with which she has no genetic relationship. The second is traditional surrogacy, where the surrogate uses her egg and self-inseminates at home with a syringe to conceive.

Gay couples, single cis-gendered men and trans women can have a baby via surrogacy. However, they cannot have a baby without the help of a woman or trans man willing to donate their eggs and/or gestate their foetus. Heterosexual couples also choose surrogacy when they are unable to conceive and/or gestate the foetus for a variety of reasons including infertility due to a medical condition, cancer treatment, or something unexplained.

It is after the baby is born that things become problematic under the current laws. One the baby is born, intended parents must adopt them, despite one or both usually donating their genetic material. This legal requirement is based on legislation, Status of the Children Act 1969 and the Adoption Act 1955, created before gestational surrogacy became possible.

The surrogate and her partner/spouse are documented as the “birth parents” and must legally “give up” the baby for adoption. In turn, the person/couple the surrogate carries for must prove themselves worthy to social workers, and the judicial system, of being parents to a baby that was always intended to be theirs.

Anna and her husband Peter were expecting a baby with the help of Ruby, their surrogate (all names and identifying details are changed to ensure anonymity). They had to undergo several interviews and home assessments to determine their suitability as parents. This process also requires the disclosure of any criminal offences. Anna and Peter had two different social workers, one who made them feel like strangers to Ruby and the impending baby, and another who was kinder.

When their baby boy was born, he was poorly. After such a long wait, Anna stood helplessly as doctors worked on her son. Thankfully, his vitals stabilised. When Anna and her husband took the baby home, she wanted to do nothing more than cuddle with him. He was finally theirs. Before doing so, Ruby and Anna had to confirm with social workers that they still intended to go through with their plan.

Once home, Anna and Peter had had no desire to go out into the world just yet. Like many new parents, their initial “routine” was to sleep, feed, nappy change, burp their baby, and cradle him around the house, singing songs and willing him to fall asleep. Repeat cycle.

Anna and Peter’s lawyer filed an adoption order with the Family Court. They also paid for Ruby to have a lawyer representing her. The court date would be six months later. While they enjoyed this initial period with their son, it felt like a liminal phase. Anna trusted Ruby, but at the back of her mind, she knew that Ruby could take the baby back legally. Thus, adoption day became known as “D day”, when she could breathe freely. The same goes for Ruby, who waited eagerly because the process felt wrong to her.

The judge reviews the social work reports and other information to process adoptions via surrogacy to decide legal parentage. This is time-consuming and expensive, and pushes everyone into a state of unnecessary limbo when the parents are cocooning with their new baby. It also creates barriers for those who may not have an extra $10,000 for the adoption process. Perhaps, they could spend this raising the baby.

Most of my research participants see it as a necessary evil, a tick box to achieve their dream. However, our current laws make little sense because they do not represent people’s reality. The baby has loving parents already; it just so happens not to be the surrogate (or her partner). While everyone involved knows this, the law still requires people to go through the process.

A possible solution to better meet their needs might be to transfer legal parental status from the surrogate to the intended parents after the baby is born. This provides the surrogate bodily autonomy during pregnancy and birth and has less stress involved post-birth.

My conversations with people who have never been involved with surrogacy concur; most see the adoption process as archaic and unnecessary. However, the conversation usually gets a bit thorny in cases of traditional surrogacy when the surrogate donates her egg and gestates the baby.

Some people see a difference between gestational and traditional, thinking that the surrogate’s genetic connection, and gestation of the foetus, changes things. It blurs the lines around parentage further in their minds.

It makes sense that they would find it more challenging to think about. For example, when people talk about reproduction or “the family”, they imagine a heterosexual married couple who conceive a baby (via intercourse) inscribed with a fusion of the mother and father’s genetic material. Furthermore, despite diverse types of families existing, the heteronormative nuclear family continues to be privileged in law, policies and medical spaces.

Laws and policies responsive to the increasing dynamic versions of families should not force people to present themselves as something they are not. Of course, this would not reduce the need for ethical consideration and support for people to navigate their journeys safely. Still, it would signal that diverse families and parenting are valued as important as normative family forms.

The Law Commission is currently seeking public consultation on its review of surrogacy in New Zealand. Submissions close on October 1.