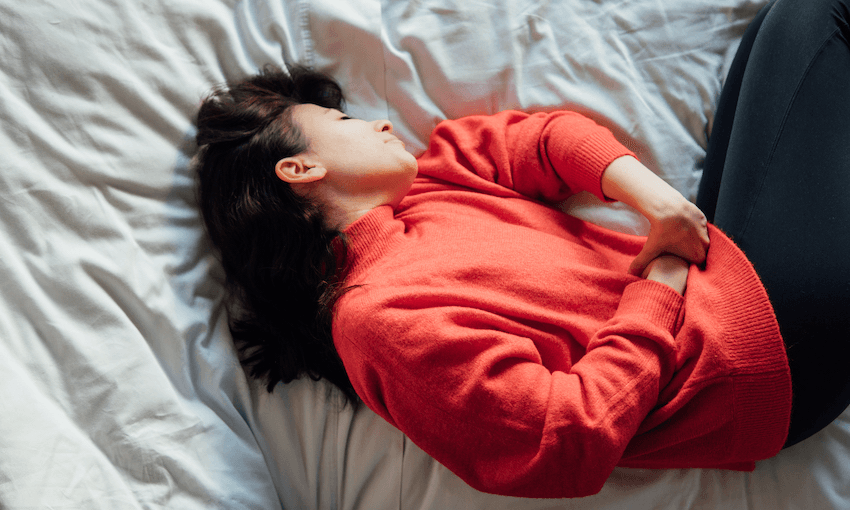 Having surgery was the best thing I ever did. Everybody deserves the option.

I am 10 days post-surgery. Everyone seems surprised at how well I’m doing. There’s just one group who get it, who understand why I’m so happy. They’re those who haven’t yet been able to get the surgery that I’ve had.

Last Monday, my uterus, fallopian tubes and cervix were removed in a total hysterectomy. In the lead-up to my surgery, whenever I said I was having a hysterectomy, people asked if I was OK. Some said, “But you’re so young!’ Others just looked at me sadly and said they hoped I was coping OK.

My friend who also suffers from endometriosis said “I am so jealous”. Another friend with adenomyosis almost cried with joy for me. Not one friend who is surviving with chronic pain felt sorry for me. They knew how lucky I was.

Endometriosis is an inflammatory pelvic disease where tissue similar to the lining of the uterus is found in places outside of the uterus. Adenomyosis is a condition where the inner lining of the uterus breaks through the muscle wall of the uterus. I have – or had – both conditions. I’m lucky that I had two babies and now I can get my cursed uterus out of my body. Everyone who has a hysterectomy has a different story, but for me I couldn’t wait to get the fucker out. And I know I am one of the very lucky few who could do it.

Twenty years ago I had my first surgery to treat endometriosis. I had three more over the years and then I had my two babies. This will be the last surgery I will have to have. I’m asked if I’m in pain post-surgery. I have had organs removed but it’s not even a fraction of the pain I was in before.

I have spent years crying on the floor of my bathroom, my face pressed against the tiles unable to stand. I have spent years showering four times a day, the scalding hot water being the only thing that dulls the pain. I truly believe I didn’t need pain relief during my births because my period pain was worse than delivering an 11 pound baby. I have missed years of work. Missed birthday parties, and dinners out, and socialising and just feeling like a human. I have felt disconnected from my body for so long I wondered if I’d ever feel safe in it again.

And now, 10 days post-surgery, the future for me has never looked brighter. My back pain is gone. My puku pain is not even close to what it was. I feel better than I have felt in a year.

But I am lucky, my surgery was private. I am waiting on the bill. Estimates have said it could be up to $34,000. I have cried buckets over the idea of going into debt for surgery. But what do you choose? A life of debt is still a life and I was barely surviving before this surgery. The pain was relentless. I’d have done anything to make it go away.

I am in a position of privilege compared to others who do not have the credit history to take large loans or do not having housing stability or food security to spare even a dollar. I can’t afford this surgery but I can get loans. Others can’t. I’ve had many of these brave people contact me. Their stories are harrowing.

Endometriosis New Zealand had calls from 568 people desperate for help during the seven-week lockdown. Chief executive Deborah Bush says those who called were heartbroken by their surgeries being cancelled without being rescheduled. If you have severe endometriosis, you’ll know the emergency department is often a place you have to go to seek urgent pain relief. In a global pandemic, Bush says many said they were too frightened to go.

Of course surgery cancellations are unavoidable during a lockdown. But people with endometriosis were failed before Covid-19 came here. Bush says government inaction in supporting two key endometriosis initiatives during the lockdown period only made things worse.

First, the government and Ministry of Health failed to support the implementation of long-awaited clinical guidelines for the treatment of endometriosis, launched at parliament in March.

“There was satisfaction that we managed to get the clinical guidelines across the line after 12 years of pushing for a formal pathway for all New Zealand health professionals to follow when diagnosing and treating endometriosis,” says Bush.

But despite support then, requests for funding have been “met with silence”, she says. “This lack of ministry follow-through has delayed the prospect of more timely diagnosis and best-practice treatment for the 130,000 New Zealand women and girls living with this debilitating disease.”

Bush says endometriosis takes eight years on average to diagnose. Some patients are as young as 10 and 11. My endometriosis began from my first period at 13. I remember my first GP telling me “periods are painful”. It wasn’t until I had a woman GP that I was diagnosed through surgery.

“Once picked up, it’s absolutely vital that treatment is appropriately tailored to the individual patient, with doctors empowered to think endo first when seeing a patient with debilitating period pain, lower back pain, IBS symptoms, abnormal menstrual bleeding and pain with sex,” Bush says.

Without clear clinical guidelines in place, endometriosis can be missed. Gynaecologist Michael East is calling on the government to act immediately to stop that happening.

“There are few medical conditions that significantly damage the health of around 10% of the female population at some stage in their lives, so it makes no sense to ignore it.”

Endometriosis New Zealand says its bid for $50,000 funding from the Ministry for Women’s $1 million-dollar Covid-19 Community Fund was rejected. Bush says the sum was requested for the EndoHelp online, phone and telehealth service, which supports hundreds of endometriosis survivors, including the 568 who contacted the organisation for support during lockdown.

“We missed out, which was extremely disappointing,” says Bush. “While taking nothing away from the other worthy community projects selected for the Covid fund, we felt our bid warranted closer consideration.”

Endometriosis New Zealand would like to see a nationwide online rollout of its school education programme to support earlier detection. The Menstrual Health and Education programme was taught in 50 secondary schools last year thanks to philanthropic funding.

“Published data shows 27% of young Kiwi girls are missing school every month due to their symptoms, which interferes with their education, limits their future careers, risks their mental health, future fertility and their ability to maintain employment and contribute to society,” says East. “It’s unfathomable to me that for a small investment, the government could not possibly support a small initiative like this which would most certainly change lives.”

I can only speak for myself, but in 10 days my life has changed. It will only get better. And that should not be something only some of us can have. Everyone has the right to options for a pain-free life.