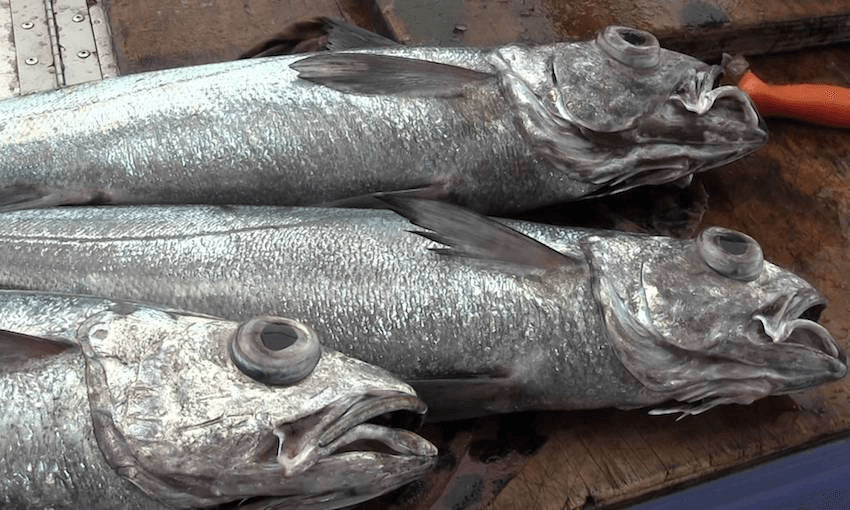 Hoki is one of New Zealand’s most valuable export fish. Image: YouTube CC-BY-SA

We’ve had evidence of hoki dumping for years. Why did no-one act?

Hoki is one of New Zealand’s most valuable export fish. Image: YouTube CC-BY-SA

For decades, New Zealand consumers have bought hoki on the assumption that it is a sustainable and properly managed fishery. That’s far from the truth, write Otago and Auckland University researchers Elisabeth Slooten; Bruce Robertson; Glenn Simmons; Graeme Bremner, and Nigel Haworth.

New Zealand’s hoki fishery has come under renewed criticism this week after leaked reports revealed that some of the country’s biggest fishing companies had been systematically under-reporting their catch by hundreds of tonnes.

Hoki is one of New Zealand’s most valuable export fish. The Marine Stewardship Council (MSC) has certified hoki, ling and southern blue whiting fisheries as sustainable, and it is currently undertaking a regular review of the hoki certification. We consider that it may be rubberstamping flawed information from the Ministry for Primary Industries and the fishing industry itself.

Fish dumping in the hoki fishery has long been investigated and documented in government reports and scientific journals, but the MSC appears to have ignored this evidence.

There is undeniable evidence about illegal catch, dumping and impacts on marine mammals and other protected species.

Research by one of us (Graeme Bremner) found clear evidence of illegal fish dumping and other forms of misreporting of catches in the hoki fishery off the South Island of New Zealand. In addition, several other compliance investigations and government reports have consistently reported serious concerns about illegal and unsustainable practices in the hoki fishery since the early 2000s. For example, Operation Bronto involved 43 port inspections, 20 vessel inspections at sea, and 11 fishing trips on which government observers collected data. Data were compared from vessels with and without observers on board.

During Operation Bronto in 2011, the Ministry for Primary Industries identified significant non-compliance relating to catch reporting, fishing practices and misreporting of bycatch, among other issues. This included reporting incorrect weights, quantities and species. Operation Bronto revealed that the hoki fleet was good at reporting the amount of fish brought back to shore for sale, but poor at reporting the actual catches at sea.

Some crews discard the least valuable part of their catch so as to maximise their profit, a practice known as “high grading”. The catch is sorted by length and weight, and the less profitable fish are dumped at sea. This results in serious damage to fish stocks, both of hoki and bycatch species, and corrupts the data that fisheries managers need to ensure the fishery is sustainable.

There are other serious issues with the hoki fishery. It kills marine mammals, including New Zealand sea lions, fur seals, common dolphins and dusky dolphins. It is also a threat to Hector’s and Maui dolphins found only in New Zealand coastal waters. More than 500 fur seals have been caught in the fishery in the last five years, and the government estimates that more than 200 are caught each year.

Observer coverage is low in most New Zealand fisheries (about 8.4% in deep-sea fisheries and less than 1% inshore). This means that bycatch is underestimated. There is not enough data on marine mammal bycatch for hoki and other New Zealand fisheries, which makes it impossible to determine whether this impact is sustainable.

Seabirds are also killed or injured by trawl gear. Large seabirds such as albatross can get struck by the trawl warps, while smaller seabirds get caught in the net when it is on the surface during deployment and retrieval.

The Bronto report made 45 recommendations to solve these problems, including closing spawning areas to avoid impacts on juvenile hoki and closing some areas to trawling, which is a particularly unselective fishing method.

Operation Trois also found significant under-reporting due to a number of non-compliance issues across the entire southern blue whiting fleet. MPI’s 2013 report contains 25 recommendations, similar to those of Operation Bronto. It is disturbing that these purportedly secret reports were shared and discussed with industry representatives. An implication might be taken from this that industry consultations may have had an effect on implementation or not, of the 70 recommendations.

In short, Operations Bronto, Trois, and Maxi, among others, show that the effectiveness of New Zealand’s Quota Management System and MSC certification is profoundly compromised by the quality of the data used to set the Total Allowable Catches (TACs).

We consider that a thorough, independent peer review would have discovered these data on systemic illegal activities in the hoki and southern blue whiting fisheries, and would have resulted in both losing their certification. Meanwhile, consumers have bought New Zealand hoki for almost two decades, assuming that the fishery is sustainable and properly managed, when it has not been.

Regardless of the outcome of the MSC process, hoki exports to the United States may well be banned. The new US fish import rule requires that New Zealand fisheries prove within a few years that they have accurate estimates of marine mammal bycatch, and systems to determine whether these deaths are sustainable. This requires marine mammal population surveys and much better data on how many marine mammals are caught.

The Ministry for Primary Industries itself admits that fishers are entrenched in a cycle of non-reporting, as discarding is a systemic failure of the current system.

The challenge is to have robust data and processes for fish stock assessments. The government must critically evaluate the quality and quantity of scientific information used to determine the impact of fishing on the marine environment, on all stakeholders, and on reaching total allowable catch decisions. Other challenges include the need to assess the ecological sustainability of fisheries in the face of climate change and other stressors.

The consensus among scientists is that we lack the fundamental data upon which the sustainable management of our fisheries must be based. Without adequate data, we will be constantly surprised by new challenges, whether overfishing or disease, or through climate change.

Most New Zealand stock assessments rely on catch data provided by the industry, rather than on independent surveys. This approach was one of the reasons for consistent overestimation of Canadian cod stocks until they collapsed in 1992.

We argue that two things need to happen, at a minimum. There must be a comprehensive statutory inquiry into fisheries management including the Quota Management System, and the government must invest in rigorous, independent stock assessments so that we are making decisions on the basis of the best possible data. Already innovative thinking has been undertaken on an alternative resource rental model of fisheries management. Importantly, a resource rental model can meet commercial and recreational, and, crucially, Māori interests.

We acknowledge the contribution of Philip Clarke, a former forensic scientist and fisheries compliance investigator for the New Zealand Ministry for Primary Industries.