He’s been popping up all over central and south Auckland, and his moves have found him local TikTok fame. So who is this mysterious dancer? Jihee Junn caught up with him for a chat.

The first time I saw him dancing was from a TikTok I’d stumbled on late last month. Crossing the road at a set of lights near Sylvia Park mall, he’s swinging his arms and dropping to a squat without a care in the world for the cars driving by. The video, which currently has over 100,000 likes and 2,500 shares, has been flooded with comments from users reporting similar sightings from across the city. Soon enough, I stumbled onto dozens more videos of this mysterious figure dancing on High Street, dancing on Queen Street, and dancing several more times near the Mt Wellington mall.

Who is this guy? What is he thinking? And what is he even dancing to anyway? I was determined to find him and ask these important questions, because whoever he was, he clearly had a vibe and energy the internet just seemed to get: “This is his world, we just happen to live in it,” wrote one commenter. “We’re side characters, he’s the main,” replied another.

Luckily, this being New Zealand and all, a handful of commenters seemed to know who he was. I manage to track him down easily enough on social media and when I message him he instantly agrees to meet. Over lunch at a cafe, he tells me his name is Khải Phạm, a 16-year-old high school student who moved to New Zealand from Vietnam in the middle of 2019. Around the same time, he says he started dancing for fun, watching tutorials on YouTube to learn.

“I mostly dance K-pop,” he says, citing girl groups Iz*One and Loona as two of his favourites, as well as celebrity choreographer Lia Kim. “A lot of [Kpop groups] use techniques to make like a drawing, and I really like it when they use a lot of members to make [their formation] into a picture,” he says, adding that he’s currently keen to learn different styles of dancing. Phạm is impeccably dressed for our meeting: he’s draped in a striped oversized shirt paired with fishnet gloves, his ears adorned with almost a dozen black and silver earrings. He seems nervous at first but quickly becomes comfortable as we talk, similar to his experience of starting – unintentionally – to publicly dance in the first place last year.

“I don’t really know why but whenever I listen to music my body just starts moving without me knowing,” he says. “I was a bit shy dancing in public [at first] but then slowly throughout the year I was like ‘oh, my body just moves on its own!’ and I just let it be, because not a lot of people in New Zealand mind it so I thought maybe it was alright.

“I’m aware that some people look at me but I don’t really mind much. I thought ‘just let them be’. I’m enjoying life and minding my own business.”

Phạm says he first found out about his viral fame when friends sent him TikToks people had filmed of him dancing. While he had no idea he was being filmed, he says the positive response he’s received both online and off has been hugely rewarding. “After that video at Sylvia Park got posted, a lot of people were saying ‘oh, that boy makes me really happy after a stressful day’, and that makes me feel so relieved and happy.”

“Some of them also come up to me and say ‘I saw you on TikTok and you’re so cool, I’m your biggest fan’ and then some people say ‘oh my gosh, you’re my inspiration’ and I find it so cute. Some of them ask for my photos and stuff too.”

Despite the overwhelmingly positive response, Phạm does see the occasional nasty comment but says he doesn’t let those get him down. “Somebody told me to go to the ‘mental hospital’ and some people commented saying I should go see a doctor, but the thing is, I don’t really care. I’m just curious why they would do that,” he says. And bar one slightly creepy real life experience when he was followed and harassed by a man trying to mock his dancing, he says he’s never had anyone come up to him and say bad things to him offline. 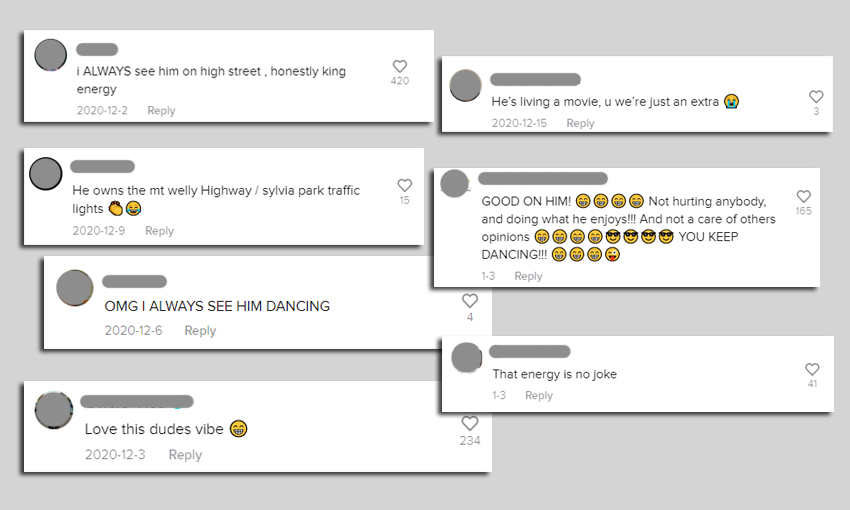 “Life is short, just do whatever you want. As long as it’s not harmful or anything like that, you do you. And if it makes other people happy, that would be so good. Even if people try to say bad stuff about you, don’t be offended – be curious. Ask why they would do that. You don’t have to feel bad, you didn’t do anything wrong.”

With that sage advice in mind, we part ways as Phạm goes off to meet with friends and make the most of what’s left of his summer holidays. Although he doesn’t plan to make his claim to fame more than a hobby – he says he eventually wants to study hospitality or early childhood teaching – Phạm says he’ll continue dancing as long as he’s enjoying it, wherever that might be. And if he keeps things up, he might just become one of the most recognisable figures to grace Auckland streets, because when I go up to the counter to pay the bill, one of the staff asks: “Isn’t he that dancer? My friends say they see him in the city all the time.”