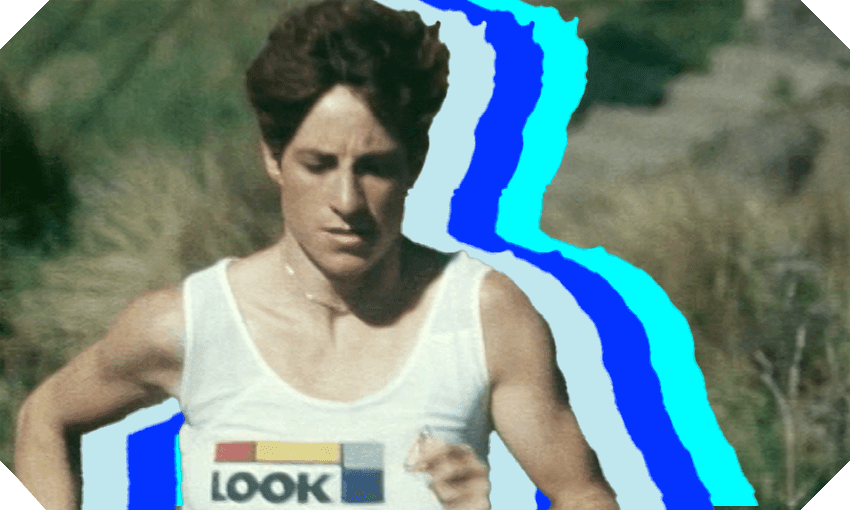 By Natalie Wilson
Guest writer
Made possible by

Erin Baker started 121 triathlons in her career. She finished first in 104 of them.

On a freezing road in Almere, Amsterdam, Erin Baker’s bike tyre punctured. It was 1985 and for 120 kilometres, the 23 year-old had led all but a few of the best male athletes, knuckles first, through atrocious conditions in the first Ironman Triathlon European Championship. Now, cracking her icy grip from the handlebars, she tried to summon the fine motor skills required to change the tire.

Elsewhere in Almere, her coach gripped a warm drink, watching the misery unfold on a café television. He saw Baker, hands frozen to the bone, unable to budge the hard rubber of her tyre. He saw a well-meaning bystander grab the wheel, ignoring her protests that any help would mean disqualification. He saw her fend the shocked, would-be hero off with a swinging bike pump. Then, he saw Baker tear the tyre off her wheel – with her teeth. She got back on the bike, and nine hours and 26 minutes after the starting gun, she won.

“I did what I needed to do to win events and if I had to chew a tyre off I did it.” Nearly four decades later, Baker rationalises the incident that earned her the name Animal, quickly clarifying “I pulled it off, I didn’t eat the tyre.”

Baker’s coach (a title he reels back to “advisor” or “partner in crime”), former NZ Champion triathlete John Hellemans, was used to her rabid determination by the time he watched her gnaw the bike. A year or so earlier, she opened their coaching relationship with a bold, cold call from Australia, seeking tips for Sydney’s Royal National Park Triathlon – an event in which her bike seat immediately broke, prompting her to ride the 40km cycle leg standing. It was her first ever triathlon. She won.

After a handful more triathlons and equal number of wins, Baker and Hellemans crossed paths. Baker got straight to the point. “I am Erin Baker,” she told him, “and I want to be world champion one day in this sport.” Hellemans remembers smiling to himself and thinking about it, then shrugging: “why not?”

Baker was ready and willing to sacrifice her lifestyle and career for the higher cause, and it wouldn’t be her first rodeo. Only a few of years prior she had fled Christchurch to Darwin after losing her job and gaining a criminal conviction protesting the 1981 Springbok Tour – actions inspired her mother Mary Baker, who was the Christchurch chairperson for Coalition Against The Tour. “[Mum] was just incredibly aware of justice. So I think justice was our thing.”

Mary is widely credited with being the first person to actively demonstrate against the Springboks when she found herself returning to New Zealand on the same flight. Having her pre-takeoff pleas ignored, Mary declined breakfast in the morning and with the all-white team trapped under meal trays, marched the aisle with a sick bag placard she’d crafted overnight, reading “SHAME”.

On land, Baker rolled with the young radicals, participating in sit-ins, blocking roads and other non-violent actions. In Nelson, this meant trying to stop the Springbok bus getting to the game, however this time the penalty was heftier than being held in a squash court until game’s end. Baker was arrested and prosecuted in the High Court for the serious offences of possessing and throwing an explosive at police, under the Arms Act. True to form, Erin doesn’t sugarcoat what she threw that day when asked – but says it wasn’t an explosive.

Back in Christchurch and training full-time, the first event on the to-do list was the 1985 Toohey’s International Ironman in New South Wales. A 4km swim, followed by a 180km bike ride, topped off with a full 42.4km marathon run. It was Baker’s first event of this length. She won, by 40 minutes.

“I trained full time. I just trained. I didn’t know what I was doing.” Blind preparation for her maiden Ironman involved drafting in the wake of Olympic swimmer Brett Naylor, 170-odd km round trip bike rides to Akaroa or Ashburton or somewhere else you really want a car to get to, and running countless kilometres on the Sumner Hills – all in the same day.

Muscle memory fired up from a Kaiapoi childhood spent in the Rangiora Pool, on her bike (a seventh-birthday Baker tradition) and cross-country running. Also firing was that competitive mentality which had struck fear into poor children strapped to her ankle for three-legged-races since the early days.

“I didn’t know it, that other people weren’t like that,” the now 60-year-old reflects. “When I was just a primary school kid, definitely no older than six… I was so nervous about sports day.” Baker would even stress about the fun races. “I was running to win, or to be first, or to be competitive… Probably parents stood on the sideline and thought, ‘Oh, that girl’s a nightmare’.”

“[Erin] wasn’t very good at team sports,” Maureen Baker agrees, with that sparkly mix of fondness and piss-taking that only a sister can nail. “She is just very black and white about how someone should participate. She would get frustrated with people in her team that didn’t want to put the same amount of energy or effort into the game. So best that she went the singular, solo route.”

After the Toohey’s Ironman slaughter the solo route led to more established triathlon circuits overseas. Maureen joined as manager – her bright orange hair visible in grainy YouTube videos of Erin busting finish line ribbons across Europe. Not in America though, where the money and the prestige were greater. That pesky conviction meant no visa.

Despite living the career-limiting consequences of fighting for justice, Baker continued to voice her protest – this time against inequalities of gender.

Triathlon’s relative infancy meant sexist prize money disparity wasn’t as extreme as in other sports; even by Baker’s account triathlon was “fairly equal” from the outset. But there were also less blatant injustices – men’s cash prizes running deeper into the finishers or the overall winner (always a man) receiving a car. As in 1981, Baker risked her career to right these wrongs. The world champion used both her presence and her absence to demand fairness, boycotting events which didn’t have equal prize money and showing up at the International Triathlon Union (now World Triathlon) Congress to talk inequality. Equal prize money was soon regulated in the sport and remains cast into triathlon’s governing body’s rules. According to Hellemans, “that was led by Erin Baker.”

By 1986, Baker’s absence from the Hawai’i Ironman World Championship had become a lose/lose situation that also needed righting. Despite having international race stats that read like a vertical line of 1s, only occasionally interrupted by a 2nd place finish, Baker imagined a footnote “but she doesn’t do Hawai’i”. There are hazy recollections of a late night phone call from America, something about the event-aligned International Management Group, something about someone campaigning someone who may have been a senator… Whatever the case, mere weeks before the 1986 Hawaiian Ironman, Baker’s elusive Visa materialised. But Baker wasn’t ready. She ended up cycling off the course and straight to her hotel.

A year later she was better prepared, but not for the cramping. She was leading, again, but having stopped to pick up a hat from the road, her leg seized and she stood like a statue, unable to move. Once again her coach watched on, this time from the side of the road, among a crowd of spectators who had fallen silent at the sight of Baker clutching her leg. He saw women she had been leading start to whizz past. He saw her slowly straighten up. Then he saw her awkwardly hobble ahead, unconvinced she would be able to restart her run, let alone finish the race. She won.

By the time she retired in 1994, Baker had entered 121 races and won 104 of them. She had nine World Championships to her name across short, medium, and Ironman distances – something Maureen compares to being both a marathon and 100m sprint champion. She was named Triathlete of the Decade by US Triathlete Magazine, won New Zealand’s supreme Halberg Award and was added to the World Triathlon Hall of Fame.

These days Baker still cycles the Port Hills for enjoyment, but harbours no desire to keep her own sporting legend alive. She only kept one trophy (which the Christchurch quakes took care of), and convincing her to film Scratched was a years-long effort. In the end she only agreed to do it in the window between selling her orthopaedics business and whatever she does next.

One morning, nearly half her life ago, she decided not to get out of bed for a race again. And she never did  – except for a final event which was already locked in. She won.