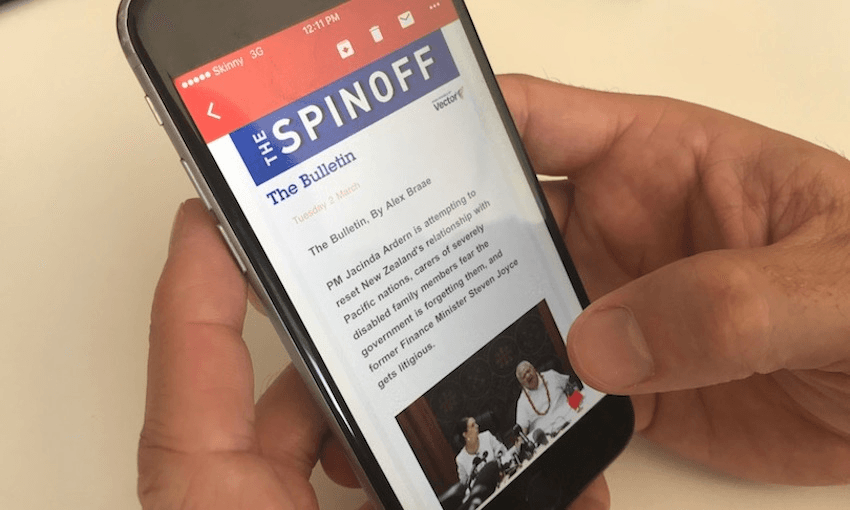 Tomorrow, with the support of Vector, The Spinoff smashes a bottle across the bow of a new email newsletter rounding up the best and most important NZ news of the day. We think it will become an important part of your morning.

For all the complaints about the state of journalism, the one you won’t hear is there isn’t enough of it. We may no longer huddle around kitchen table with the morning newspaper or settle down on the couch for evening news hours, but the fires, despite everything, run wild.

“Journalism has never been better served by vibrant, young talented people who write with originality, flair, passion and, sometimes brilliance,” wrote one of New Zealand’s giants of journalism, Donna Chisholm earlier this year, in response to a familiar monotone of disdain about the State of Things. She’s dead right, I think. Brilliant and important work in news and features, in opinion and data analysis and illustration, flourishes every day.

But it isn’t always easy to find. The online click race lends a sugar-high quality to the front pages of news sites. Very often the pieces that matter get bumped down or off the page in favour of trivial imported news and facile commentary. The social feeds become similarly clogged. You don’t click on the snackable tosh and shallow reckons? You’re a very good person, or a liar.

Many if not most of us have outsourced the task of news distributor to the social channels. I’ve long relied on Twitter, where the smart publications and the smart people have helpfully pointed me in the right direction, but of late I’ve found more heat than light on the platform (don’t @ me). Facebook is a much more powerful news distributor. But as the great algorithmic imperator swivels away from journalism, prioritising what Mark Zuckerberg calls “meaningful social interactions” at the expense of news in your feed, it’s doubtful whether they really give a shit about quality journalism at all.

We’ve been thinking all of this for a while at The Spinoff (where we’re very willing to admit sugar in our diets) – about how to champion the best parts of the very good journalism produced in New Zealand. And tomorrow we launch what we hope will be a contribution, a small but important contribution, to doing that. It’s called The Bulletin, and it takes the form of a morning newsletter that arrives through the relatively antique medium: email. Subscribe and you’ll get the essential news items from across New Zealand media – short summaries of what matters, free of the candyfloss – in your inbox as the clock strikes 7am.

The Bulletin – which would be impossible without the sponsorship of our friends at Vector, whose support for the idea of celebrating the best of NZ news media is genuinely heartening – differs from your bog-standard email newsletter insofar as it’s not a rundown of the scribblings on The Spinoff, but a roundup of the best and most important news from across every platform in the country.

Richard Llewellyn, Vector’s head of communications, gets it: “Vector is more than a little excited to be partnering with The Spinoff on The Bulletin. The Spinoff audience is smart, diverse and cares about New Zealand’s future. That’s a care Vector shares as we strive to create a smarter, more informed and more sustainable energy future. In a world where trust is being eroded by misinformation or by too much information, it’s good to be reminded there is always a huge amount of quality journalism out there. We look forward to helping bring some of the best and most important stories, to help inform inquisitive New Zealanders every day.”

The task of scouring every part of the media falls to Alex Braae, who joins us from Newstalk ZB, where he has been working as a producer and online news editor. Alex will be burning the dawn oil to sift out the essential reads, and after he rubs his morning eyes, working as a writer across the site.

Alex will be reading it all. The Herald and the NZME titles, Stuff and its stable of papers, RNZ, Newshub, TVNZ, Newstalk ZB, Waatea News, the NBR, the independent newspapers, Newsroom, North & South, the Listener, Metro, Vice NZ, the Wireless, Prime News, Māori TV, Politik, The Spinoff, the blogs, the outlets I’ve forgotten to include (do @ me). We’ll always link out to those sources, whether paywalled or not. And it will be there, like the lovely thump of a newspaper landing on your lawn, in time for breakfast.

It won’t be just news, either. Scroll down the newsletter and Alex and everyone at The Spinoff will be cheering on good writing – not just good writing: good-anything on the internet – and urging you to go look at it. And if there’s something you read that matters, tell Alex, and he’ll push it wider.

This is a big deal for us, and we hope you’ll give it a whirl.