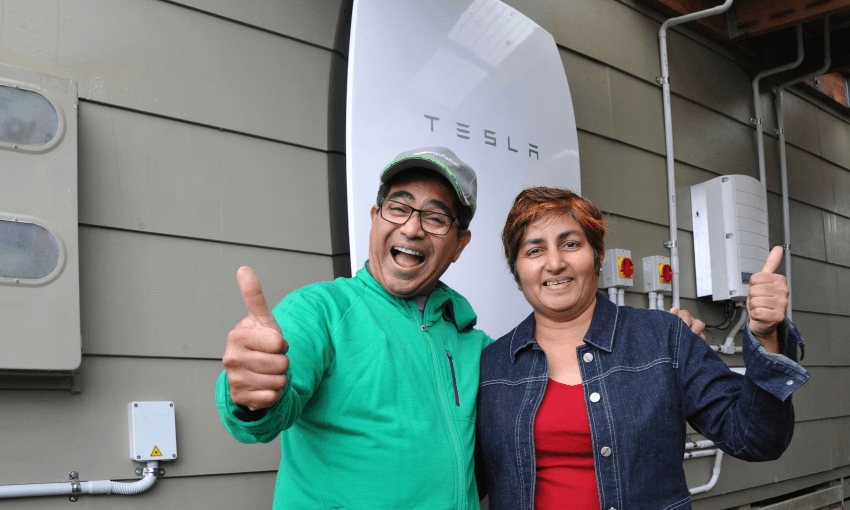 A couple in Auckland who received solar panels and a Tesla Powerwall home battery as part of Vector’s Future of Energy competition in 2015.

The future of energy is pretty fancy, but not impossible

By Andre Botha
Guest writer
Made possible by

A couple in Auckland who received solar panels and a Tesla Powerwall home battery as part of Vector’s Future of Energy competition in 2015.

Ever considered making and selling electricity from the comfort of your home or business? While that might sound like some dodgy online scam, it’s not as far-fetched as you might think, writes Vector’s Chief Networks Officer Andre Botha.

You’ve read the news stories already: technology is evolving and everyone’s an innovator these days and the robots are coming for your jobs. While the consensus is still out on that last one, the energy sector truly is being transformed through innovation and new technology globally.

All the ways in which people and businesses use energy is rapidly changing. The development, integration, and use of new energy technologies like solar panels, storage batteries, and electric vehicle chargers on our electricity network is on the rise.

How you receive, use and store your energy in ten years’ time will be significantly different to now. Can you remember how your day played out before the iPhone was launched in 2007? How you had to physically go to the bank or sit at a desktop to transfer money? Or how you got around in a new town before clicking open your Google maps app? Or how you had to get the camera out of its case, somehow find focus and then hope that precious moment was still there to be photographed? Ten years is not that long.

Picture this: you’ve just arrived home in your electric vehicle from work. It’s been a sunny day while you’ve been at the office, so the solar panels on your roof have generated enough energy to fully charge your energy storage battery. Because it’s the evening in winter, everyone after work is getting home and turning on the heater, the television, and appliances in the kitchen in preparation for dinner.

Energy retailers are in the business of selling you electricity, obviously, so the price of using power has gone up from earlier in the day (fun fact: the price of electricity is subject to change every 30 minutes). But it’s all good – you’ve got a full storage battery, so you use that to power your home. And while that’s happening, you’ve also plugged your electric vehicle into the wall – not to charge it up, but to discharge the energy you’ve got left in your car’s battery to sell onto the Auckland energy network and make yourself a little bit of money.

At the end of the night as you’re getting ready for bed, you reverse the charge of your car battery so that you’re filling it up for the commute to work tomorrow – either from what’s left in your storage battery, or directly from the power grid now that the price of electricity has dropped again. The next day while you’re at work, it’s sunny again, so you’ve got another full storage battery at the end of the day, and you repeat the cycle.

It sounds futuristic. But it wasn’t that long ago that the idea of solar panels powering homes was scoffed at – now they’re being made compulsory in all new homes in California. Once upon a time when people heard the word batteries, AAs were the first thing to come to mind – now batteries keep Australians from losing power during power outages in record time.

As the company responsible for providing power to Auckland, and as the country’s largest electricity distributor, Vector has embraced and led this change. It means a change to how we operate our network business, but that’s not a bad thing. Instead, we’re investing in the technology, solutions, and systems available to us now that will provide you the choice of how you receive, use, and store energy. It’s about making the right choices and providing customers options to support Auckland’s long term interests. With a projected $2 billion of investment required on Vector’s network to meet growth in Auckland over the next decade, we know that the money can only be spent once and if we get it wrong, it’s Aucklanders who will foot the bill.

On top of all that, climate change is placing limits on the amount of carbon society can afford to release into the atmosphere.  As the cost of carbon rises, increased economic pressure will encourage the shift to clean energy, which is already starting to happen. At times that the network is not available, such as during a big storm or a draught in the catchment areas of New Zealand’s hydro lakes, this change will give you more options to manage your own resilience, to ensure choice and good economic outcomes for all of Auckland.

Vector Lights on the Harbour Bridge is a symbol of the new times we are entering. It is the first main bridge in the world to have all its lighting needs fully met by solar and battery technology. For us, we hope it serves as a reminder to you and Aucklanders that times are changing; you have more choice; and that Vector understands that change, and will provide you the options to exercise your choices.