Ben Fahy learns how biodiesel is made and its role in a lower carbon future.

After a detailed safety briefing, I put on my glasses and hi-viz and head out on a tour of the plant. Carpenter checks to see if his personal gas detector is working and Reid talks about how the fire systems are able to detect invisible flame (methanol, one of the ingredients used in the process, burns clear).

“We’re in a state of chronic unease,” says Reid, which is a very good attitude to have when you’re surrounded by fuel.

We scale the steps beside the huge tanks that hold the biodiesel and when we reach the top we gaze out over the industrial hub of Wiri. Hundreds of cars and trucks zip down the southern motorway, planes fly overhead, a Firth plant next door noisily makes concrete. You can almost, as David Lange might say, smell the carbon dioxide on the city’s breath, so it’s hard to stomach the fact that the plant isn’t currently producing anything.

In May 2020, around five years after construction of the plant kicked off, it was forced to go into hibernation, with around 15 employees made redundant. Z had invested close to $40 million in the plant, from the design and construction to the tweaking required to make a high-quality product at scale. But tallow, an inedible byproduct of the meat industry that makes up 95% of the ingredient cost for its biodiesel, had pretty much doubled in price due to global demand from suppliers selling into subsidised biofuel markets, and the international diesel price had dropped significantly due to Covid-related lack of demand.

“As long as it could break even, the business would go for it,” says Reid, the biodiesel operations manager. “But it just didn’t stack up. We were losing money by selling it.” A few weeks ago, however, there was a glimmer of hope.

“I was up north fishing when Wayne called me and said the prime minister and a few others were coming for a visit to the plant. We didn’t know much about it,” says Carpenter, the biodiesel lead operator.

During that visit, Ardern, transport minister Michael Wood and climate change minister James Shaw announced a range of measures aimed at reducing the carbon emissions of our transport fleet, from eventual electrification of the public transport network to tougher emissions standards for vehicle imports. They also agreed in principle to a mandate for a lower-emitting biofuel blend to be used across the transport sector.

Not long after, the Climate Change Commission released its draft report and Transpower released its Electrification Roadmap, both of which emphasised the need for a reasonably acrimonious divorce from fossil fuels and a much better relationship with electrification and other fuel sources like hydrogen for heavy transport.

It’s hard to imagine a company that makes most of its money from selling prehistoric trees and animals that explode in our engines being very excited about looming decarbonisation. In this particular divorce settlement, they’re likely to lose the kids, the house, the bach, and all the good silver. But Z chief executive Mike Bennetts has openly talked about how the company can play a role in speeding up that transition – and biodiesel is a solution that already exists.

You can make biodiesel out of any sort of fat, says Reid. Whalers used blubber in their lamps. Some farmers mix up batches to use in their tractors or furnaces. And occasionally you see stories of people going around restaurants slurping up the oil to eventually use as fuel. For training purposes at Z, staff actually turn vegetable oil into biodiesel so they understand what the pair say is a relatively simple chemical process.

Carpenter brings out three vials that show what it starts out as (much like lard) and what it ends up looking like (much like water). When it is added to a tank of standard diesel at a five percent blend rate, it has around four percent fewer greenhouse gas emissions than a tank of regular diesel. Running at its capacity of 20 million litres per year, the plant is able to provide biodiesel that is the equivalent of taking 17,000 diesel vehicles off the road.

Reid says if we stop making diesel vehicles now, “we’ve still got 50 years of diesel vehicles around”. The Transpower report also mentioned boilers used for ‘process heat’, which can take even longer to replace than vehicles as they’re often a bigger investment.

“We need different energy sources for different uses,” Reid says. “In ten years, I see lots of electric and hydrogen vehicles, and a biodiesel additive in every fuel to reduce the carbon footprint.” A vision into the future at an electric vehicle charging station at a Z Energy station. (Photo by Fiona Goodall/Getty Images)

The only place in the country you can currently fill up with any of the biodiesel Z produced before pausing production is the Highbrook truck stop in East Tāmaki (this is mixed with imported biodiesel from Australia to ensure supply). Just two big business customers – NZ Post and Dempsey Wood – are currently willing to pay for the more expensive Z Bio D option for its fleet.

“I don’t think people are aware of it. It hasn’t been a thing. We haven’t rolled it out far enough for it to be well-known in New Zealand,” says Reid. “But the more it’s in the public eye and the more the prime minister and high-profile companies like Air New Zealand talk about it, the better.”

Aviation is (or was, before the world stopped travelling due to Covid-19) responsible for around 2.5% of global carbon emissions, but that’s expected to grow by 2030. Transpower believes domestic flights could be electrified, but long-haul flights are a bigger challenge. Air New Zealand has a partnership with Z to explore options for a sustainable aviation fuel and CEO Greg Foran was also part of the prime minister’s visit to the plant.

“We would need to build a new plant for that,” says Carpenter. But, as the government regularly points out, we can reduce our emissions and create economic growth: it’s estimated a sustainable aviation fuel facility would create 1800 permanent jobs and require 6000 staff to build it. 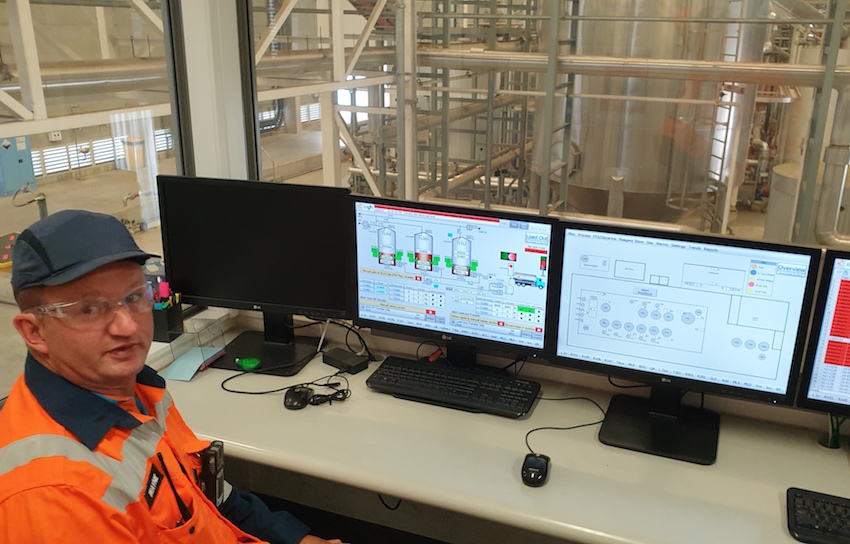 A cross-government working group has been set up to engage with fuel suppliers and industry to shape up the details of a mandate, including when it would be realistic to implement biofuel blends.

“We want a timeframe,” says Reid. And when that date and number is set, then it’s a race to see who can find the sustainable supply that’s required.

“Then it will be a level playing field and the rest of the industry would also need to invest,” says Carpenter.

There’s a fine line in business between being too early and getting first-mover advantage and last year’s decision appeared to put Z in the former category, but Carpenter says they have built up their expertise and IP to deploy when the time is right, so if – or when – the mandate comes, he thinks the company will be well positioned as a market leader.

“It’s been a trying process. There’s been a lot of trial and error, but we’ve learned a lot in the past four or five years. Our knowledge has increased substantially and that knowledge is now here in the country.”

Reid says if the mandate for biofuels comes and production needs to reach, for example, 450 million litres to fulfill it, there will need to be some major collaborations (and potentially a lot more imports).

“But the potential for reduction in greenhouse gases is huge. There are lots of options,” says Reid. “But we will need to make as much of this fuel as we can. Then the challenge will be who can make it the cheapest.” The easiest way to do that is through economies of scale, or buying tallow in bulk. In some countries, they grow soybeans to turn into fuel, but Reid believes using a waste product (20 years ago, it was just buried) rather than a potential food source is a much more sustainable approach. But it could also start making biofuels from other ingredients.

“Having a facility that could take multiple streams of ingredients would be the ideal process. Whatever is around you can blend it in,” says Reid.

At this stage, New Zealand legislation allows a maximum blend of 7% biodiesel within its diesel specifications. Higher blends can be used, but need to be labelled biodiesel, and customers would need to have the necessary conversations with their vehicle manufacturers on the maximum amount of biodiesel that can safely be used. Many trucks and tractors can run on higher blends of 20% and Z successfully trialled a 20% mix in a ute from Wellington to Ruapehu.

California and parts of Europe use very high blends of advanced biodiesel (also called renewable diesel). Renewable diesel is more difficult to make, and so more expensive than conventional biodiesel. They can afford to do this because of significant subsidies or other incentives. (They say New Zealand’s biggest supplier of tallow sends most of it to Singapore, with the end product then going to California and Europe; biodiesel that’s not up to vehicle standards can be used in furnaces).

Step on the gas

“Before the announcement, I was a three out of ten,” says Reid. “Now I’m probably a seven.”

“There’s more positivity than there’s been for a long time and it’s reignited the energy in the whole company,” says Carpenter. “The people who have been invested in it for seven or eight years are very keen to make it succeed. They’re asking ‘when is it starting?’”

A number of countries have already embraced biofuels and clean car standards to try and meet their emissions obligations. And now it seems the New Zealand Government is on the brink of embracing them too.